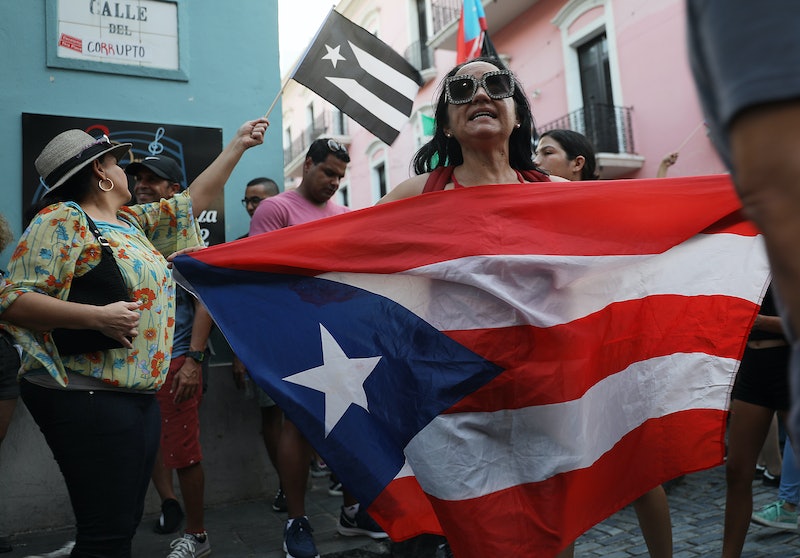 Puerto Rico is living through one of the most defining moments in its history. Boricuas are demanding the resignation of Governor Ricardo Rosselló in a wave of protests that swelled to national and international consciousness on July 15, when thousands of protestors marched through Old San Juan. The catalyst of these protests is a leaked private chat, released by Puerto Rico's Centro de Periodismo Investigativo, that revealed how Rosselló and other men from his administration handled confidential information, planned to attack public officials and journalists, including CBS’s David Begnaud, and mocked opposition and party members alike, such as San Juan mayor Carmen Yulín Cruz, with homophobic, sexist, and derogatory comments.

Though Rosselló apologized to the people his comments had offended on July 11, saying they were a way of blowing off steam after 18-hour days, he has refused to step down. For many Puerto Ricans, on the island and in the diaspora, the administration’s private comments represent the last straw, after over a decade of economic recession, ineffective austerity measures, and corruption scandals, even before Hurricane María ravaged the island in September 2017. And, to women across the island, these chats represent the evidence they need to take down a machista government that’s ridiculed and ignored the crisis of violence against women and the fight for women’s rights in Puerto Rico since they were sworn into office in 2017.

#TelegramGate, as the 889-page leak was named, is plastered with sexist comments. Some of the most aggressive and insulting messages come from the governor himself. When former New York City Council Speaker Melissa Mark-Viverito, who is Puerto Rican, denounced DNC chair Tom Perez and Rosselló’s pro-statehood party on Twitter, the governor wrote in the chat in Spanish, “We have to rally our people ... to go off on that whore.” Not only are his words loaded with misogyny, but suggest a culture of aggression inside the Rosselló administration against women who don’t agree with his policies and actions.

But the issue goes further than the childish remarks from a band of public servants on a private chat. #TelegramGate also revealed that the group ignored and rejected the demands of the Colectiva Feminista en Construcción, an organization that advocates for the rights of women and the LGBTQ community in Puerto Rico. In 2018, as the island faced a crisis of violence against women, the Colectiva asked the Rosselló administration to declare a state of emergency. The governor did not. Instead, he turned to the chat, where the group mocked the Colectiva. At one point, the group ridiculed a protest by the Colectiva, calling it “mediocre.” They also shared a picture, in which a member of the Colectiva wore a t-shirt that read, “Antipatriarchy, feminist, lesbian, trans, caribeña, Latin American.” Christian Sobrino, one of Rosselló’s closest aides, responded, “That explains so much!”

“The chat is a reflection of those violent policies that, for years, have been pushed and have threatened the freedom of women, especially poor and Black women,” Saadi Rosado, a member of the Colectiva Feminista en Construcción, tells Bustle. “The Colectiva has always known this is an oppressive and machista government.”

The trail of conversations makes it clear to me that Puerto Rico’s government is being run by a group of machista bros that belittle the suffering of Puerto Rican women, which has increased heavily since Hurricane María. ESCAPE, a non-profit that supports domestic violence services in the island, told Refinery29 it experienced a 62% increase in survivor-related services and a 47% surge in preventative requests. In 2019, seven women have been murdered in domestic violence cases, while last year, almost 30 were killed. The chat is evidence enough that, to Rosselló and his administration, women’s lives are a joke.

“For years, women have been fighting the misogynistic and sexist attacks from this administration. It should be noted that it’s not just the people in the chat,” Mayra Díaz-Torres, an activist from the Colectivo Ilé, a female-led organization that promotes social changes in the island, tells Bustle. “It’s been many public officers that have promoted violent misogyny inside the government — including women. But we’ve been here, fighting consistently.”

While Puerto Rican women took to the streets in early 2019, Rosselló and his chat publicly ignored it, and privately mocked it. They never welcomed the Colectiva Feminista or any other activist organization inside la Fortaleza, the governor’s mansion. They never declared a state of emergency. Instead, they opened the doors to singers Residente and Bad Bunny in an unplanned visit the artists broadcasted on their Instagram accounts, where these male artists advocated for action on the domestic violence crisis. (Bad Bunny paused his European tour in order to join protests on the island.) The chat revealed the governor and his team congratulated each other on the optics of the visit. Elías Sánchez, a lobbyist and member of the chat, asked the group, “Bad Bunny and Residente > Colectiva Feminista?,” to which Ricardo Llerandi, the current Secretary of Government, responded, “Obviously.”

“Rosselló’s stand is completely arrogant and alienated from reality. It’s a vivid example of what governing from privilege looks like, with the idea that his acts have no consequences,” Rosado says.

Feminist collectives have been at the forefront of the fight to remove Ricardo Rosselló from office in the past few days, mainly because his macharrán — brutish — attitude is only a mere reflection of what Puerto Rican women experience every day. We are not safe under the governance of a man who threatens attacks or calls us “sluts.” Puerto Rican women deserve better than to be ridiculed for demanding their fundamental rights.

“Their time is over,” says Rosado. “The same people they mock and attack, will be the ones who remove them from power.”

More like this
5 Ways To Stand In Solidarity With Women In America From The UK
By Sophie McEvoy
How To Fight For Reproductive Rights, Based On How Much Time You Have
By Courtney Young
Why You're Seeing Green Bandanas At Abortion Rights Protests
By Lexi Inks
Windrush Victims Are Still Waiting For Compensation
By Sam Ramsden
Get Even More From Bustle — Sign Up For The Newsletter