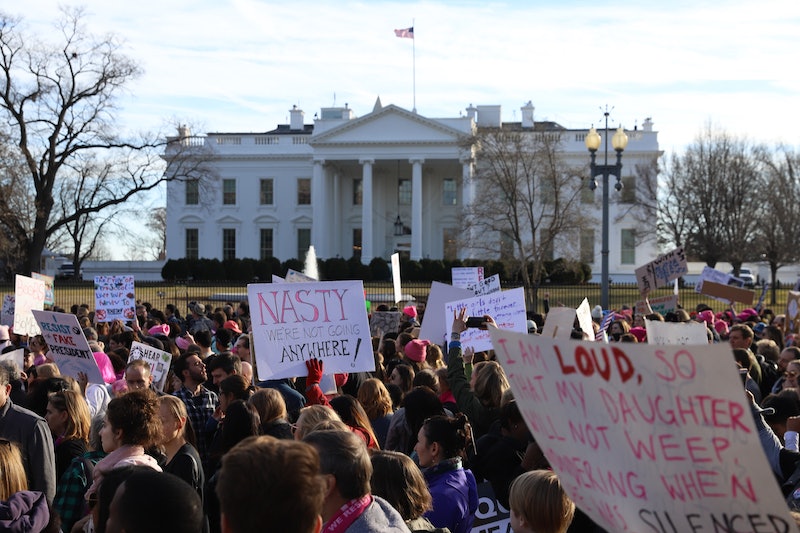 Back in August, the Trump administration proposed a rule that would limit protesters' right to assemble outside the White House and on the National Mall, prompting outrage from the ACLU and other civil rights groups. This rule would also allow the National Park Service to charge "event management" costs for protesting in these areas, which critics have described as a "protest tax." Experts tell Bustle that if instituted, the Trump administration's protest rule could endanger democracy by limiting free speech, as well as threaten grassroots organizing efforts.

The proposal is subject to public comment until Oct. 15. A spokesperson for the NPS, which manages these spaces, tells Bustle:

Should the comments we receive during this process indicate that cost recovery for First Amendment activities is something we should consider in the future, we would, of course, explore those kinds of legal questions. For now, we’re simply seeking the public’s views on whether we should look at ways to recover costs associated with ensuring public safety and the protection of park resources during these increasingly frequent and complex demonstrations in and around the National Mall and President’s Park.

But according to Dr. Kelly Clancy, an associate professor of political science at Nebraska Wesleyan University, this proposed rule is yet another effort "to use the National Park Service to continue its practice of stifling dissent." If such a rule had existed previously, Clancy says, it could have affected turnout at many groundbreaking protests, from the March on Washington in 1963 to the more recent Women's Marches.

"Protest is a fundamental American right," Clancy tells Bustle. "The National Mall is where we collectively demand that our government do better, that it become more accountable to its people, that it fulfill its democratic ideal. Charging to protest is in direct opposition to that right. The Constitution has no pay to play rule of free speech — it’s absolute."

The Danger Of Limiting Civil Liberties

Limiting protest space in Washington D.C. doesn't just make it more difficult for activists to hold elected officials accountable. Per Dr. Julia Hellwege, an assistant professor of political science at the University of South Dakota, such a rule could also mark a shift toward authoritarianism.

"Arguably, democracy exists on a spectrum, and when governments attempt to (or do) limit civil liberties, such as the freedom to assembly, this does have a negative impact on the level of democracy," Hellwege tells Bustle. "Many authoritarian regimes start as democracies, some turn authoritarian by making institutional changes (such as limiting elections) and some become authoritarian by limiting civil liberties, such as the freedom of speech, press, petition, and assembly."

Efforts to limit protests are not new in this country, and this administration has been especially hostile to certain protesters. As recently as September, following the first day of Brett Kavanaugh's confirmation hearing, Donald Trump told The Daily Caller that it was embarrassing to "allow protesters" in the United States that "in the old days, we used to throw them out." He has also repeated many conspiracy theories over the years about "paid protesters," arguing that Democrats paid people to infiltrate his rallies and to confront Republican senators.

But protests outside the White House haven't been restricted to the left, as Clancy pointed out. In 2009, the right-wing Tea Party led the Taxpayer March on Washington, in an effort to rally against big government. If Obama had tried to charge "event management" fees to those protesters, conservatives likely would not have taken that lightly, Clancy says.

Who Does This Proposal Target?

Dr. Suzanne Chod, an associate professor of political science at North Central College, tells Bustle that it will ultimately be up to the Supreme Court to decide whether the rule "is intended to disenfranchise a certain kind of citizen."

"The reaction is, as expected, partisan," Chod tells Bustle. "While the plan to charge protesters an 'event management' fee affects all protesters, the intent may be to immediately silence the groups doing the protesting now."

However, the fee that the NPS is proposing is likely to disproportionately impact activists and advocacy groups that have smaller amounts of funding and resources. According to Dr. Celina Su, the Marilyn J. Gittell Chair in Urban Studies at the Graduate Center of the City University of New York, limiting protest space in this way could "have a chilling effect on grassroots organizing" — especially because occupying public spaces is a crucial way for organizers to render their causes more visible.

"Grassroots organizers are already working on really small budgets," Su tells Bustle. "They're already a little worried about being censored by foundations or larger groups."

The government may argue that it is not explicitly outlawing protests, Su says, but imposing criteria like these fees can make protests prohibitively difficult to organize and attend.

"We don't want our speech to be dictated by who has more money," Su adds.

The Effects Of Restricting Peaceful Protests

While many experts agree that restricting protests through the implementation of fees and physical barriers could endanger public perception of democracy, Clancy and Hellwege both suggest that the Trump administration's proposed rule may actually prompt further protests. In fact, Hellwege says the government's efforts to limit protest location and size "may have an energizing effect on the population," compelling them "to react and to assemble."

Clancy, meanwhile, predicts that this rule, if instituted, may backfire; instead of quelling dissent, Clancy says, it could "force protesters to seek increasingly more radical methods of making their voices heard."

"When you take away that number of people’s power electorally, and then legislatively, and then strip away voting rights, and then try to limit their rights to protest over these things, you’re systematically eliminating channels of dissent, which forces radicalization," Clancy says, pointing to this moment in protest politics. "Those folks who have been disenfranchised have taken the fight to the streets, and to the rotunda, and really made this a moment of activism."