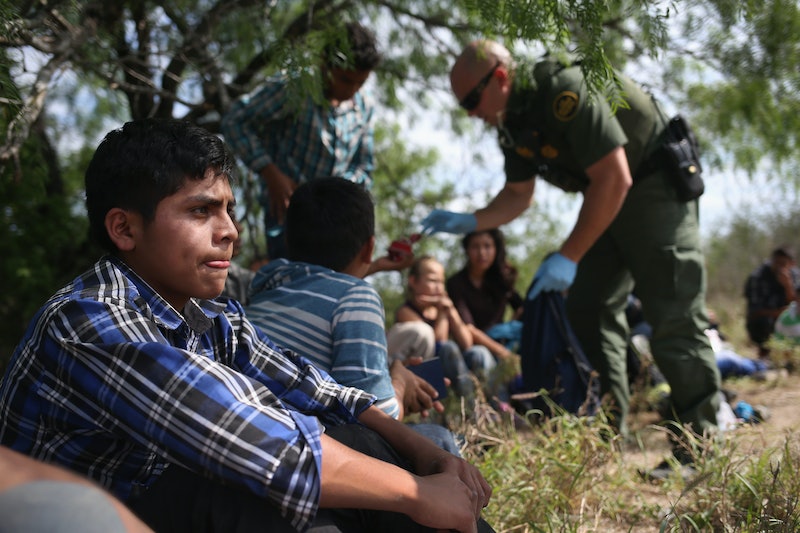 Over Easter weekend, the president launched into yet another one of his morning tweet storms, this time attacking what he called a "caravan" of migrants soon to arrive at the U.S.' souther border. That "caravan" is actually real — but there's a lot more to know about Pueblo Sin Fronteras and the group of migrants currently making their way towards the United States. Trump's tweets make it seem like a dangerous operation — but it's actually far more of a humanitarian issue.

"Border Patrol Agents are not allowed to properly do their job at the Border because of ridiculous liberal (Democrat) laws like Catch & Release. Getting more dangerous. “Caravans” coming," Trump tweeted on Sunday. "Republicans must go to Nuclear Option to pass tough laws NOW. NO MORE DACA DEAL!"

The "caravans" he was referring to is an annual program run by an organization called Pueblo Sin Fronteras, which means "people without borders." Every year during Holy Week, the organization helps a group of Central American migrants make their journey from their homes in Central America, hoping to request (and receive) asylum in either Mexico or the U.S.

Pueblo Sin Fronteras is an immigrants rights group, and they don't rally people to make the dangerous journey north; instead, they help band people together in order to make the trip as safe as possible. By mobilizing people, the group also attempts to call for an end to gang violence in the region and to protect people from domestic violence and extortion. They build shelters along the migration routes and organize these caravans, all with the aim of protecting migrants and helping them to maintain their dignity.

Pueblo Sin Fronteras said that they wouldn't respond to Trump's vitriolic tweet, but they did tell CNN that the trek was "a movement made of people who were forced to flee their countries of origin due to persecution and violence."

While Trump's tweets on the subject imply — or at least allow readers to believe — that the migrants are coming from Mexico, CNN reports that they've actually only assembled in Mexico after leaving from their homes in Central America. Many of them come from Honduras, where a disputed election just sparked a wave of violent protests.

But the people aren't all Hondurans. The three countries that make up Central America's "Northern Triangle," (Honduras, El Salvador, and Guatemala), have all seen a lot of gang violence and crime over the past several years, making them some of the primary sources of immigration to the U.S., despite Trump's focus on Mexico. The people in this caravan aren't doing it for fun, according to CNN's reporting — their aim is to get away from the poverty, crime, and violence that they can't escape without leaving their home countries.

This year, a BuzzFeed reporter embedded in the caravan reported that over 1,000 people are marching north in the group, with the plans of reaching the U.S. and then turning themselves in with requests for asylum. They've banded together for safety in numbers not only at border crossings, but also from smugglers and drug cartels. Their applications for asylum are far from guaranteed, however. According to CNN, 200 people from Central America marched with the caravan in 2017 — and so far, only three of them have seen their cases for asylum accepted.

The process of applying for and waiting for asylum in the U.S. can be a difficult one, and human rights groups argue that asylum seekers shouldn't be taken into custody while they're waiting to hear about the results of their applications. The Trump administration, however, has slammed some current immigration practices, specifically what it refers to as “catch and release” policies, as overly permissive.

Essentially, these practices dictate that border patrol agents can't detain and hold onto asylum seekers indefinitely while their applications are being processed. According to the Trump administration, though, this amounts to "legal loopholes" that are "exploited by minors, family units, and human smugglers, and are a magnet for illegal immigration," and the people whom border patrol is forced to release often simply disappear and become "part of the temporary, illegal population of people that we cannot remove."

In actuality, asylum seekers arriving in the U.S. are often detained, sometimes in facilities that separate family groups — which amounts to a violation of international law governing the treatment of refugees, according to UNHCR. Mexican Secretary of Foreign Affairs Luis Videgaray Caso, in responding to Trump's tweets, referred to the rights of asylum speakers.

"Every day Mexico and the US work together on migration throughout the region. Facts clearly reflect this. An inaccurate news report should not serve to question this strong cooperation," he tweeted on Sunday. "Upholding human dignity and rights is not at odds with the rule of law. Happy Easter."