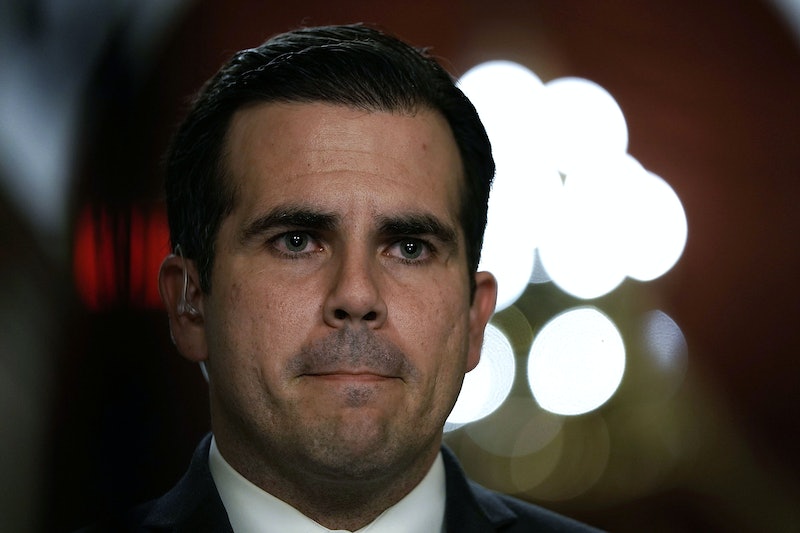 Last week, local Puerto Rican media published excerpts from a private messaging system that included misogynistic comments from the island's governor. In response, Puerto Ricans are protesting Governor Ricardo Rosselló's leaked chats, and calling for his resignation with #rickyrenuncia and #rickyrenunciacabron trending on Twitter. Rallies demanding he steps down aren't only happening in the U.S. territory either — similar events are being planned in the states.

The Puerto Rico Center for Investigative Journalism was first to leak the chat transcript, and you can read all 889 pages online in Spanish. The available transcript dates from the end of 2018 to January 20, 2019, and as the BBC notes, contains a number of derogatory comments about women, journalists, political groups, and political opponents, among others. In one instance, Rosselló called Melissa Mark-Viverito (the former speaker of the New York City Council) a "puta," the Spanish word for “whore," per The New York Times.

The leak happened shortly after two of Rosselló's former administration officials were arrested by the FBI on corruption charges. According to Puerto Rican newspaper El Nuevo Día, the Washington Post reported, one has pled not guilty. Though Rosselló was not directly involved, the arrests sparked some officials to call for his resignation, NPR reported. For example, Arizona Rep. Raúl Grijalva, who is also head of the Natural Resources Committee, released a statement saying, "The Puerto Rican people deserve a government that takes public service seriously, that's transparent and accountable, and that doesn't let this happen in the first place." The Natural Resources Committee oversees Puerto Rico as part of the island's status as a territory of the United States as well.

During a press conference on July 11, Rosselló apologized to anyone offended by his comments. Per CBS News, he said, "I'm the governor of Puerto Rico, but I'm a human being who has his faults. I ask for forgiveness." He called the private messages a form of tension relief in the midst of 18-hour work days. Per CBS, he added, "None of this justifies the words I've written. My apologies to all the people I have offended... This was a private chat."

According to the news network, other government officials who actively participated in this group chat include Ricardo Llerandi, Puerto Rico's Chief of Staff; Ramón Rosario, former public affairs secretary; Christian Sobrino, executive director of Puerto Rico's Fiscal Agency and Financial Advisory Authority; ex-representative of the Government before the Board, Elías Sánchez Sifonte; and Secretary of State Luis G. Rivera Marín.

Though Rosselló has apologized, he's made it clear in numerous statements that he has no intention to step down from his office. Per the BBC, Rosselló said in a statement on July 13, "I was elected by the people and I will continue the mission that was granted to me, now more than ever." Even so, he has indicated that all other government officials involved in the chat will be excused from the administration (Sobrino and Marín both resigned on Saturday). Per The Washington Post, Rosselló released a statement on Saturday which reads, “Aware that the current environment cannot be maintained, I have communicated to all the other public officials involved in the chat that I will have to dispense with their services and/or their advice."

Protesters demanding his resignation stood outside the governor's mansion in Puerto Rico on July 14. Per CNN, one man shouted into a microphone during Sunday's protest, "We will kick you out!," while other protesters chanted, "Ricky resign!" Several more protests are being organized for the city of San Juan, according to the news network. Additionally, CNN notes that a protest in Washington D.C. is scheduled for Tuesday in front of the Puerto Rico Federal Affairs building. And on Monday, a similar protest, organized by Frente Independentista Boricua, began in New York City around 5 p.m. EST. According to the political organization's website, the protest called for "the resignation of the entire Rosello regime" and "the start of the decolonization process in Puerto Rico."

In the midst of these protests, members of government are speaking out too. Representative Jenniffer González-Colón, Puerto Rico’s nonvoting member in Congress, said on July 13 per The New York Times, “I feel ashamed by everything being said in these private communications. The people are disgusted, disappointed by this telenovela.”

If you want to keep up with the protests, you can follow the #RickyRenuncia hashtag on Twitter, along with reporters like CBS national correspondent David Begnaud on Twitter; Begnaud has been tweeting coverage of the protests in Puerto Rico and providing videos and photos from the ground. Robby Cortes is another journalist based in Puerto Rico and covering the protests from the ground. Additionally, you can check in on the Puerto Rico Center for Investigative Journalism's site if you want to read the messages themselves. If you use Google Chrome, you'll receive an option to translate articles to English, but be weary of mistranslations.