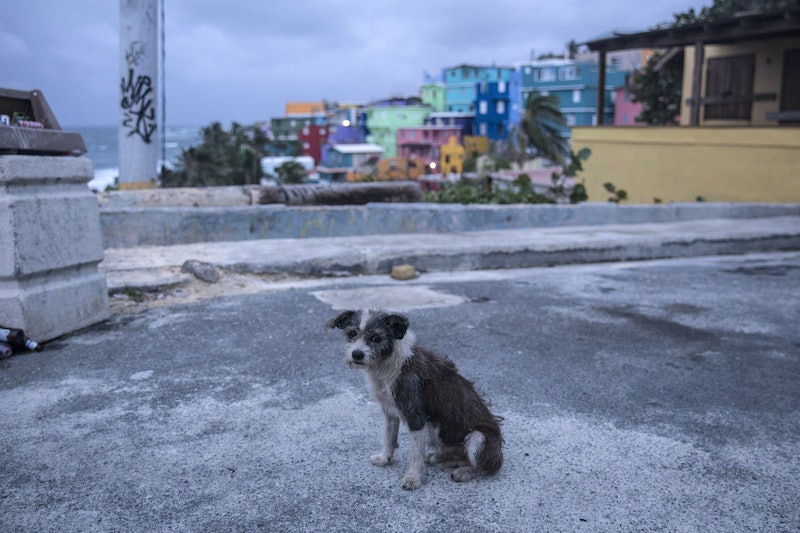 As part of the hurricane relief effort in Puerto Rico, the U.S. government has reportedly taken control of most cargo compartments on planes traveling between the mainland and the island. Though this helps guarantee there is space for emergency supplies, the embargo has produced an unexpected tragedy: It has severely limited the number of pets that can be evacuated from Puerto Rico at any given time, according to The Daily Beast.

Ric Browde, president and CEO of Wings of Rescue, a nonprofit that flies endangered animals to no-kill shelters, tells Bustle that on an average day his organization receives 100 "heart-wrenching requests" for the group to transport pets to safety.

"Wings of Rescue’s primary mission was to fly the dogs already in shelters to safety, to open up room for incoming pets displaced by the catastrophic storm of Maria," Browde says. But this has been complicated by the sheer number of people and animals seeking to evacuate.

Pets that weigh more than 20 pounds are reportedly banned from flying. And according to the report, nearly 2,000 locals are estimated to have been forced to abandon their pets because of the ban so far. Hurricane Maria made landfall on Puerto Rico on Sept. 20, but a month later, the U.S. territory remains devastated by the storm's impact. According to the Puerto Rican government, the electricity system is only working at about 22 percent of its capability. Other areas, like the number of open gas stations and grocery stores open, are slowly improving, but the emergency situation remains ongoing. Approximately 23,000 people are estimated to have flown into Orlando in the wake of the catastrophic Hurricane Maria, and there are reportedly tens of thousands still waiting to leave.

Sylvie Bedrosian, president of Pet Friendly Puerto Rico, told The Daily Beast that, as she understands it, planes arrive full of supplies but then, after dropping them off, leave nearly empty. "What bothers me most is that planes leaving the island are mostly empty," she said. "Why take custody of an empty cargo?” Bedrosian also told The Daily Beast that she believes the ban might violate the No Pet Left Behind FEMA Act, which reportedly authorizes FEMA to rescue pets after disasters and emergencies. No Pet Left Behind Act or not, unfortunately, Puerto Ricans are still unable to evacuate with pets weighing over 20 pounds. As a result, nonprofits like Wings of Rescue are trying to pick up the pieces. But it isn't as simple as it might sound.

"Unfortunately, it is not as easy as saying we are landing a plane at an airport, and bring your dog or cat and we will fly he or she back to the mainland," Browde says. "Health certificates need to be issued so the pets can travel, and we also need to have assurances that the people will have someone wherever we land, be it Fort Lauderdale or Miami — the two most likely cities — when we arrive."

Wings of Rescue doesn't have any shelters or kennel facilities, he adds, which poses a number of logistical hurdles. And beyond that, there are legal ownership issues related to how the nonprofit would have unclaimed animals vetted for travel, or what to actually do with those pets at the end of their journey.

The whole endeavor, Browde says, is also very expensive. "As a donor based charity, we need to be concerned about having the financial resources to do this, as we have already spent $3 million on hurricane relief and we are seeing donor fatigue," he says. Wings of Rescue has partnered with the Greatergood.org and the ASPCA to attempt to formulate solutions to these problems.

"Having personally flown 10 times on Wings of Rescue missions Puerto Rico over the last month, we recognize the tragedy these families (and by family we include humans and pets) have gone through and we can’t turn our backs," he says.

More like this
Read Dan Levy's Heartbreaking Message After The Club Q Shooting
By Stephanie Topacio Long
Iran Has Issued A Death Sentence Over Mahsa Amini Protests
By Catharina Cheung, Darshita Goyal and Maxine Harrison
If You Have Pets, You Probably Don't Realize You're Making These Common Mistakes
By Mackenzie Edwards
The 8 Best Walking Shoes For Metatarsalgia, According To A Podiatrist
By Lauren Moison
Get Even More From Bustle — Sign Up For The Newsletter