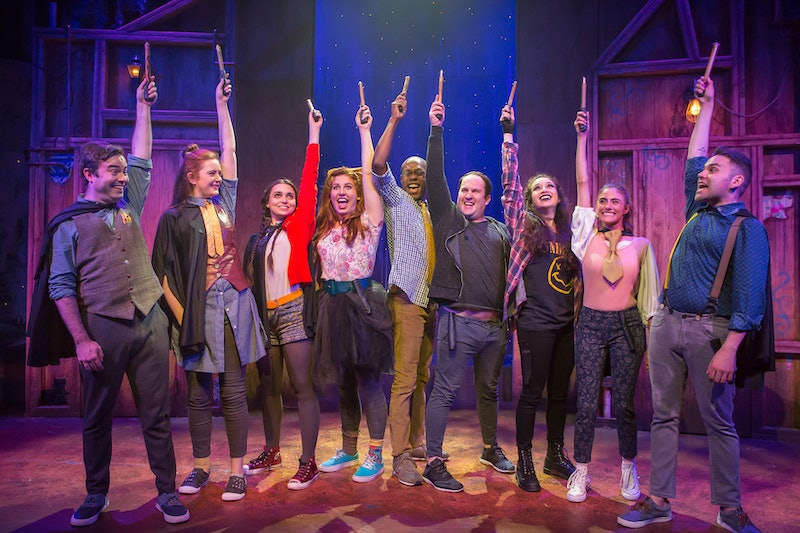 Hufflepuff, despite Harry Potter author J.K. Rowling counting herself among them, has long been deemed the underdog house. In the books they were relegated to background characters, and being sorted into Hufflepuff was talked about with fear of personal failure and disdain. But 10 years after the release of the final book in the series, it's time for the badgers to have some of the glory. And that's what Puffs, the play currently running Off-Broadway at the New World Stages in New York City, is doing every night.

The show is a Harry Potter-inspired comedy which chronicles "Seven Increasingly Eventful Years at a Certain School of Magic and Magic" and follows the story of the Puffs...who just happened to attend the same school as a certain, very famous, boy wizard from another House. We focus in specifically on three characters that are never mentioned in the books: Wayne, raised by his uncle in New Mexico and discovering magic for the first time; Oliver, a muggle born math genius who finds his skill unhelpful when it comes to spells and potions; and Megan, a rebellious witch with a Death Eater mom who finds being sorted into the Puffs a personal affront.

"There's relatively little on the Puffs in the series, in general, so Matt [Cox], Puffs playwright, wanted to reference as many of the known Puffs as possible; hence Zach Smith, Fat Friar, and some other historical Puffs on the portraits hanging in the house. Many have quirks and traits that are inspired by the series, but our world is seen through a Puff lens, so they're full of surprises," Kristin McCarthy Parker, Puffs director, tells Bustle.

And it's those surprises that are what makes Puffs a fun, heartwearming theater experience that any Potterhead will remember for years to come. There's Cedric, played here by James Fouhey as the earnest, if a little dim, hero of the Puffs. He is as handsome, talented, and tragic as we know him from the books, but he is also the ringleader of the House, spouting positivity and rallying the students to work hard for the House Cup, chanting "Third or Nothing!" Susan "Susie" Bones is a paranoid wreck, Hannah Abbott is sweet but gullible, and J. Finch is, well...you know.

But it's that mix of the known and the new that makes the show so special. And that extends to the actors who play the characters we love; Madeleine Bundy is both Susie and Harry; Jessie Cannizzaro is both Puffs student Sally and Draco Malfoy.

"Matt Cox has always done a great job of creating work with gender parity, and Puffs is no exception. It certainly wasn't something we had to shoehorn in, as there are a wealth of female characters in the books, but this distribution of characters was our starting point," McCarthy Parker says. "Having women play Harry, Malfoy, and others definitely felt natural to the team, as well as something Matt was interested in because it was both unexpected and very, very funny."

What won't be unexpected for a lot of fans is a story told with a diverse cast and feminist stance; in fact, it is something that the Potter fandom, especially in recent years, have called out about the original stories. And while J.K. Rowling undeniably wrote, as McCarthy Parker puts it, "brilliant, resourceful, endearing and flawed women who defy gender stereotypes" the truth is that fantasy (even in theater) is still mostly a men's club. Luckily for Puffs, though, the cast, crew and creative involved were not about to let that seep into the show.

"The entire creative team on Puffs was dedicated to giving our female characters this complexity. Megan probably underwent more revisions than any other character in the show, strengthening her journey towards self-acceptance as a Puff, especially in relation to her 'evil' mother," McCarthy Parker says. "Even as our characters age and mature, we try to focus on how they would most truly express themselves, not, for example, what we see in teenage rom-coms where the awkward girl suddenly 'gets hot.' We were very conscious of the material and genre we were commenting upon but wanted to give our female characters as much agency to be themselves as the male ones."

And although the play is laugh out loud funny (think a group of preteens knocking back bottles of Land O' Lakes "Butterbeers", plenty of 18+ Zach Smith outbursts and a certain ginger-haired best friend being portrayed as a mop) what audiences will walk away from Puffs with is the tenderhearted portrayal of true friendship, indescribable loss, and the true meaning of heroism...much like the Potter books themselves. Which is why Puffs is so much more than a parody.

"Our play is full of loving moments of humor directed at the series, but that's not the only story we're telling," McCarthy Parkers says. "One of the things we often hear from potential audiences is, 'I haven't read the books or seen the movies, so I'm not sure I'm going to get your play.' However, the heart of our narrative is a group of people who are growing up in a world where they feel like they don't belong, and that's a story you don't have to be a Potter aficionado to enjoy."

For more information on Puffs and for tickets, visit puffstheplay.com