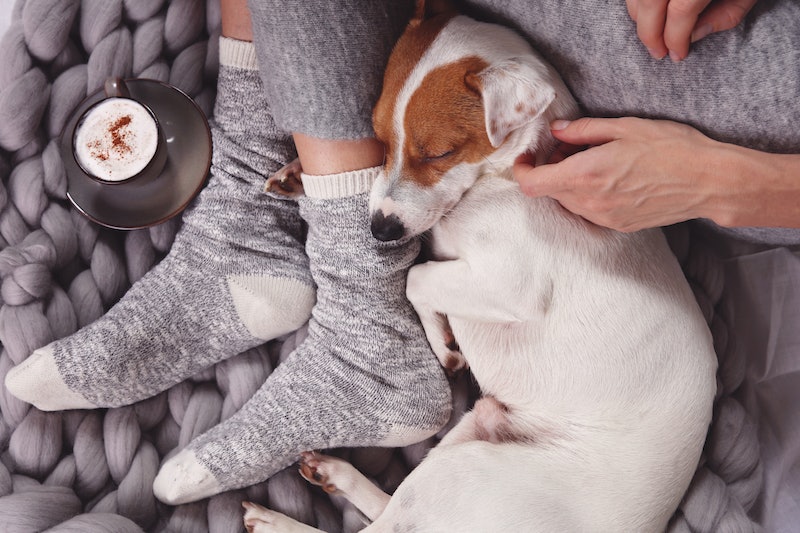 Anyone with a dog knows that their canine companions tend to have major FOMO. They don't like to be left out of anything, including the pumpkin spiced latte craze. Well my friendlies, tell Fido there's no need for FOMO because someone finally made a pumpkin spiced latte for dogs. Food & Wine reported that bakery chain Le Pain Quotidien is introducing a free "PAWmpkin Spiced Latte" on Oct. 26, which also happens to be National Pumpkin Day.

That being said, if you live outside of NYC, and you want to share a pumpkin spiced latte with your four-legged friend, you can make your own with this pumpkin spice latte recipe for dogs.

On the blog Cooking With Janica, you can learn how to quickly whip up a caffeine-free, Fido-approved pumpkin spiced treat that's safe for your pup to enjoy. Start with one cup of goat or coconut milk, one cup of pumpkin puree (not pumpkin pie mix), a pinch of ground cinnamon, and a dash of ground ginger. Put it all in the blender and mix for a minute. You can top with organic whipped cream (make sure it's xylitol free).

"The pumpkin is full of vitamins A and C, magnesium, potassium, and iron. It is also high in fiber, which helps with digestion," Jessica Pinney wrote on Cooking With Janica. "Traditional pumpkin pie spice contains a few ingredients that are harmful to dogs. In this recipe, I use only a small amount of cinnamon and ginger, which are both okay for your pup to consume. For the milk, you can use either coconut or goat. I used goat’s milk, which can aid digestion and help reduce inflammation."

Personally, I'm not a fan of pumpkin spiced lattes — IMO, they taste like some kind of cleaning fluid — but this dog recipe actually sounds like a divine dessert that can be enjoyed by both humans and pups alike.

If you have a dog like Pinney's dog Pearl who, "Ubers everywhere she goes, only eats gluten-free non-GMO free-range dog kibble, and can usually be found lushing around in athletic 'leisure wear,'" and you can't make it to Le Pain Quotidien on National Pumpkin Day to get your dog a pumpkin spiced latte, make them a homemade treat instead. Because it's fall, and there's no such thing as too much pumpkin.

More like this
Learning To Love, Not Judge, The Lunchbox Wives Of TikTok
By Esther Zuckerman
Ashamed Of Your Screen Time Stats? Here's How To Change That
By Alexis Morillo
How To Turn Off TikTok Profile Views So You Can Stalk Other Accounts In Secret
By Alexis Morillo
I Spent 2 Years Trying TikTok’s Dating Advice
By Kailynn Johnson
Get Even More From Bustle — Sign Up For The Newsletter
From hair trends to relationship advice, our daily newsletter has everything you need to sound like a person who’s on TikTok, even if you aren’t.