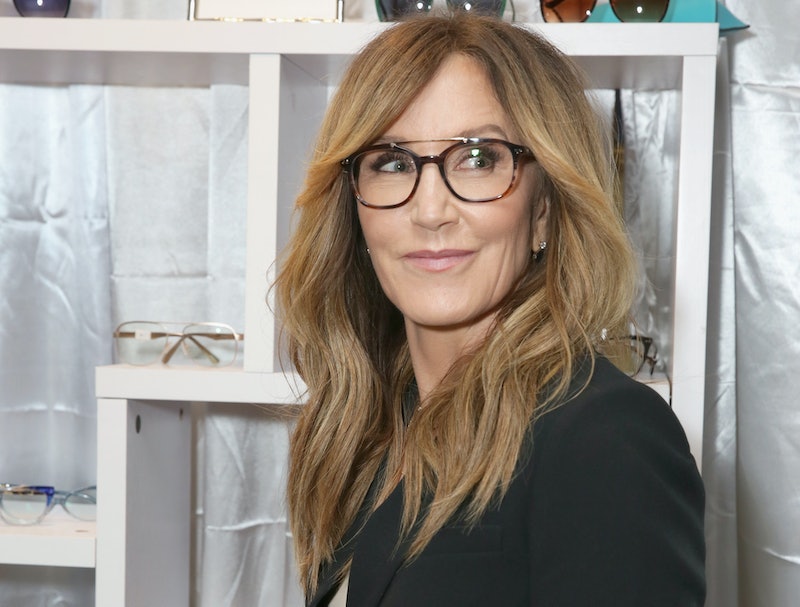 In a college admission scandal announced on Tuesday, dozens of wealthy individuals (including celebrities, CEOs, and more) have been accused of allegedly paying money to coaches and various administrators to get their kids into elite colleges. Two such individuals who have been charged in the scandal are a pair of well-known actresses — and based off of the crimes they've been charged with, punishment for Lori Loughlin and Felicity Huffman could lead to potential jail time.

According to a press release from the Department of Justice, Loughlin and her husband, Mossimo Giannulli, were both charged with conspiracy to commit mail and wire fraud. Huffman was charged with the same crime, per the release, though her husband, William H. Macy, was not listed as one of the nearly 50 people named in the scandal. Bustle has reached out to both actresses for comment.

Via CNN, the FBI confirmed Giannulli and Huffman were both arrested on Tuesday. The FBI served a warrant for Loughlin, CNN added, but an arrest hasn't yet been made, as she was out of town at the time.

According to the Federal Criminal Law Center, the maximum penalties for a wire fraud conviction are fines up to $250,000, and a prison sentence of up to 20 years. But given how much federal investigators allege the two actresses paid for their children to get into college, the cost of that fine might just be a drop in the bucket.

Per the federal court documents, Huffman has been accused of allegedly being involved in a "college entrance exam cheating scheme" for her eldest daughter, in which she supposedly paid over $15,000 dollars to participate. Specifically, federal investigators allege that William Singer, the owner of a college prep business, met with Huffman and Macy to explain that their daughter could go to a "controlled" testing center where a paid proctor would correct her SAT exam afterwards. Bustle has reached out to Singer for comment.

As for Loughlin, though her official charge is the same as Huffman, the circumstances around what she is accused of allegedly doing are a bit different. According to the federal court documents, Loughlin is accused of allegedly falsifying information about her daughters in relation to the sport of rowing, so that they could be designated as recruited athletes for the University of Southern California. The federal documents allege that Loughlin and Giannulli wired approximately $450,000 to Singer for their two daughters to get into USC.

Since Loughlin and Huffman's alleged circumstances aren't identical, it's possible that their penalties would vary, if they were convicted of the charges laid against them.

If you're wondering whether Loughlin's or Huffman's children were also charged in the scheme, the answer is they weren't. Authorities said at a press conference on Tuesday that no students were charged in the scandal because most of them didn't know their parents were allegedly bribing people to get them into college.

You can read the full list of the defendants, their case status, and information on their charging documents in this press release by the U.S. Attorney's Office for the District of Massachusetts.