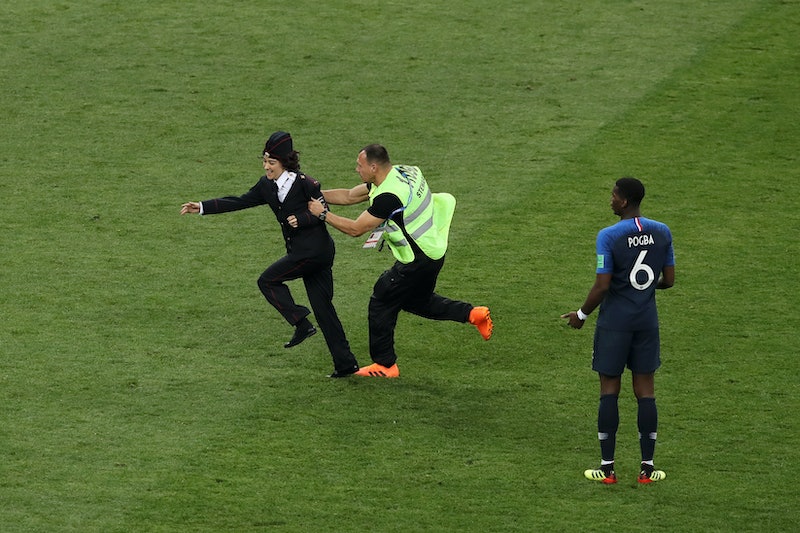 France beat Croatia 4-2 on Sunday for the 2018 FIFA World Cup. But before the final whistle was called, members of protest performance art group Pussy Riot rushed the World Cup field early in the second half of the game. "NEWS FLASH! Just a few minutes ago four Pussy Riot members performed in the FIFA World Cup final match," Pussy Riot posted on its Facebook page on Sunday.

The four — three women and one man, according to The Guardian — were dressed as police officers because of work by the Russian poet Dmitriy Prigov. "Prigov created an image of a policeman, a carrier of the heavenly nationhood, in the Russian culture," according to the post.

The post went on to detail six demands by Pussy Riot, which is an anti-Kremlin protest punk group based in Moscow. First, they demand the freedom of all political prisoners in Russia. Next, they want Russia to stop imprisoning citizens for social media posts, and to stop arrests at political rallies. The group also demanded "political competition" in Russia. (Russian President Vladimir Putin has made it more difficult to be a political opponent. For example, according to PBS, since Putin resumed the presidency in 2012, Russia raised fines for participating in "unauthorized protests.")

Pussy Riot's demands also include halting the fabrication of criminal accusations against all Russians, and ending unlawful detainment in jails. Finally, the group called for the return of the "heavenly policeman" as conceived by Prigov.

Pussy Riot member Olga Kurachyova told Reuters that she ran onto the field at the soccer match as one of the four protesters. She told the outlet she's being detained at a police station in Moscow.

Pussy Riot later released a video expanding on their demands and showing their members rushing onto the field during the second half of the final match. "Dear friend! Perhaps you know there is no rule of law in Russia, and any policeman may easily break into your life for no reason," one member of Pussy Riot said, in Russian, at the beginning of the video.

A second member then asked, "The FIFA World Cup has demonstrated really well how good Russian policeman may behave. But what will happen once it ends?"

All three members were dressed as police officers — likely in the same outfits they wore to rush the field in Moscow. "The conclusion and the only solution is the only one you should fight for: preventing fabrication of criminal accusations and arresting people for no reason," a third member added.

"In order for this to happen, you need one thing called political competition: A possibility to participate in your own country's life and be elected — for everyone," the first member said. They wore a pink ski mask.

"All these things are very simple, but you should decide for yourself what you personally can do so that your Russia would become more beautiful," the second member said, before pulling on their own pink ski mask.

When the four protesters ran onto the field at the 52nd minute, a member of the Croatian team, Dejan Lovren, helped police stop them, according to Vox. Another one of the protesters high-fived French player Kylian Mbappé, who was the first teenager to score a goal in a World Cup final match since the legendary Pelé.