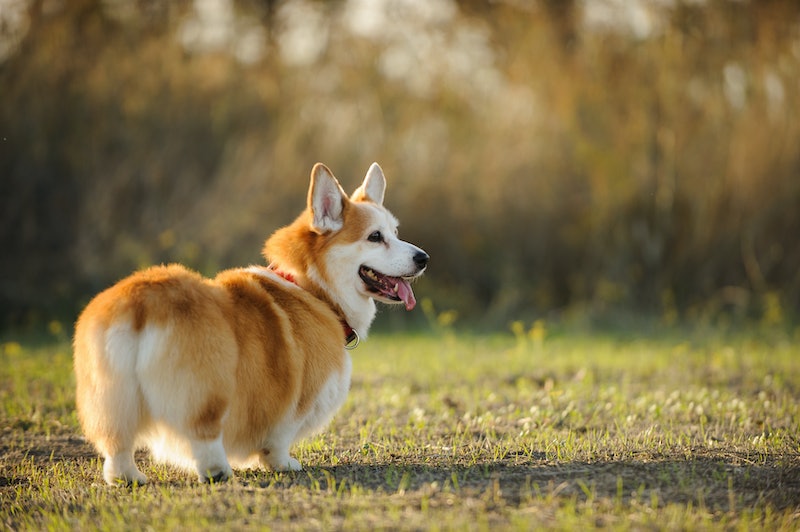 In sad news out of Buckingham Palace, Queen Elizabeth's last corgi, Whisper, has died. According to People, Whisper died about a week ago at Windsor Castle and was 12 years old. The Queen still has two dogs remaining, Candy and Vulcan, who are both "dorgis", dachshund-corgi mixes.

As with the loss of any pet, Whisper's death is reportedly hitting the Queen hard. The Daily Mail reports she and Whisper were very close, with a source telling the publication, "Whisper was a friendly chap and followed her everywhere." The death reportedly occurred while the Queen was getting ready for the state visit of King Willem-Alexander and Queen Maxima of the Netherlands.

If this news sounds familiar, that's because there was a similar story back in April. In the spring, Queen Elizabeth lost her corgi, Willow, who was 14 years old. At the time, Willow was referred to as the Queen's "last corgi", but this was only because Willow was the Queen's last corgi who was descended from her original corgi, Susan. Whisper was an unrelated corgi the Queen took in after Bill Fenwick, a gamekeeper at Sandringham House, one of the Queen's residences, died in 2016. According to the Daily Mail, the dog was originally named "Wispa", after the candy bar, but the Queen decided to change the spelling.

Before losing Whisper and Willow, the Queen also lost her corgi, Holly, in October 2016. Earlier that year, seemingly before the adoption of Whisper, Queen Elizabeth was photographed by Annie Leibovitz in honor of her 90th birthday. In one photo, she's shown with all four dogs: Holly, Willow, Vulcan, and Candy.

Of course, the many different corgis have appeared with the Queen over the years, but Holly and Willow, along with a third corgi, Monty, received worldwide attention during the 2012 Summer Olympics. Since the games were held in London, the Queen appeared in a video with Daniel Craig as James Bond as part of the opening ceremony. The clip, which ended with the Queen "skydiving" into the arena, included the three dogs, who were quite the scene stealers.

The Queen got her first corgi, Susan, as a gift from her father, King George VI, for her 18th birthday. (By the way, Susan even has her own, pretty lengthy Wikipedia page.) George VI previously got the family's first corgi, Dookie, back in 1933. Ever since then, corgis have been a part of the royal family. According to the New York Times, QEII has owned around 30 corgis descended from Susan, but she decided to stop breeding them because she doesn't want to leave any behind when she passes away.

As for the dorgis, the Guardian reports that they are also related to Susan. The Queen's sister, Princess Margaret, owned a dachshund, Pipkin, who mated with one of the corgis and contributed to this line of dogs.

Now that all of the corgis have passed, it's nice to know that the dorgis are still around. Their name might be ridiculous, but they sure are cute.