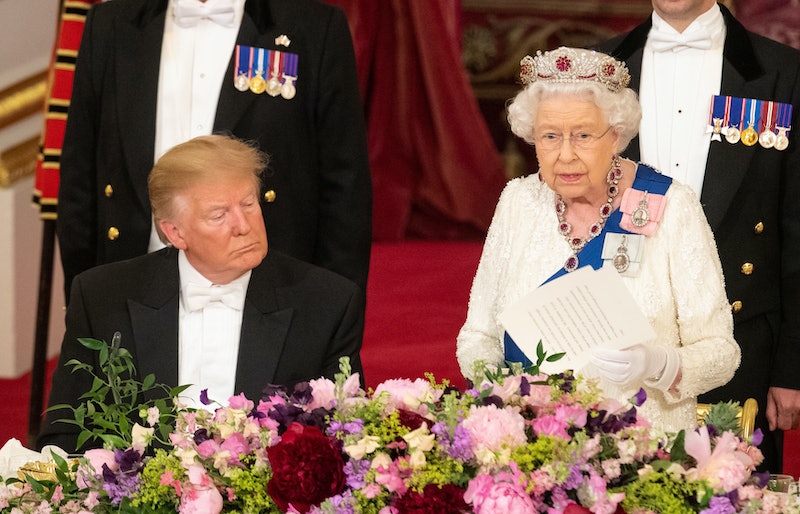 The royal women are known to give off subliminal messages with their outfits. And that is exactly why people on Twitter think that Queen Elizabeth II shaded President Trump with her latest style choice. President Trump is currently on a three-day state visit in Britain, landing in London on June 3. His first day consisted of meeting with the queen and spending time with the royal family. On June 3, the president had lunch with Queen Elizabeth II at Buckingham Palace, and followed the meal with tea with Prince Charles and his wife, Camilla, Duchess of Cornwall.

The day ended with a state banquet in his honor later in the evening at Buckingham Palace. It was at this banquet that Queen Elizabeth wore an outfit that had people talking. The queen wore a white lace ballgown, accented with white evening gloves. The outfit choice was quite tame, but her jewels might have held a secret message. For the special occasion, Queen Elizabeth chose her Burmese Ruby and Diamond Tiara, which she had commissioned in 1973.

According to Harper's Bazaar, jeweler Garrard revealed in a press release that the queen created the tiara using rubies gifted to her on her wedding day from the people of Burma. "The 96 rubies are a symbolic gesture, as rubies in Burmese culture protect from illness and evil, in this case to protect the wearer from the 96 diseases that can afflict humans," the release read.

Because of the rubies' special meaning, people on Twitter are wondering if the monarch chose the tiara on purpose to snub the American president. As one Twitter user pointed out, Queen Elizabeth has 41 tiaras to choose from in total, and on Monday she chose to wear her rarely worn Burmese Ruby tiara to greet President Trump.

It is estimated that the Queen wore the tiara last at the Indian state banquet in October 2009. On the other hand, the queen might have chosen the tiara to best represent Britain. According to Garrards, the tiara's jewels "are set in a series of rose motifs inspired by the Tudor Rose, the heraldic symbol of Britain."

The queen also wore Queen Victoria's Crown Ruby Earrings and Necklace, doubling up on her ruby choices. Then to complete the look, the monarch wore three diamond brooches with significant meaning. One of the brooches represented the Coldstream Guards, which is the oldest regiment in the British Army. One of the other badges also had a photo of her father, George V, wearing his military uniform.

Some people thought that wearing the badges and old jewels could also have been a possible snub. "She couldn't be more clearly declaring herself Monarch than if she'd dragged the crown jewels themselves out for the evening," one Twitter user commented.

People are reading into the monarch's outfit choice because the royal women are known to convey messages through their ensembles. For example in May 2017, when the monarch delivered her annual Queen Speech, Queen Elizabeth wore a blue hat with five yellow flowers decorated into a circle.

People believed this outfit underlined her support for the EU, especially since Queen Elizabeth was delivering Theresa May's Brexit plan in the speech.

Queen Elizabeth's choice of the Burmese Ruby tiara could have just been a coincidence, but we'll never know for sure.