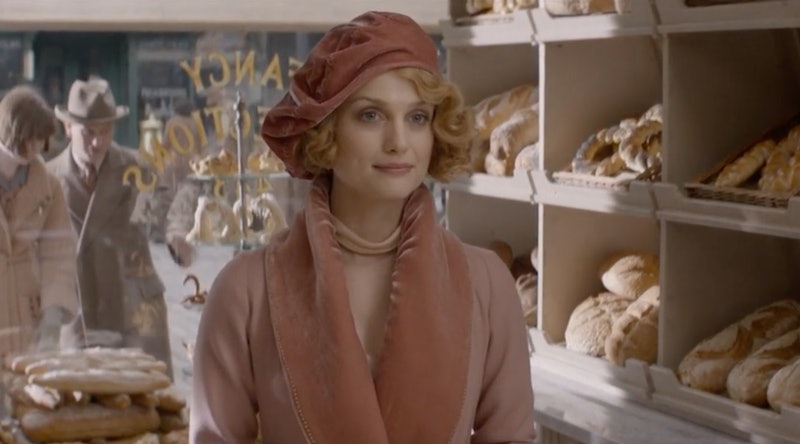 Major spoilers ahead. In the new Fantastic Beasts film, titled The Crimes of Grindelwald, the series returns to its Hogwarts roots with the inclusion of a young Albus Dumbledore (Jude Law). Dumbledore isn't the only addition to the cast whom Harry Potter fans are already familiar with, as a young Professor McGonagall and the legendary alchemist Nicholas Flamel also make appearances. Those familiar Harry Potter faces get mixed in with the new characters originally introduced in the first Fantastic Beasts movie from 2016. Most Fantastic Beasts characters, like Auror Tina Goldstein (Katherine Waterston), Newt Scamander (Eddie Redmayne), and Jacob Kowalski (Dan Fogler), don't face major personality shifts in the new Potterverse movie, but in The Crimes of Grindelwald, Queenie Goldstein changes a lot, and it's a disappointing turn of events.

Queenie Goldstein (Alison Sudol) is introduced early on in Fantastic Beasts and Where to Find Them as Tina's younger sister. Queenie is a Legilimens, which means that she can read people's minds as well as extract their feelings and memories. Queenie's storyline in 2016's Fantastic Beasts focused mainly on the American witch's flirty mannerisms which led her and Jacob to start a sweet new relationship. But Queenie wasn't just there to dazzle wizards with her unique mind-reading abilities. She played an instrumental part in freeing Newt and Tina from being held in custody by the American Ministry of Magic, called MACUSA.

First, Queenie approached the MACUSA employee who was planning to obliviate Jacob, and she blackmailed him with the information that he's cheating on his wife after reading his mind. Then, she took Jacob and prevented him from having his memory wiped out so he could help her. She didn't need much help though, as Queenie used her marginalized role as a woman in the 1920s to trick yet another MACUSA worker, by telling him that she's sick and that Newt's suitcase has "lady things" in order to get the suitcase past the official. Seeing Queenie, with her blond curls and pink jacket, use her femininity — and men's aversion to discussing it — in order to free Newt and Tina made the Legilimens one of the most exciting new characters of the Harry Potter prologue, especially for female fans. Queenie used the ways that men underestimated her to her advantage, and she indirectly saved the Muggles from the dark wizard, Gellert Grindelwald (Johnny Depp).

The new movie however, dismantles all of Queenie's empowered femininity that the first movie of the new series had built. Early on in the 2018 sequel, Queenie and Jacob show up at Newt's house in London. The no-maj (aka muggle) Jacob and Queenie had resumed their relationship that started in the first Fantastic Beasts, which relies on the flimsy explanation that Jacob's memory hadn't been obliviated because that spell couldn't work on good memories, which Jacob had due to his burgeoning love for Queenie. Without even worrying about this new loophole in the way that the "obliviate" spell works, the relationship between Queenie and Jacob poses other problems for the couple because in the U.S. no-majes and witches/wizards can't marry.

Queenie isn't re-introduced as the badass witch with special powers that the first movie had depicted, but rather as a marriage-obsessed, manipulative woman who had put a love spell on Jacob to convince him to get engaged. After Newt undoes the spell that Queenie had placed on her boyfriend, Jacob immediately reverses his desire to get married in fear that they would both get arrested if they did. This starts a fight, which frames Queenie as an unreasonable person who only wants to get married — a.k.a. a bad and prevalent stereotype of women. That's only where the demise of Queenie's portrayal in Fantastic Beasts 2 begins though, because after her fight with Jacob ends, she runs off to Paris to find Tina in a hysterical — yep, that loaded term — frenzy.

After Queenie flees to Paris, she goes to the French Ministry of Magic where Tina is supposed to be working. Whe woman at the desk reports that there are no records of Tina in their database — which the film never totally addresses, though that could have something to do with the fact that Grindelwald and his assistant, Vinda Rosier (Poppy Corby-Tuech) walk into the Ministry at that time. But more on that soon.

In a foreign country and without her sister, Queenie feels scared, which is a perfectly fine feeling to have. But the film portrays Queenie as a hopeless, vulnerable person as she walks through the streets of Paris in the rain, crying, and desperately searching for Tina. That vulnerability plays right into Grindelwald's confusing plot to recruit Queenie, because after Queenie finally gives up searching and droops down onto the sidewalk, Vinda approachs her and asks her if she needed a place to stay.

After blindly following Vinda, Queenie is confronted by Grindelwald at the apartment he claimed, and the next thing audiences see of her wis at Grindelwald's Nazi-like rally later in the movie. Queenie was on her way to the dark side, becoming a seemingly brainwashed follower of Grindelwald and his plan to start a war against the muggles.

What's most disappointing about Queenie's change in character is the way that it weakened one of the new series' few female characters. In general, one could argue that J.K. Rowling's second film series, Fantastic Beasts, missed a great opportunity for the series to finally focus on a heroine instead of a male hero. Harry Potter gave the world Hermione Granger, whom inspired so many young girls to embrace their braininess and brazenness, but the series still completely revolved around Harry Potter. But rather than dwelling on how great it would have been for Fantastic Beasts to make its protagonist either a person of color or a woman rather than Redmayne's Newt Scamander — because that ship sailed years ago — we're forced instead to inspect its ancillary female characters like Tina, Leta Lestrange (Zoë Kravitz), and Queenie.

Only two of the three female characters with substantial roles in Fnatastic Beasts: The Crimes of Grindelwald even make it out alive, and as heroic as Leta's death was — she sacrifices herself to stop Grindelwald from killing Newt and her boyfriend, Theseus (Callum Turner), his brother — Kravitz's character is killed off much too quickly given the amount of complexity that she adds to the story.

While Queenie survives, her character arc in this latest film relies on so many problematic stereotypes that some might think that death would have been a better fate. To see Queenie standing next to Grindelwald at the end of the film, as a person who was clearly manipulated to the point that she could betray the ones she loves (Jacob and Tina), was to see the Harry Potter franchise turn its back on women.

Never in the series has a woman in the Potterverse shown such weakness of character. At least in the Harry Potter series, the women that audiences were led to despise, like Dolores Umbridge (Imelda Staunton) and Bellatrix Lestrange (Helena Bonham Carter), still maintained a level of determination and autonomy that suggested these women, evil as they may be, had staunch values.

If you had asked me at age 12 if a future movie within the Harry Potter universe would show a woman crying in the rain because her boyfriend didn't want to get married and because she couldn't find her sister and felt lost, I would have laughed in your face. Now, at 25, I'm deeply disappointed in the way that Rowling seems to have forgotten all of her fans who turn to her work to feel inspired by magical female characters.