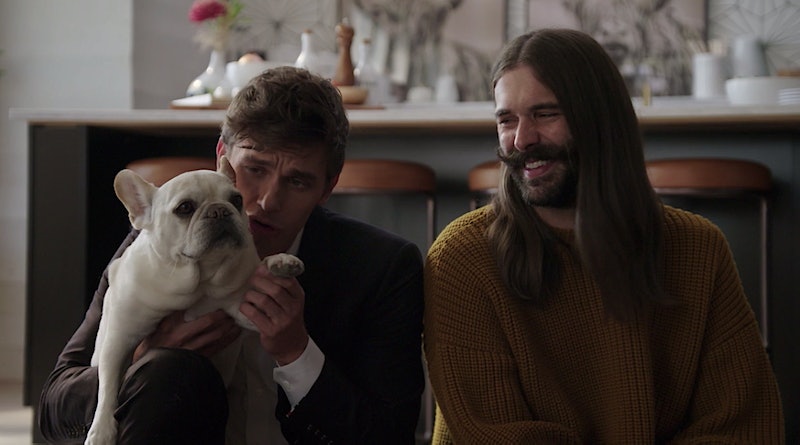 The third season of Queer Eye made its Netflix debut on Friday, March 15, which means many of you probably spent the majority of your weekend obsessing over the Fab Five's latest adventures. And while all of their featured subjects proved to be amazing individuals, there was one figure that stood out above the rest. Though he only made a few brief cameos, the Queer Eye French bulldog Bruley proved to be the breakout star of Season 3 and managed to steal the spotlight from all the others in whatever scene he was in.

Bruley first appeared in the very first episode and basically spent the majority of his time hanging out in the Fab Five loft, serving as a mascot of sorts to his fellow colleagues — made up of Antoni Porowski, Tan France, Karamo Brown, Bobby Berk, and Jonathan Van Ness — as they reconvened at the end of each episode to watch the fruits of their labor be put into action. As you can imagine, Bruley managed to steal the show every time he popped up on screen, whether he was simply chilling out in a chair or being fed some of Antoni's delicious food. It's impossible not to instantly fall head over heels in love with him. And the fact that he's now considered to be an unofficial member of the cast, making these guys the Fab Six, rather than Fab Five, his adorableness truly knows no bounds.

But just in case you need a little more convincing, yes, he does have his very own Instagram account, which he's extremely active on and includes some very tasteful promotional photos of his time on Queer Eye.

"Hey guys, that’s me on the TV as the official @queereye loft dog! Season 3 is streaming now on @netflix," Bruley wrote in the caption of the above photo along with the hashtag #fab6. But, of course, Bruley isn't the one who is actually in charge of this account. That privilege goes to his human mom, Michelle Silva, who serves as one of the producers on the show. Hence how Bruley came to be part of the loft scenes to begin with. He makes several appearances on her Instagram account as well.

And obviously she was a very proud mama of her good boy making his television debut, writing in one caption:

"Our secret is out! @queereye Season 3 is streaming worldwide, and i can finally say how proud i am of my boy @bruley — the official Queer Eye Loft dog! Check him out on every episode on @Netflix."

Basically, Bruley has proven to be the most precious pup to ever pup and he now needs his own spinoff show on Netflix, so if the streaming higher-ups could make this happen as soon as possible that would be great. If these photos are any indication, it's clear that the camera loves him and he is more than deserving of some additional screen time in the future.

The Fab Five are wonderful, but there's no denying their sixth newest member proved to be the ultimate highlight of the season. Let's hope Bruley makes even more cameos in future seasons, so he can continue making the Fab Five even more fabulous.