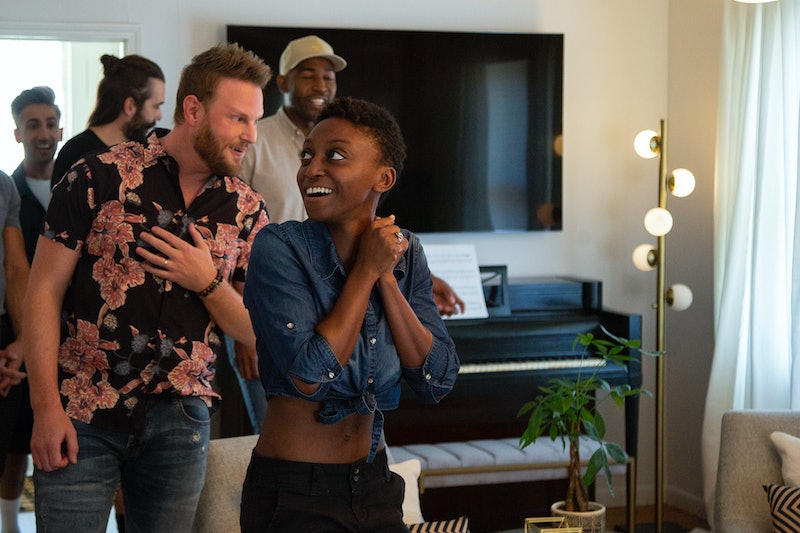 Things just keeping getting better for one Queer Eye Season 3 hero. After teaming up with the Fab 5, fans started a GoFundMe for Queer Eye's Jess Guilbeaux to help her go back to school, according to The Kansas City Star. On the show, Guilbeaux, who appeared in Queer Eye Season 3 Episode 5 "Black Girl Magic," talked about how she dropped out of the University of Kansas because of debt. Now fans are taking a page from Jonathan Van Ness, Tan France, Bobby Berk, Karamo Brown, and Antoni Porowski's book and helping raise the money for her to finish her education.

On March 16, a fan named Vanessa Gamet from Lawrence, Kansas started the "Send Jess Back To College!" GoFundMe to help this 23-year-old "strong, black lesbian woman" return to university to study computer science. In the episode, Guilbeaux explained that after coming out at the age of 16, her adoptive family disowned her and she's been on her own financially ever since. "Let's send this smart and strong woman back to college to complete what she began," Gamet wrote, "and give her the future she deserves."

On the GoFundMe page, Gamet made it clear that she doesn't know Guilbeaux personally, but "felt compelled to initiate this campaign" and has since handed over ownership of the account to Guilbeaux, something the Queer Eye hero confirmed on Twitter. "The person running this and I have been in contact," she wrote, "and it’s safe and will come to me."

Guilbeaux also expressed how much the fundraiser meant to her. "This is so sweet," she tweeted. "I have no words. I'm dehydrated at this point."

Following her appearance on Queer Eye, Guilbeaux took to Instagram to tell fans that "this experience was life changing for me. i learned how to love my natural curls, love my highly melanated skin, and all of what makes up who i am (a fierce gay kween™️)."

Guilbeaux, who, according to her Twitter, is now performing in a weekly drag show to the sounds of Janelle Monáe. And she even got a response form the singer herself, who tweeted, "@jesslayica you are my personal hero."

Guilbeaux told Entertainment Tonight that she "cried for 30 minutes straight, literally,” after seeing Monáe's reaction. "I can’t believe she knew I existed and was touched by me.”

She also told ET she's still in touch with "her five dads," and thinks about her experience on the show every day. "It goes into every single facet of my life now," she said. "Everything I learned from them — it’s the energy that I put into every action that I do.”

Her Queer Eye appearance also got her a Twitter mention from her favorite band Paramore. In the episode, Guilbeaux revealed she had a Paramore-inspired tattoo. "I love Paramore so much," she told Karamo, who's also a fan. "I used to get picked on because I listened to rock music." She explained that it made her question her identity as a queer black woman.

"Dear @jesslayica," the band wrote on March 19. "You’re gonna inspire so many with your story. It’s an honor that Paramore gets to be a small part of it. Thanks for putting up with the ones who didn’t get it and still listening anyway."

Paramore ended their tweet with a tempting offer. "Also, you and @Karamo @QueerEye need some vinyl? Or anything?" Here's to hoping Guilbeaux's Queer Eye appearance will not only help her go back to college, but give her a chance to meet her favorite band, too.

In just four days, the GoFundMe has managed to raise over $36,000 of the $100,000 goal, proving that, after watching the Fab Five work their magic, fans are looking to work a little magic of their own.