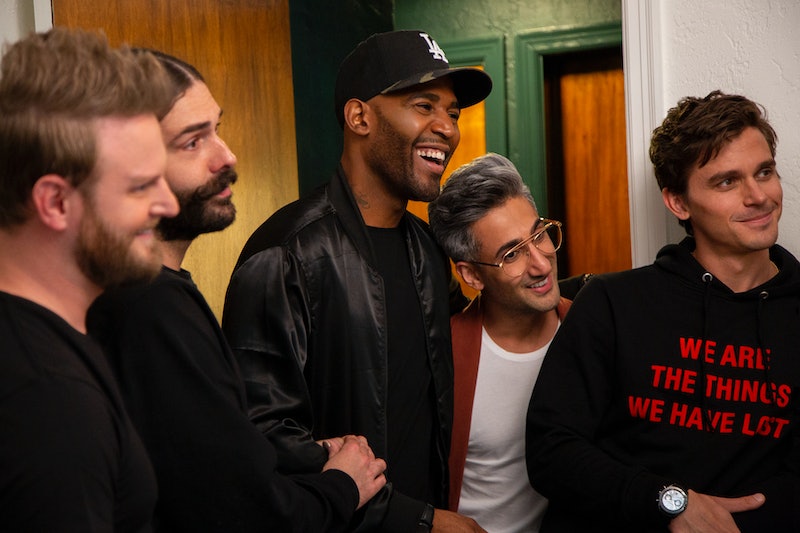 The world can be a dumpster fire, but, luckily, there are five charming, smart, well-dressed men ready to make it better. Queer Eye has been renewed for Season 6 at Netflix, the streaming service revealed on Wednesday, March 11. The beloved reality series hasn't even debuted its fifth season yet, and it's already guaranteed to come back for more goodness. And not only is the entire Fab Five returning, but they're heading to another new location, this time in the Lone Star state.

Production on Queer Eye Season 6 just started this week (March 9), according to a press release obtained by Bustle. Antoni Porowski, Bobby Berk, Jonathan Van Ness, Karamo Brown, and Tan France are currently doing their thing in the city of Austin. The Texas capital will serve as their home base as they "scour the prairie in a search for a whole new roster of heroes in need of a little TLC," per the press release.

No further details have been released about Season 6, but fans can rest easy in knowing that the Fab Five won't be disappearing anytime soon. That said, fans are still waiting to see Queer Eye Season 5. And, unfortunately, they'll have to wait a little bit longer to get their fix. Season 5, which was filmed in Philadelphia last year, is currently set to premiere sometime in the summer of 2020.

Antoni, Jonathan, Karamo, Tan, and Bobby first resurrected Queer Eye (inspired by the early 2000s Queer Eye) in 2018. They've been dedicated ever since in positively transforming the lives of those who need it. Queer Eye is more than just about makeovers, it's about teaching others self-love and confidence, all while giving them encouragement to live happy and fulfilling lives. And if that happens to make viewers sob uncontrollably while watching at home, so be it.

More like this
'Bling Empire: New York' Star Nam Laks Is The “Blair Waldorf Of Thailand”
By Alyssa Lapid
Blake Abbie Was In A 'Boys Over Flowers' Reboot Before 'Bling Empire: New York'
By Alyssa Lapid
Everything To Know About 'The Real Housewives Ultimate Girls Trip' Season 4
By Jake Viswanath
Andy Cohen Apologized To Larsa Pippen After A 'RHOM' Season 5 Reunion Dust-Up
By Brad Witter
Get Even More From Bustle — Sign Up For The Newsletter
From hair trends to relationship advice, our daily newsletter has everything you need to sound like a person who’s on TikTok, even if you aren’t.