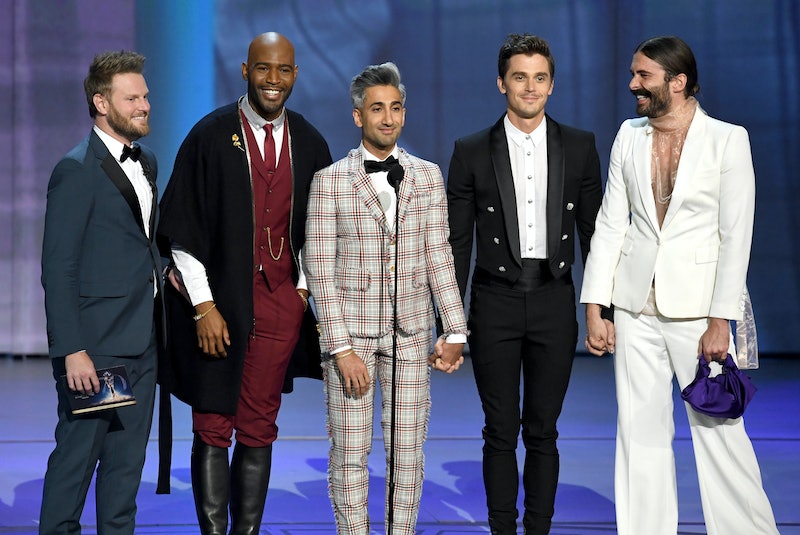 The Fab Five are heading to Japan. On Wednesday, Jan. 23, Netflix announced in a press release that Queer Eye is headed to Japan for a set of special episodes. The special four-episode installment, titled Queer Eye: We're in Japan!, will premiere on Netflix after Season 3 of the series drops later this year.

Production will soon start on the special, which will follow Antoni Porowski, Bobby Berk, Jonathan Van Ness, Karamo Brown, and Tan France as they head to Tokyo. The press release details that the Fab Five will be "working with local tastemakers to make-better a new group of heroes, while they learn and experience Japanese cuisine, fashion, design, grooming and culture firsthand."

“In just a year since we launched season one, Queer Eye has become a global phenomenon once again and the Fab Five are truly the ambassadors of self-care and compassion that the world needs now more than ever," Queer Eye creator and exec producer David Collins said in a statement. "Filming in Japan is a wonderful opportunity for us to work with four deserving heroes that will help showcase the incredible traditions and customs of their country."

The press release also stated that the four Japanese men and women chosen for the episodes "were selected from a wide group of applicants and nominations." And while in production in Japan, Netflix will invite a lucky fan to come meet the Fab Five via this Netflix Japan Twitter contest.

Queer Eye Season 3, which took the Fab Five to Kansas City, Missouri, will also be premiering in 2019. Last year, the cast filmed a special episode in the town of Yass, Australia, where they worked with George, a local farmer and helped a local pub as well.

"When Netflix first told us we were going to Yass we thought it was a joke — we didn't think there was a town called Yass, and we obviously like to say 'yass,'" Berk told the Australian publication 9Honey in an interview. "But it was really lovely. We have such an amazing, clever marketing department at Netflix that comes up with some really great ideas, and it was really nice to go to this little town, the middle of Australia you'd never expect to be so progressive and so open and so liberal and loving. And they were. It was a great experience."

And now, the series has another global adventure to add to its roster as the show and the cast heads to Japan for the special four-episode installment. The first two seasons of Queer Eye on Netflix were filmed in the state of Georgia and the Atlanta area, as the Fab Five aimed "to explore the unchartered territory of the south,” as Collins told Variety last year. Queer Eye filmed its third season in Kansas City and talked about how much they enjoyed the city at a Kansas City Public Library event in November 2018.

At the event, France said he enjoyed meeting all of the local people in the city, as reported by the Kansas City Star. “The people, and it’s not just the way you guys are with us. Like I see you smile at each other on the street and it’s beautiful," he told the audience at the event, according to the Kansas City Star. "You guys have got something special here, it’s lovely.”

And soon, the Fab Five will take viewers on their journey to Tokyo as well.