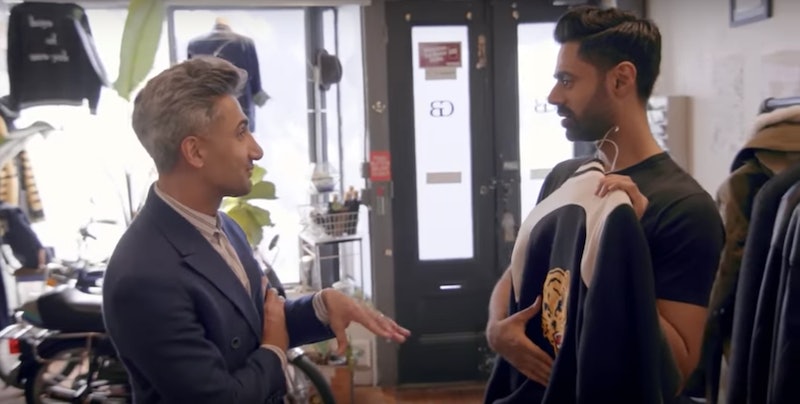 Everyone knows, when Tan France gives you fashion advice, you take it. Well, almost everyone. After going shopping with the Queer Eye guy for his new Netflix series Patriot Act with Hasan Minhaj, comedian Hasan Minhaj has yet to wear the amazing lewk Tan picked out for him. Don't worry, thanks to Twitter he knows just how unhappy fans are about this. So, where's the outfit Tan picked out for Minhaj? The host is finally ready to reveal what's going on, but fans might not like what he has to say.

In a new video, Minhaj admits that him not wearing the tiger bomber jacket Tan picked out for him is the "elephant in the room" when it comes to the assessment of his new show. Clearly, it's a jungle out there and everyone on Twitter wants to know why he's gone seven episodes without wearing THAT jacket. You know, the one he said looks like it's been "hit with Ed Hardy" when it's so obviously Balenciaga-y.

After reading so many tweets about the jacket, he swears that he will wear it on the show someday soon. "I'm not gonna let you down," he lets his very concerned and also very fashionable fans know.

But — and it's a pretty big but — there's actually a very serious reason why he hasn't worn the jacket yet. "Here's the thing though," Minhaj says looking straight into the camera. "I have to come clean with you." And after taking a huge breath, knowing what he was about to say wouldn't be easy he just blurted it out. "I lost the jacket."

Yes, Minahj already knows what you're thinking, how could he "lose such a special token of your friendship with Tan France?" Obviously, he didn't do it on purpose. No, no. In fact, he swears that he was wearing the jacket "everywhere 24/7" until that faithful day he just wanted to drink a cup of coffee.

"I was having a really hot cup of coffee and I said, 'Look there's no way I can spill coffee on this beautiful tiger bomber,'" he explains. "So I took it off and I guess I just didn't look for a second and now it's gone."

If that story sounds a bit suspect to you, well, it should. Minhaj ends this clip by trying to prove he's been looking for this jacket all along. He's looked under his couch, in the lost and found, the supply closet but clearly, he didn't lose it. Look close and you'll notice that everyone on his staff is wearing THE jacket. Now obviously, Tan (and everyone else) wants answers, let's just hope he starts returning his best friend's calls.

Perhaps, Minhaj will once again address the mystery of the tiger bomber when he returns to Netflix in 2019 with new episodes of Patriot Act. While he says he won't using his hands quite so much when speaking; another complaint from his viewers. He better think about replacing the tiger bomber before he returns, too, otherwise he'll never hear the end of it.