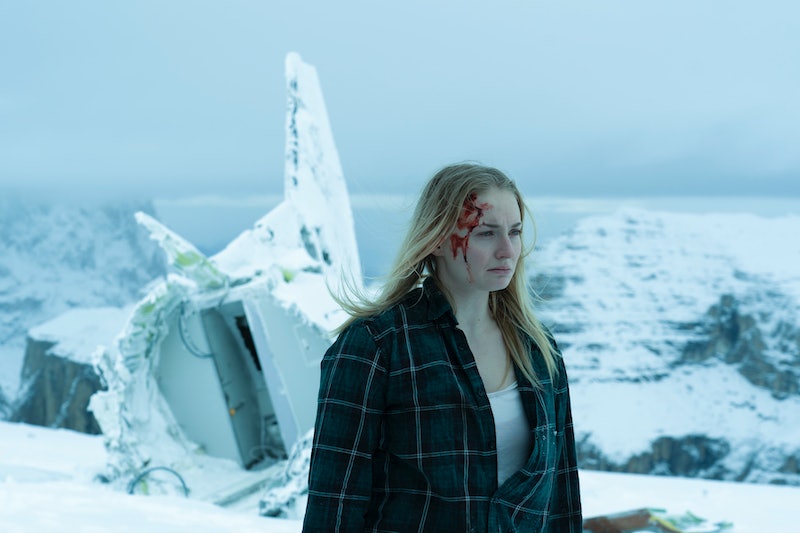 If you thought Sansa Stark had a difficult time in Westeros, that's nothing compared to what Sophie Turner's character, Jane, faces in Quibi's new Survive trailer. The footage for the new series finds the former Game of Thrones star stranded in the middle of nowhere and battling something much more powerful than fire-breathing dragons or ruthless Night Kings. In this story she'll be going up against the one and only Mother Nature, not to mention her own mental health.

Based on the novel by Alex Morel, Survive is set to hit the streaming platform on Monday, April 6, and will center around Turner's character Jane and Paul, played by Corey Hawkins. After a devastating plane crash leaves them as the only two remaining survivors at the top of a snow-covered mountain, Jane finds herself in the fight of her life against the cold and brutal wilderness and must learn to trust and depend on someone else for a change if she has any hope of making it out of this situation alive.

"No one's coming to get us," Paul is shown saying in the trailer. And while Jane may say that she's fine with that and be ready to give up, Paul refuses to accept defeat so quickly. "No, we're here together," he says. "I need to know you're not going to tap out on me." She assures him that she won't as long as he promises to do the same.

That may be easier said than done, though, given that a massive avalanche is shown making its way toward them. Not to mention that they're also seen climbing down a huge mountain without a safety net and facing off with some wolves — hopefully Turner can get in touch with her inner-Sansa for the latter, given her deep rooted history with direwolves. Either way, it'll be a miracle if they both manage to make it out of this thing in one piece.

This series will serve as Turner's first TV role since Game of Thrones, which came to an end in 2019 after an eight-series run. And Turner couldn't be more thrilled to portray yet another strong and complex character like Jane, who — much like Sansa — will continue to grow as an individual with each passing episode. “I couldn’t be more honored to portray the role of Jane in Survive for Quibi," Turner said in a statement in September, according to Variety. “She’s a complex character fighting against the odds to not only save her life, but to also find her own source of strength and courage.”

The Starks were always at their strongest in the snow. Let's hope that Jane proves to be just as resilient. Winter is coming.

More like this
Netflix Shut Down 'Bridgerton' S3 Rumours About A “Very Dark” Storyline
By Bustle
'The Queen’s Gambit' Season 2 Tweet Wasn’t From Anya Taylor-Joy
By Mary Kate McGrath, Jack Irvin and Grace Wehniainen
Everything To Know About 'Only Murders In The Building' Season 3
By Gretchen Smail and Kadin Burnett
Bill & Frank’s 'The Last Of Us' Episode Has Twitter Emotionally Wrecked
By Alyssa Lapid
Get Even More From Bustle — Sign Up For The Newsletter
From hair trends to relationship advice, our daily newsletter has everything you need to sound like a person who’s on TikTok, even if you aren’t.