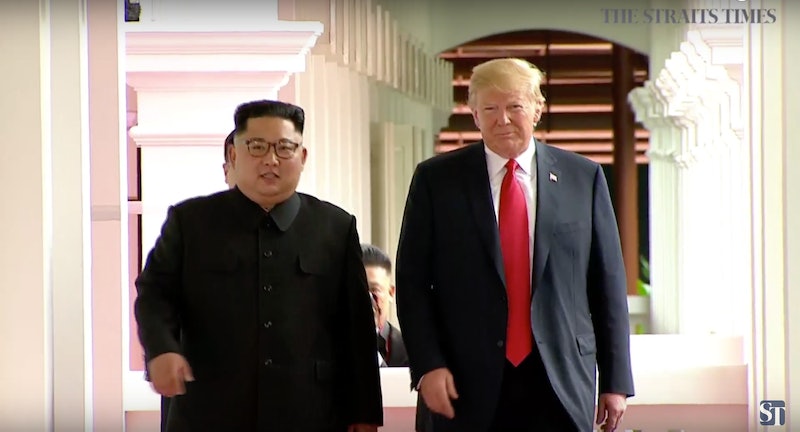 After a historical handshake between the president of the United States and the leader of North Korea, quotes from Trump and Kim Jong Un at the summit show that the unprecedented event is off to a friendly start. The two expressed hope that the summit would achieve what both nations wanted, according to CNN.

The president wished for the summit to be "tremendously successful," and while he was sitting next to Kim, Donald Trump said, "We will have a terrific relationship ahead." Kim had acknowledged there there were several "obstacles" to even making the summit happen, but, through translators, said, "We overcame all of them, and we are here today," CNN reported.

Cameras captured Trump and Kim walking toward one another on a red carpet as the summit started. Amid a backdrop of alternating American and North Korean flags, the two greeted each other. Kim smiled, and the president placed a hand on Kim's shoulder, according to CNN. The two began talking through interpreters and after posing for the press, headed inside to speak in a one-on-one session. CBS News reported that they spoke for about 45 minutes inside before coming back out to wave to the press and walk down another hall to a different section of Singapore's Capella Hotel for their second round of talks.

“I feel really great. Going to have a great reception," Trump said, according to Politico. "And tremendous success, going to be tremendously successful. And it is my honor and we will have a terrific relationship ahead.”

While walking to their second meeting location, a reporter asked Kim whether he would give up his nuclear arsenal. Kim did not answer. CNN reported Trump said he would work to resolve the conflict between the two nations on North Korea's nuclear program.

"Working together we’ll get it taken care of," Trump said, according to CNN, at the start of a meeting that was scheduled to end in a working lunch. He said the two of them would "solve a big problem, a big dilemma."

Kim also told President Trump that people around the world wouldn't believe what was happening in Singapore. "Many people in the world will think of this as a (inaudible) form of fantasy ... from a science fiction movie," Kim told Trump, through an interpreter, according to CNN.

A big chunk of the meetings between the leaders were held behind closed doors. This summit on Singapore's Sentosa Island is the first meeting ever between sitting leaders of the United States and North Korea, after more than 70 years of nuclear threats and international hostility. Throughout 2017, the two leaders hurled insults back and forth at each other, at times throwing around threats of nuclear strength, according to Foreign Policy.

Trump and Kim are expected to discuss North Korea's nuclear program, one that has grown in capability and reach over the past several years. The hope is that the summit will result in the hermit kingdom's complete denuclearization, while North Korea walks away with security guarantees in return, according to Politico.

Of course, the other country that has just as much at stake is South Korea. According to CNN, South Korean President Moon Jae-in said that the night before the summit was "a sleepless" one for him. Moon, who has been a long-time advocate of peace with his northern neighbor, expressed hope that the summit would be a success so that his country and the world could open a "new chapter."

"The North Korea-United States summit has just begun, and I believed all Koreans have their eyes fixed on Singapore," he said, according to CNN. For many around the world, Moon is regarded as the person who designed the diplomatic breakthrough with the communist nation.

After the day's meetings, President Trump is expected to make remarks to the media at 4 a.m. ET.