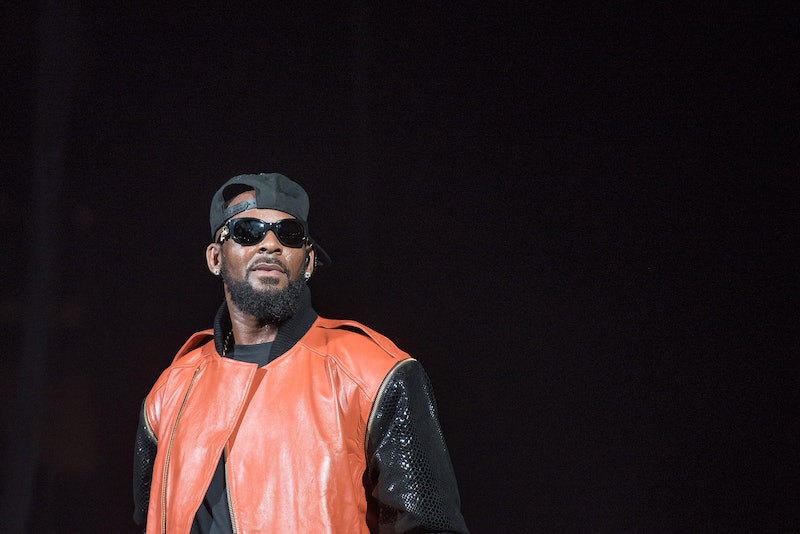 On Friday, prosecutors in Cook County, Illinois, charged R. Kelly with 10 counts of aggravated criminal sexual abuse, the Chicago Sun-Times reported. Citing court records and unnamed sources, the Sun-Times reported that Kelly's first court date is March 8, and that Cook County prosecutors would sign off on an arrest warrant for Kelly on Friday afternoon, in the presence of a judge.

Bustle has reached out to the Cook County State’s Attorney’s office and Kelly’s lawyer for comment. Kelly's lawyer, Steven Greenberg, reportedly told the Sun-Times that he had not been informed that Kelly had been charged. Last month, Greenberg told the Associated Press that Kelly denied all of the sexual misconduct allegations against him.

“The allegations aren’t true because he never knowingly had sex with an underage woman, he never forced anyone to do anything, he never held anyone captive, he never abused anyone,” Greenberg told the AP.

"To R. Kelly, I am sending this message: You have nowhere to run and nowhere to hide," Allred said during the press conference, according to the Chicago Tribune. "You have been able to get away with your predatory misconduct for far too long."

ABC and ABC 7 Chicago reported on Friday that the sexual abuse charges against Kelly involved four minors, between the ages of 13 and 16. The Sun-Times reported that the alleged crimes took place between 1998 and 2010.

The charges against Kelly also follow closely on the heels of a video sent to the Cook County State's Attorney's office by high-profile lawyer Michael Avenatti. According to the Chicago Tribune, Avenatti sent a video to Cook County prosecutors last Thursday allegedly showing Kelly having sex with a 14-year-old girl.

"The day of reckoning for R Kelly has arrived," Avenatti tweeted on Friday.

Greenberg, Kelly's attorney, subsequently told the Tribune that he doesn't "think there’s a tape of him acting inappropriately with an underaged woman." According to the Sun-Times, it is not yet clear whether the charges against Kelly were in any way related to the video Avenatti provided.

The Tribune's Jason Meisner reported that Kelly planned to turn himself in to Cook County authorities, and would appear for a bond hearing on Saturday. During a Friday afternoon press conference, a spokeswoman for the state's attorney's office confirmed this, noting that Kelly is slated to appear in bond court early Saturday afternoon.

Foxx confirmed during the press conference that Kelly was indicted on 10 counts of aggravated criminal sexual abuse involving four victims. According to Foxx, nine of those counts pertained to a victim being under the age of 17, and Kelly being more than five years older at the time of the incident. One of the counts was "based on the transmission of semen by Robert Kelly upon any part of the body of the victim for the purpose of sexual gratification during the course of the underlying forcible felony of Attempt Criminal Sexual Assault," Foxx said.

Aggravated criminal sexual abuse is a Class 2 Felony under Illinois criminal law, Foxx noted, and each count could earn Kelly between three to seven years in prison. Each count is also probationable, Foxx said. Foxx did not take any questions following her statement.

In a statement emailed to Bustle on Friday, the Rape, Abuse & Incest National Network (RAINN) highlighted the experiences of sexual assault survivors during the lengthy ordeal prior to Kelly being charged.

"We're glad to see the allegations against R. Kelly are being taken seriously and hope that these charges empower victims to come forward," RAINN's statement read. "The survivors who shared their stories showed admirable courage and strength."