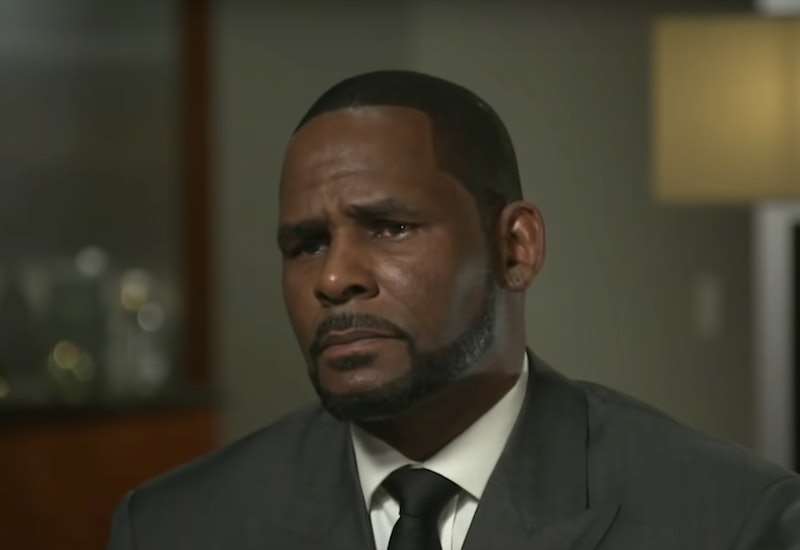 As the world gears up for the full release of CBS' highly-anticipated conversation with R. Kelly on Friday, previews of the rapper discussing his ongoing legal battle have slowly been released. The "Ignition" singer is currently in jail for failing to pay child support, though the interview took place before he was ordered back to jail. In the latest video released by CBS, R. Kelly told Gayle King why his child support payments were overdue.

According to Kelly, it's because people have been taking funds from his bank account. "So many people have been stealing my money," the rapper told King in an excerpt released Thursday. "People was connected to my account." Kelly did not explain exactly who he was talking about.

The rapper said he didn't keep personal track of his finances, and added, "A lot of it's on me." He went to a Bank of America alone to check up on his account for the first time about a month ago, he said, and was surprised to find just $350,000. He currently owes $161,663 in child support, and he insists that his failure to pay is not because of settlements he's paid to women who accused him of abuse (allegations that he denies).

The rapper said that a bank teller had been the one to inform him that people were taking significant amounts of money from his account. Kelly explained that he'd made an inquiry with the bank "because [he] was so tired of not knowing where [his] money was."

Kelly's attorney, Steve Greenberg, seemed to offer a somewhat different explanation for the rapper's financial situation last month. "Through mismanagement, through hangers-on, and bad contracts, and bad deals, and bad leases like he had in his studio, he really doesn't have any money at this point," he told the press. "I don't even think he owns the rights to 'I Believe I Can Fly.'" Greenberg added: "This is someone who should be wealthy at this stage of his career."

Multiple investigations across the country have been launched into sex crime allegations against R. Kelly. Over the years, many women have accused the rapper of coercing them into sexual relationships while they were underage. He's also been accused of making child pornography and of keeping women and girls in a sex "cult" against their will. Kelly, who is 52 years old, denies allegations of sexual abuse and says that he's never held anyone in his home against their will.

On Feb. 22, Kelly was arrested and charged with aggravated criminal sexual abuse on 10 counts. Three of the alleged victims are minors between the ages of 13 and 17. Days later, the rapper was released on bail (paid for by an apparent friend of his), but he was arrested again on Wednesday because of the overdue child support payments.