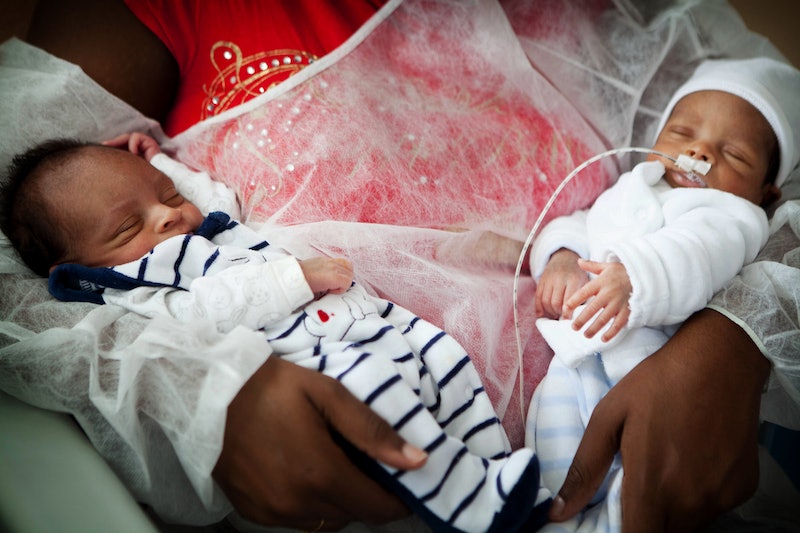 The United States has one of, if not the worst, maternal mortality rate in the developed world. In fact, while global maternal death rates have dropped by more than a third from 2000 to 2015, the rate in the United States has more than doubled since 1987. According to the Center for Disease Control and Prevention (CDC), about 700 women in the United States die each year as a result of complications related to pregnancy or childbirth. But buried in state and national data related to maternal mortality rates is an even more worrisome trend: Black women bear the greatest risk of maternal death.

"This issue is quite serious," Marsha Jones, executive director of the Afiya Center, a North Texas-based reproductive justice organization founded and directed by women of color, tells Bustle. "No women should be dying. However, they are. In this state and in many others, black women are carrying a disproportionate burden and this is unacceptable."

In 1987, the center recorded a ratio of 7.2 deaths per 100,000 live births. In 2013, the last year of available data, the ratio was a staggering 17.3 deaths per 100,000 live births. Moreover, an analysis put out in January found that nearly 60 percent of those deaths could have been prevented, meaning there's a terribly huge problem with the state of maternal health in the United States.

Although just 11.4 percent of births in Texas were to black women, they accounted for 28.8 percent of all maternal deaths.

In analyzing data from the CDC in 2016, the American College of Obstetricians and Gynecologists found that after 2010, "the reported maternal mortality rate for Texas doubled within a 2-year period to levels not seen in other U.S. states." Another 2016 study by the Texas Maternal Mortality and Morbidity Task Force and the Texas Department of State Health Services found that black women bore the greatest risk for maternal death in Texas in 2011 and 2012.

"When I was pregnant, I never would have known that, strictly because of my race, I was three times more likely to die," Texas state Rep. Shawn Thierry, who nearly died while giving birth to her daughter, tells Bustle. "I always say, I don't know if I'd have wanted to know because that statistic alone is stressful enough to endanger a pregnancy."

When contractions didn't follow soon after Rep. Thierry's water broke, her doctor agreed a Caesarean section would be her best option. However, before the procedure even began, Thierry began to suffer complications from the epidural which could have caused cardiac arrest.

"I started within minutes feeling like my heart was going to beat out of my chest," Thierry says. "I'd never felt anything like that. At some point I told them, 'I'm not going to make it. I'm not going to live through this.'" Thierry had to be placed under general anesthesia while her medical team worked to save her and her baby.

Thierry, who represents parts of Houston in Texas' House of Representatives, and her daughter both thankfully survived. And the experience has given Thierry a unique perspective in tackling the racial discrepancies being found in Texas' maternal mortality rate.

But why is there such a big racial disparity in the first place? Why are black women more likely to die from pregnancy-related causes than any other racial group? Like many health-related issues, the answer isn't simple and there's no one single contributing factor at fault.

According to research from both the CDC and the Texas Maternal Mortality and Morbidity Task Force, the most common causes of maternal death in all women are cardiac events, drug overdoses, hypertension, eclampsia, and hemorrhaging.

"Overall, the number of maternal deaths has gone up as we've seen an increase in chronic health conditions that can lead to or exacerbate many of those causes of death," Chris Van Deusen, a spokesman for the Texas Department of State Health Services, tells Bustle. He pointed to the increased rate of pre-pregnancy obesity, high blood pressure, and diabetes. "We know that African-Americans have higher rates of those chronic diseases and so suffer the complications of them at a higher rate."

"It is a direct result of how black women are received when they enter the health care system that is riddled with bias about black women's bodies."

As an example, Gay points to California, a state that has recently taken significant action to bring down its maternal mortality rate. While the U.S. maternal mortality rate has risen, California has seen its rate drop by 55 percent from 2006 to 2013, according to data from California's Department of Public Health. But as Gay points out, even though the state has managed to improve maternal health outcomes for women overall, racial disparities still remain.

While rate of maternal mortality among African American women in California has declined overall, it still remains three to four times higher than the rate for other racial and ethnic groups, an analysis of California's maternal mortality data conducted by Ob.Gyn.News showed. "One of the things this brings to mind is that there is still a racial component here that hasn’t been addressed," Gay says. "Because otherwise we would see that gap narrowing as maternal health is improving, but we don't."

As a woman who nearly became a maternal mortality statistic, Rep. Thierry says she often wonders how a woman with her same skin color, who may not have the same quality of health insurance or who may not know how to advocate for themselves to the extent she had to, would fare in a childbirth situation similar to hers. Would they be alive today? Or would their concerns and symptoms have gone unheard, unaddressed, and untreated?

"If we see discrimination in every other industry, how can we say it doesn't exist in the health care industry?" Rep. Thierry says. "We see it in the banking industry... in the criminal justice system. Now, unfortunately, we're seeing it in maternal care."

Gay also notes that many women often enter the health care system through their reproductive care provider or nonprofit health organizations like Planned Parenthood. "For a lot of women, sometimes, the OBGYN, nurse midwife, or whoever they're seeing for reproductive health care is the only provider they'll see that year," Gay says. "So when you cut those kinds of services — services that are basically entries into the health care system —what can you expect but to see an impact in maternal health outcomes?"

Advocates are working to bring down maternal mortality rates and eliminate the shocking racial disparities seen in the data. In Texas, Rep. Thierry has been working to address the issue of black women's risk of maternal mortality at both the state and local level. At the Texas State Capitol, she's introduced and fought for legislation to extend the life of the Texas Maternal Mortality and Morbidity Task Force and direct them to dig into socioeconomic data related to incidents of maternal mortality. Locally, in Houston, she's helped create a steering committee to look into how to address the issue within her district. "All these conversations, I believe, are helping," Thierry says. "We're going to save lives."

But major cultural shifts will likely be needed before we start seeing the gap between black women's maternal mortality rate and those of other racial groups narrow. "When race stops being the precursor to how people will be received into the health care and other systems, the outcomes will be different," Jones says, adding that efforts to address the issue need to center around black women. "If we would lean on the voices, experiences, traditions, leadership, and ingenuity of black women to create solutions and strategies, we would begin to successfully address this issue."

More like this
10 Organizations To Support On Latinx Women's Equal Pay Day
By Caroline Burke and Mia Mercado
MOBO Awards Found Kanya King On The Woman Whose Grit & Determination Spur Her On
By Kanya King
Dyson Is Dropping Futuristic, Air-Purifying Headphones
By Rachel Lapidos
Meet The Rugby World Cup Breakout Star Making The Sport More Inclusive
By Shahed Ezaydi
Get Even More From Bustle — Sign Up For The Newsletter