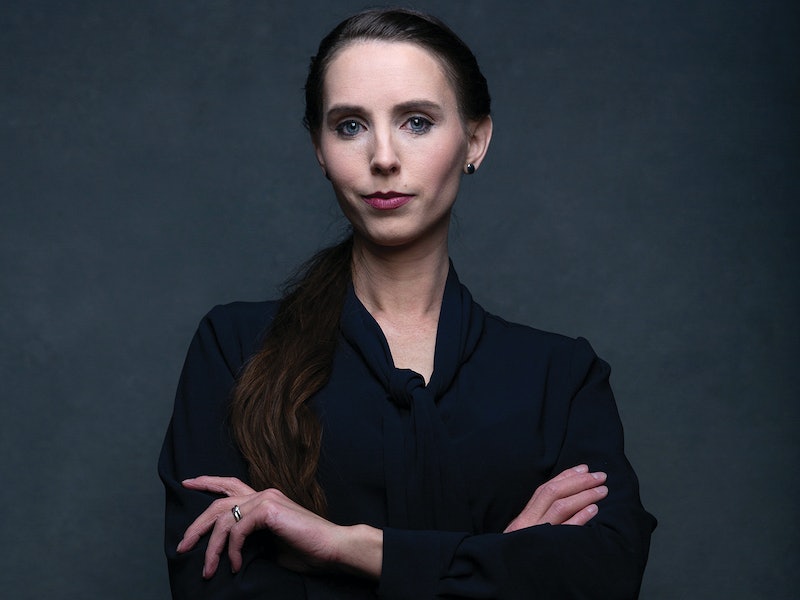 Rachael Denhollander, Jennifer Michelle Greenberg, and Mary DeMuth have a lot in common. They’re wives and mothers. They’re Christians. They’re survivors of childhood sexual abuse. And they all have books releasing within a month of each other — all missives toward a safer someday.

Denhollander sits sequestered in an undisclosed building in Chicago when we speak. She serves as a fiduciary representing her fellow survivors in a case against USA Gymnastics. I’ve just finished her memoir, What Is A Girl Worth?, in which she writes about becoming the first woman to speak publicly about her childhood sexual abuse perpetrated by former USA Gymnastics (USAG) team doctor Larry Nassar, who was convicted of receiving child pornography, possession of child pornography, tampering with evidence, and ten counts of first-degree criminal sexual conduct in 2017. (In the book, she also alleges that she was sexually assaulted by a college student at her church when she was just seven years old.)

During a break in mediation for the case against USAG, Denhollander talks to me about her books — the memoir, as well as a children’s book, How Much Is A Little Girl Worth?, which began as a poem to her three daughters and to every vulnerable child who has been exploited and abused.

"I think that really is the core question that all of us have to answer when we’re making decisions about what we do, and how we treat people, and the actions that we take that will impact others," Denhollander says. "'How much is this person worth?' Because the identity and the value of the object determines what you can do with it."

Denhollander’s words — the value of the object determines what you can do with it — echo in my mind as I read Jennifer Michelle Greenberg’s Not Forsaken. The book begins with a deluge of gut-wrenching stories from Greenberg’s childhood. Her father, she writes, molested her, put violent pornography on her computer, exposed himself to her, and made sexual comments to and about her. She also shares that he beat her black-and-blue, threw her into walls, and lobbed dishes at her head between church services and hours spent reading theology books in his recliner.

The reader encounters these visceral, traumatic memories at the very beginning of Not Forsaken.

"The first reason for that was to set up who I am, and to kind of give me credibility," Greenberg tells me when we meet for coffee. "The second reason was because I wanted survivors who might be triggered by stories like that to just be able to skip that whole first chapter."

Much like in my conversation with Denhollander, I realize before my latte has cooled that Greenberg’s compassion for her fellow survivors serves as a primary factor in her decision-making. She sees God as having been her safe place when her father and home were anything but. And now, she’s dedicated to helping the church become more like God and less like her father.

Mary DeMuth knows something about fathers who are anything but safe, too. Her father exposed her to pornography and conditioned her to believe that nudity was normal. The abuse didn’t just occur at home, though. Neighbor boys repeatedly raped DeMuth as a little girl. She told her babysitter what the boys were doing to her, but the next time the boys came to "play," the babysitter pushed DeMuth out the door to join them.

DeMuth has written 39 books, including a fictional trilogy featuring an abusive father character, a volume on parenting, and her latest, We Too, about how the Christian church can respond to sexual assault crises. This is the book that DeMuth tells me she "was meant to write." Its pages brim with expertise: DeMuth knows the world of abuse in a tragically intimate way, and she has been advocating for preventative and responsive care for abuse survivors since the 1990s, long before #MeToo or #ChurchToo — which chronicles sexual harassment and assault in churches and Christian settings — ever trended on Twitter.

The emergence of #MeToo and #ChurchToo sent DeMuth into a year of “getting grieved and re-grieved at how the church was responding, whether the church was within the church or without the church. “I knew," DeMuth tells me, "that somehow, over the many, many years of healing, I had still remained in the church, and I could offer something to those who were struggling."

While Denhollander, Greenberg, and DeMuth all speak of tremendous healing that’s occurred in their lives, they also admit parts of these books were very hard to write. Revisiting traumatic memories, the vulnerability of talking about one’s body being violated, describing bouts of depression and overwhelming anger — these are the raw parts of us that many survivors struggle to stammer out to a best friend or therapist. Denhollander experienced rapid weight loss and nightmares from the anxiety of telling her story publicly. Greenberg battled suicidal thoughts. DeMuth struggled to think of sex as good. It’s all right there in their books — never salacious, but still, there it is, hearts and lives and humiliation right there in print for the world to read.

These authors do not shy away from words that we tend to whisper in public — rape, molestation, assault — nor do they linger in the graphic details a second longer than it takes to make this point: Sexual abuse is horrific, and it shouldn't be discussed in vague terms. Time’s up.

She and her fellow authors have lost friends because they chose to tell their stories. And then there’s the fact that their children could Google their names and discover it all. Denhollander’s children could watch footage of her using her hand to depict the “sweeping motion” of Nassar’s penetration as part of her court testimony. Greenberg’s and DeMuth’s children could find their mothers writing about their abusive grandfathers.

The stories are different, but the question is the same — why share so publicly? The answer is the same, too: Because Denhollander, Greenberg, and DeMuth know they’re not the only ones, and they’re committed to doing whatever they can to come alongside other survivors as they grieve, heal, and seek justice. If books can show survivors they’re not alone, and teach the rest of us how to create environments where survivors are safe and abusers are not, then there’s no question at all, is there?

"I hear a lot of 'that’s a Democrat issue' or 'that's a Republican issue.' Can’t it be a people issue?"

Denhollander, Greenberg, and DeMuth’s books stand on shelves next to titles like Healing Together by survivor and advocate Anne Marie Miller and Becoming a Church that Cares Well for the Abused, a compilation of lessons for pastors and ministry leaders, including contributions by Denhollander. Greenberg’s father simultaneously claimed Christ as his savior and threatened to shoot his daughter when she became engaged to a Christian man. Denhollander was molested by a man at church years before she ever met Larry Nassar. DeMuth has endured countless criticisms from Christians who simply don’t want to talk about abuse. And yet, these survivor-authors stay in the church, and write to the church, because they believe it can become a place that stands for what is right rather than the appearance of rightness.

Greenberg says that she’s recently advised a survivor on how to tell his wife that he’d been abused by his father. DeMuth is in the midst of "helping [some survivors] navigate the crazy maze that is the church response" Denhollander describes some of the policy work she’s a part of, then says, "I hear a lot of 'that’s a Democrat issue' or 'that's a Republican issue.' Can’t it be a people issue?"

Their advocacy happens on the phone, in Twitter DMs, in front of judges. And it happens on the page. In WeToo, DeMuth describes how churches have responded to abuse in the past, what she’s seeing from churches now, and imagines a better way forward. She calls pastors to invite stories of abuse to be shared from the pulpit. She asks pastors to listen to survivors and "avoid prescribing a healing journey." And she advocates for child protection policies that are frequently revisited, revised, and reviewed with staff.

Greenberg explains a concept she calls "boundaried forgiveness" — "when we let go of our anger, resentment, and desire for revenge; yet we may maintain boundaries and pursue justice." For Christian survivors who have been taught something the Bible doesn’t actually say — that to forgive is to throw justice out with the trash — Greenberg’s definition offers tremendous freedom.

Denhollander returns to the theme of justice and righteousness throughout What Is A Girl Worth? "Consider this your invitation to join in that work," she writes. "To do what is right, no matter the cost. To hold to the straight line in the midst of the battle."

And maybe that’s what What Is A Girl Worth?, Not Forsaken, and WeToo are as well — books that remind readers how much right we can do in a world full of wrong.

What Is A Girl Worth? by Rachael Denhollander, Not Forsaken by Jennifer Michelle Greenberg, and We Too by Mary DeMuth are all available now.