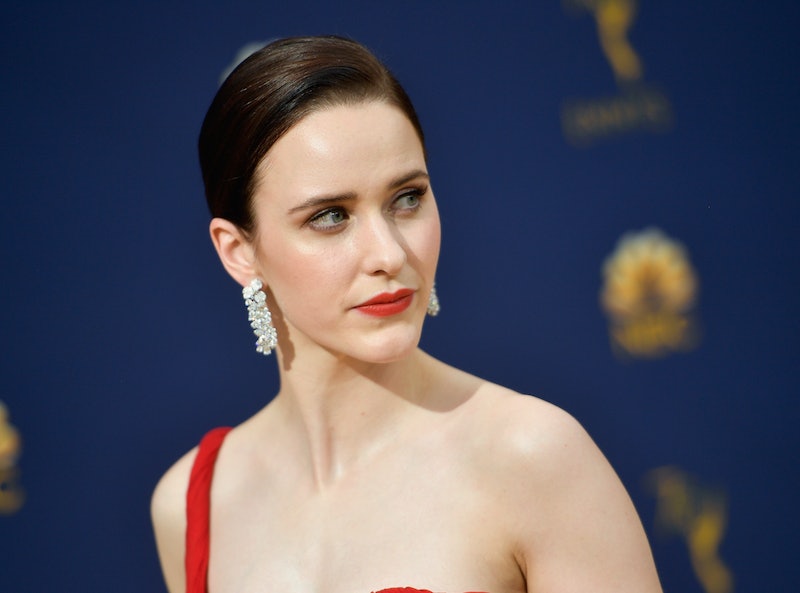 Wardrobe malfunctions happen all the time on the red carpet, where the intricately made dresses sometimes rip, zippers get stuck, or a nipple pops out — and the actors always take it all in stride. But Rachel Brosnahan had a malfunction of a different kind, where Brosnahan's diamond ring got stuck on her finger, making her go through a fashion snag that is relatable as all hell. How many times have you tried on a ring that cost just a little bit too much — or belonged to an engaged friend — only to find that your fingers magically turned into swollen sausages, and you couldn't slip it off as easily as you put it on?

Whether you're at a department store and the clerk is staring at you unblinkingly (as if you will disappear with the goods,) or your engaged friend is smiling painfully as you yank on their brand new band, getting a pricey rock stuck on your hand is a stressful time. Something that Brosnahan got to experience firsthand, just on the red carpet and surrounded by heavy-hitting A-listers.

The jewelry was from Tiffany & Co.’s new ‘Paper Flowers’ collection, meaning they weren't a bargain-borrow. While she was rushing to get dressed before the awards show, she tried on an extra diamond ring and found it stuck on her finger. It wouldn't budge.

“And then you know when you start pulling on something, it just gets swollen,” she told Variety. “So I was on the red carpet minorly panicking about this ring that was very stuck on my finger.”

The image of the actress fiddling with her ring in between photos and interview sessions is just too relatable. But while it might have sounded like the whole ordeal was pretty chill, there was a whole lot more panicking involved than that.

Her stylist, Jill Lincoln, recalled to Hollywood Reporter how it wasn't just the ring debacle that tripped them up during getting dressed, but her clutch also exploded moments before leaving the hotel room.

"It was a smooth-sailing kind of a day, which is a rarity in our field, up until the last few minutes when Rachel got an extra ring stuck on her pointer finger and her Judith Leiber clutch broke, it just exploded," Lincoln explained. "We were scrambling, trying to ice her finger to get the ring off and wondering if we should try to cut it off. She was losing blood circulation in her hand, just as she was getting butterflies, so it was the perfect storm of ‘Why?!' We didn’t ever get the ring off; it’s still on, as far as I know."

They literally considered cutting it off, which, same. Every time that happens in a mall, there is that flash of a moment where you wonder if you should just take the pliers out. So how did the Marvelous Mrs. Maisel finally get it off?

Apparently, YouTube came to the rescue. According to Variety, she found a video that combined olive oil and dental floss, and the sucker came right off. Remember that for the next time you're in the same jam.