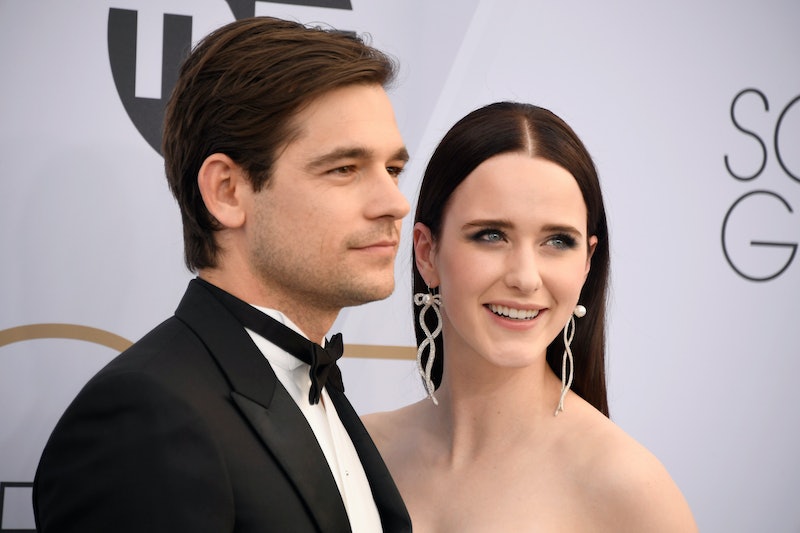 This Hollywood couple has been together for quite a long time. On Sunday, Rachel Brosnahan revealed she's been married to Jason Ralph for way longer than anyone thought, according to People. The Marvelous Mrs. Maisel star opened up about her marriage at the 2019 SAG Awards, noting that certain stories about her wedding date were incorrect. Brosnahan said that contrary to reports that the two actors had recently tied the knot, their wedding was old news and that they've actually been married for years.

In the past, they've kept details about the relationship largely private, but rumors that Brosnahan and Ralph were married began in September, as reported by People. The two stars were spotted wearing wedding bands at the 2018 Emmy Awards on Sept. 17. Since Brosnahan and Ralph are longtime partners, it's not all that surprising to now know that they've been married a while.

“We’ve been married for years and been together for even longer,” Brosnahan told People. “We had a good laugh when the news came out that we had just got married, like ‘Happy six-month anniversary, honey!’"

At the ceremony, Brosnahan took home the SAG award for Best Actor in a Comedy Series for The Marvelous Mrs. Maisel, and shared a kiss with her husband before going up to accept the award, as per People.

Given how long these two have been together, the update on their union makes sense. Brosnahan and Ralph were first linked in 2015, and presumably met on the set of the WGN show Manhattan, which began filming in 2014, according to PopSugar. Specific details of their meeting still remain private.

The spotlight on the relationship is definitely more recent, as Brosnahan's breakout role in The Marvelous Mrs. Maisel has resulted in an eventful couple of years. Brosnahan won the Emmy for Best Comedy Actress in 2018, according to The Hollywood Reporter. Earlier this month, she won the Golden Globe for Best Actress at the 2019 Golden Globes, making her the only woman to win in the category twice other than Tina Fey, according to E! News.

According to People, Brosnahan thanked Ralph in her Golden Globes speech, saying, “Jason, I love you. I wouldn’t be here at all without you. Thank you.”

Ralph is an established actor as well and best known for playing Quentin Coldwater on the Syfy series The Magicians. He also had a recurring role on the most recent season of TVLand's Younger. The two have openly supported each other's careers over the years. Ralph appeared at Brosnahan's side throughout award season, and he's also shared the occasional joke about their relationship on social media. In 2017, Ralph posted a picture of a Marvelous Mrs. Maisel subway ad on Instagram and wrote, "I know her!"

The pair did not reveal their real wedding date at the SAG Awards, but Brosnahan made it clear they've been married longer than some reports suggest. These two seem to be in it for the long haul, and while they're understandably private about their romance, fans can at least look forward to seeing them walk red carpets together in the future.