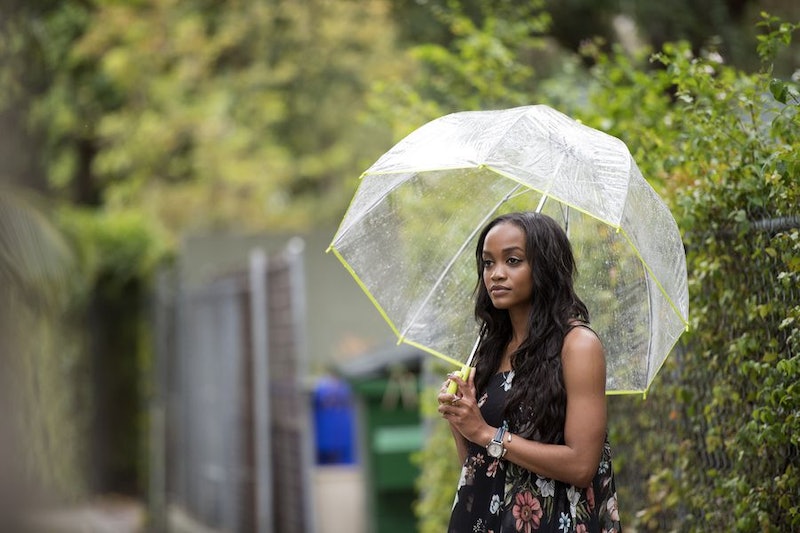 Now that there are only a few episodes of The Bachelorette remaining this season, it's almost time for Rachel Lindsay to decide who she wants to spend the rest of her life with: Peter, Bryan, or Eric. And in a new promo for Monday night's episode, the guys are already starting to get super competitive... but it seems like there's already one clear front runner, and it's the same guy who's been leading the pack all along. In the promo, Rachel and Bryan are wearing their matching watches, and since she doesn't have anything else like that with any of the other guys, it seems like yet another clear indicator that he could be the one she chooses.

In the clip, Rachel's hanging out in a room with all three men, and they notice Bryan's wearing the watch that Rachel bought him... and that Rachel herself is wearing her matching watch, too. And even though Eric and Peter fawn over it and talk about what a nice watch it is, what they have to say after he leaves the room is a bit different. Peter's annoyed by it, and even goes so far as to call people from Miami "fake," while Eric tries to keep a fair middle ground, because he is nothing if not tactful.

They're basically like friendship bracelets, but more romantic... and a lot more expensive than just making them with your BFF at camp. But are these watches really that big of a deal?

Bryan's obviously wearing his watch because why wouldn't he wear something the woman he has feelings for bought for him on national television? Rachel could be wearing hers out of respect for what she has with Bryan, and like Eric said, it would make a way bigger statement if she wasn't wearing it.

Or, you know, there's the possibility that Rachel is wearing the watch because she and Bryan are going to get engaged at the end of all of this. That seems pretty likely, since Bryan's still wearing the watch in his current Instagram photos, leading fans to believe that he and Rachel are engaged right now.

There's no way of knowing for sure if Bryan wins or not until the finale airs in a few weeks, but with the evidence we have right now, his chances are definitely looking good.

More like this
'Bachelor' Fans Think Rachel & Clayton Are Dating After This TikTok
By Grace Wehniainen
Kaitlyn Bristowe Said Chris Harrison Ignored Her After Her 'Bachelorette' Hosting Gig
By Grace Wehniainen
Zach Addressed His "Boring Bachelor Energy" After His Group Date With Latto
By Grace Wehniainen
All The Clues Zach & Christina Are Together After 'The Bachelor'
By Grace Wehniainen
Get Even More From Bustle — Sign Up For The Newsletter
From hair trends to relationship advice, our daily newsletter has everything you need to sound like a person who’s on TikTok, even if you aren’t.