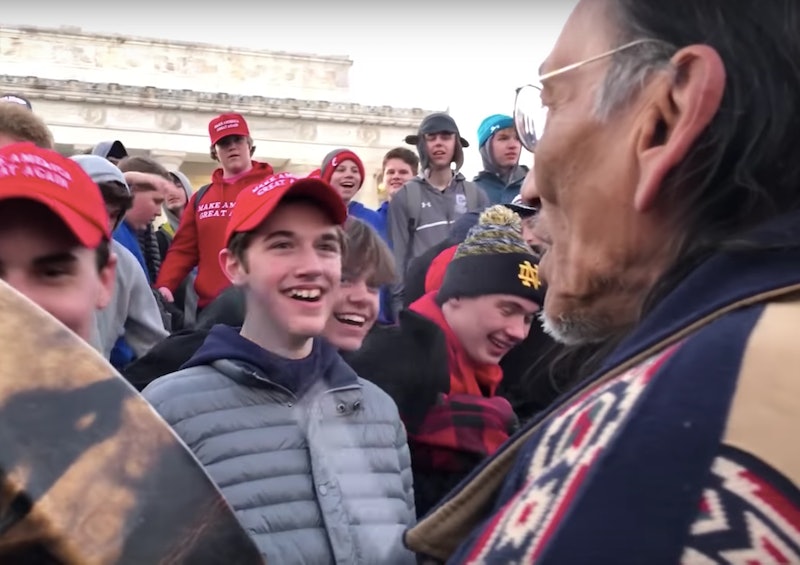 In this op-ed, Rebecca Nagle — a writer, organizer, and citizen of Cherokee Nation — speaks to Native Americans about how a viral video of high school students' encounter with Native American advocate Nathan Phillips reminded them of the racism they face on daily basis.

In a video that’s been seen widely across the United States, Omaha citizen Nathan Phillips sings the American Indian Movement Anthem in front of the Lincoln Memorial in Washington, D.C. while students from Covington Catholic High School jump, laugh, and perform the tomahawk chop. During the now-famous encounter, one high schooler named Nick Sandmann stares Phillips down, smirking.

“I know that look,” says Megan Red Shirt-Shaw, who is Oglala Lakota and a PhD student at the University of Minnesota. “I have seen it my whole life. I don’t need 500 camera angles or 15 articles to tell me what it is. This is a lived experience.”

The video was met with immediate outrage and condemnation from people who called the behavior of the “Make America Great Again” hat-wearing teenagers an example of “Trump’s legacy.” But the problem lies not simply with the president, his supporters, anti-abortion activists, or elite private schools. The problem is with America.

For Red Shirt-Shaw, racism is a daily experience. She says she and some friends were pulled over by police when they were in high school, and they were asked to prove they were United States citizens. Then, on a later cross-country road trip, she and her partner were pulled over and interrogated by police.

“In those moments it doesn’t matter that I am in a PHD program,” she says. “I’m treated by how people perceive me, as a Native woman.”

Guy Jones, who is Hunkpapa Lakota, says he wasn’t surprised by the Covington students’ behavior. He witnessed backlash when Indigenous Peoples' Day replaced Columbus Day in Cincinnati, which is in the same metropolitan area as Covington Catholic High School. Opponents of the change claimed that it would erase history; legislation to mark Indigenous People's Day was defeated multiple times before it passed in 2018.

“People have a total lack of acknowledgement and regard for Native people,” he says. “People have called me a red n*****. I’ve been spit on before, I’ve had stuff thrown at me. I’ve been shot at a couple of times. I don’t want to say I’ve become immune to it, but in a way I have.”

"The erasure of Indigenous voices, both past and present, says our lived experiences are inferior to those of white people."

These statistics illustrate the systemic racism that Native Americans face, and yet they're perceived as unaffected by it. In part, this is because Native Americans are largely erased from the news media. Rarely do their stories spark national conversations.

Case in point: You probably didn’t hear about the public school teacher who called her student a “bloody Indian” and cut off part of another Native student’s braid, in what the school district referred to as a “Halloween stunt.” There was no national outcry after drunk hockey fans poured beer on elementary school students and called them racial slurs — nor was there outrage after that town’s local paper ran a front page story the next day implying the kids were to blame. Just one person was charged with harassing the students, and he later was acquitted of disorderly conduct. The newspaper apologized for its headline.

In some cases, the stories that have gone ignored were incredibly tragic. Jason Pero, Loreal Tsingine, Jeanetta Riley, and Mah-hi-vist Goodblanket — who were all killed by police — received little national press. And the murders of Indigenous women Hanna Harris, Olivia Lone Bear, and Mackenzie Howard were hardly noticed outside Indian Country.

“The erasure of Indigenous voices, both past and present, says our lived experiences are inferior to those of white people,” says Sarah Sunshine Manning, who is Shoshone-Paiute and the director of communications at NDN Collective, an organization that works to build the power of Indigenous Peoples, communities, and Nations. “And this gives the dominant culture every justification to continue belittling us, erasing us, killing us, and forgetting about us.”

There are approximately 5 million Native Americans in the United States, many of whom have their own stories of daily aggression, discrimination, and violence. What Nathan Phillips endured was not new or surprising. What is new is that people are paying attention.