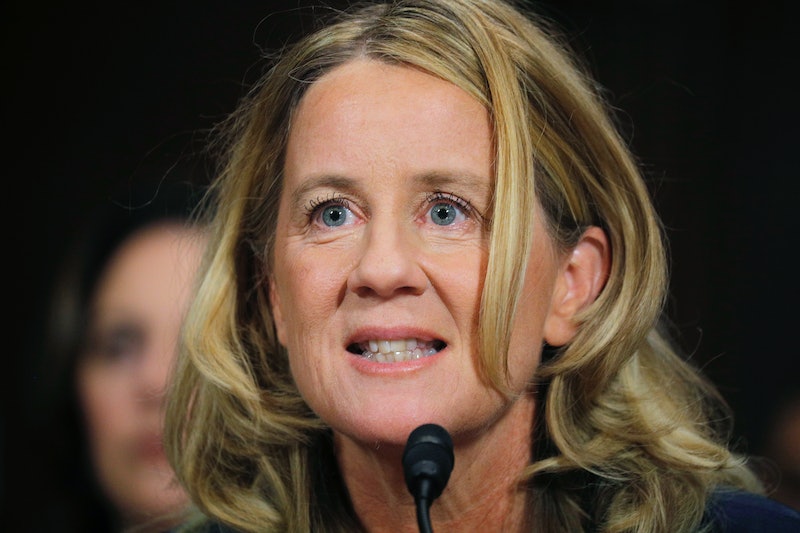 In the wake of her appearance before the Senate Judiciary Committee last Thursday, RAINN's sexual assault hotline saw a record number of calls the day after Christine Ford testified. According to The Huffington Post, the National Sexual Assault Hotline, which is administered by RAINN, received over 3,000 calls on Friday, which made it the busiest day in the history of the hotline. And this wasn't a small margin of increase for the organization: in a statement, RAINN reported that this was a 738 percent increase of calls, in comparison to an average day.

In the statement, RAINN President Scott Berkowitz offered a hypothesis for why the volume of calls increased so drastically after the hearing. He said:

History shows us that when high-profile allegations such as these are in the news it often causes others to reach out too. This story has clearly resonated with survivors, and has led thousands to reach out for help for the first time. Over this past year, following the cases of Weinstein and Cosby and the explosion of #MeToo, our numbers have been growing pretty rapidly, but we’ve never seen anything like this before.

Both Ford and Supreme Court nominee Brett Kavanaugh have remained steadfast in their respective claims throughout the days leading up to and following their hearings. Ford maintains that Kavanaugh attempted to rape her in the summer of 1982, and told the Senate Judiciary Committee that Kavanaugh's laughter during the act was "indelible in the hippocampus" for her.

In addition to the spike of calls on Friday, RAINN reported an overall monthly spike of 157 percent for the month of September.

Ford's testimony before the Senate Judicial Committee inspired a range of emotional responses from viewers, with many women calling in to C-SPAN to share their own stories of trauma. CNN notes one particular caller, Brenda, who told C-SPAN that she had been sexually assaulted in second grade. She said, "This brings back so much pain. I thought I was over it, but it's not. You will never forget it. You get confused and you don't understand it but you never forget what happened to you. It's just breaking my heart."

One of the central themes of the Kavanaugh/Ford hearing has been that of survivors speaking up and speaking out about their experiences and shared trauma. In fact, the White House's decision to order an FBI investigation into the allegations against Kavanaugh has been attributed by several publications to the decision of two sexual assault survivors to share their story with Sen. Jeff Flake, a Republican senator who has been on the fence on his Kavanaugh vote.

Flake, who initially said he was going to vote yes on Kavanaugh, was confronted by the two women while he was trying to get into an elevator on Friday. The women alternated telling their respective stories, with one woman specifically asking that Flake look at her in the eyes and tell her that her trauma doesn't matter.

Shortly thereafter, Flake announced that he may not support Kavanaugh's confirmation unless an FBI investigation took place.

Later, in an interview with CBS, one of the women who confronted Flake said, "I was doing the work of making my voice heard, bringing others to make sure that the decision was informed by the appearances of people who stood to lose so much."

For any sexual assault survivors who are looking to share their story with someone, free and confidential support is available 24/7 through the National Sexual Assault Hotline at (800) 656-HOPE.