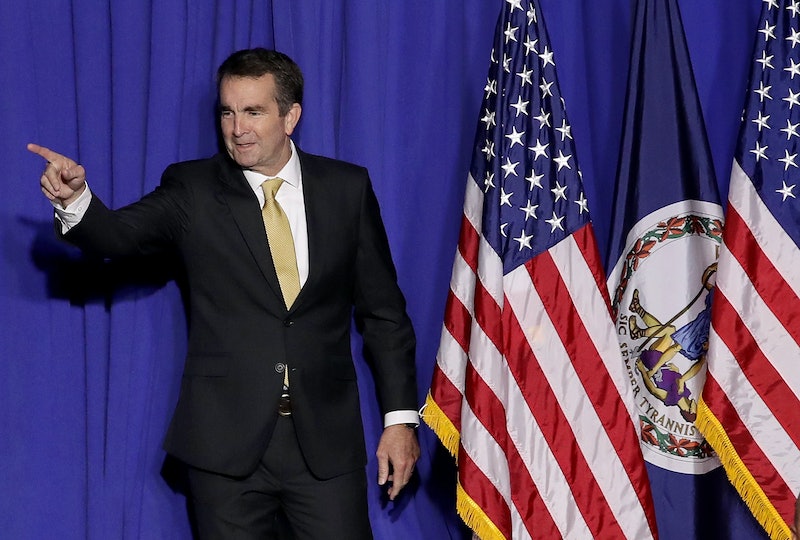 On Friday night, Virginia Gov. Ralph Northam publicly apologized for allegedly posing for a photo in a racist costume when he was a medical student over 30 years ago, though he did not specify which costume he wore. But less than 24 hours later, Northam has refused to resign, and according to The New York Times, he has been making calls to fellow Democratic lawmakers to deny that he was actually in the photo. Bustle has reached out to Northam's office for comment.

The photo in question, which initially resurfaced on Friday, is reportedly from Northam's medical school yearbook page, and shows one person in blackface standing beside someone wearing a Ku Klux Klan robe. After the photo came to light, Northam issued a statement and video in which he apologized for the "clearly racist and offensive" photo.

"I am deeply sorry for the decision I made to appear as I did in this photo and for the hurt that decision caused then and now,” Northam said, per The Washington Post. “This behavior is not in keeping with who I am today and the values I have fought for throughout my career in the military, in medicine, and in public service. But I want to be clear, I understand how this decision shakes Virginians’ faith in that commitment.”

Numerous prominent lawmakers — from House Speaker Nancy Pelosi to Vermont Sen. Bernie Sanders — have called on Northam to step down. The Virginia governor has also received calls for his resignation from Republicans, such as Virginia Rep. Denver Riggleman. Despite these bipartisan demands for his resignation, however, a Northam spokesperson said at a news conference on Saturday that the governor would not step down, per CNN. The New York Times also reported that Northam is determined to prove that he was not in the photo.

On Saturday, Virginia State Sen. L. Louise Lucas and other state Democrats reported receiving calls from Northam, in which he reportedly distanced himself from the yearbook and alleged that photos on different pages may have been mixed up. During a press conference on Saturday, Northam reiterated this point; he told reporters he was confident that he was not in the photo. However, he acknowledged that he had "darkened" his face with shoe polish on a separate occasion — during a 1984 dance competition in San Antonio, in order to emulate Michael Jackson.

Northam also told reporters that he vividly remembered the San Antonio incident, and argued that he would have similarly remembered posing in the racist photo had it actually been him.

"I will take responsibility for what happened in San Antonio, I have learned from that," Northam said, "but this is not my picture.

Multiple reporters then asked Northam what the distinction was between his performance in blackface and the racist photo — even if he wasn't in the photo, they asked, why should he not resign after admitting that he once performed in blackface? Northam acknowledged that both things were wrong, but then said that there is "a difference between me dressing up as Michael Jackson in a dance contest" and posing for a photo next to someone in a KKK robe.

Northam added that resigning would be the easy way out, and said that he would instead "continue doing the business of Virginia."

"I could spare myself from the difficult path that lies ahead," Northam said. "I could avoid an honest conversation about harmful actions from my past. I cannot in good conscience chose the path that would be easier for me in an effort to duck my responsibility to reconcile."

Shortly after Northam's press conference, Democratic National Committee chair Tom Perez issued a statement calling on the Virginia governor "to step aside," arguing that Lieutenant Governor Justin Fairfax would pave the way for "a brighter future" for Virginia.