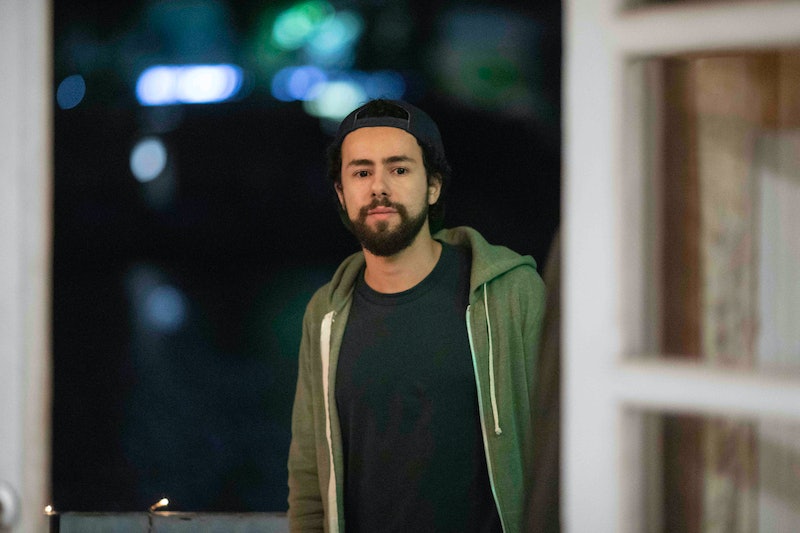 It's easy to see in Ramy Youssef's comedy videos that he can get a laugh out of an audience, and his ability to mine his personal life for jokes has gotten him far. He's performed stand-up on The Late Show with Stephen Colbert, signed on to film an hour-long HBO special, and is gearing up to release his new Hulu series, Ramy, on April 19. Suffice it to say, he's having kind of a moment.

Ramy is the latest in a line of semi-autobiographical shows created by comedians, such as Pete Holmes' Crashing on HBO and Maria Bamford's Lady Dynamite on Netflix. It stars Youssef as the titular character, a Muslim, third culture kid navigating life in suburban New Jersey. But rather than rebelling against his religious upbringing — as we've seen in projects like Master of None and The Big Sick — Youssef's character embraces it. He wants to figure out how to be a faithful Muslim amid what can feel like a widely agnostic generation. He goes to bars and parties, but doesn't drink. He has casual sex, but feels guilty about it afterward. It's not a PSA for how to be a better, more religious person, but rather an honest, authentic depiction of a man trapped between two worlds. Ramy isn't afraid to find humor in the darker, messier aspects of everyday life — just as Youssef isn't in his comedy.

Youssef's Muslim faith is as much a part of his stand-up as it is his life, and he understands that a lot of people in America will dislike him simply because of that. "If I watch Fox News for more than 10 minutes I'm like 'F*ck... am I gonna do some sh*t?'" he he joked during a set at Backyard Busk. "They make it seem inevitable ... like I'm gonna turn 30 and just get a Hogwarts letter from ISIS." It's funny, but it also speaks to the reality of living in a world in which Islamophobia is still woefully active.

Comedians have been making jokes about Donald Trump since long before he was president, and Youssef's pre-election material attempts to make sense of the then-candidate by explaining that he's not a person as much as he is a feeling. "You just feel Trump. It just hits you. Sometimes you're mad and you're upset and you wanna curse somebody out, but sometimes you're Trump and you're just like, 'F*ck China,'" he said. In Youssef's mind, Trump channeled that feeling of frustration into a successful campaign — and eventually, a presidency.

On "Coming Out" As A Religious Person

Youssef made his network television debut on the Late Show with Stephen Colbert in May of 2017 — nearly two years before the premiere of Ramy. His set included jokes about terrorism, the Muslim Ban, Fake News, and believing in God. "I grew up in a town where I watched my gay friends struggle to come out in a religious community," he explained. "Now I live in L.A., where I'm a religious person struggling to come out to the gay community."

The common thread amongst all of Youssef's comedy is a sense of earnestness and an interest in examining his own feelings about identity and how other people perceive him. This down-to-earth approach carries over to Ramy, and fans of the show or his comedy would do well to keep an eye out for his hour-long special on HBO later this year. There are plenty of comedians releasing TV shows and stand-up specials, but right now, there really doesn't seem to be anyone quite like Youssef in comedy.