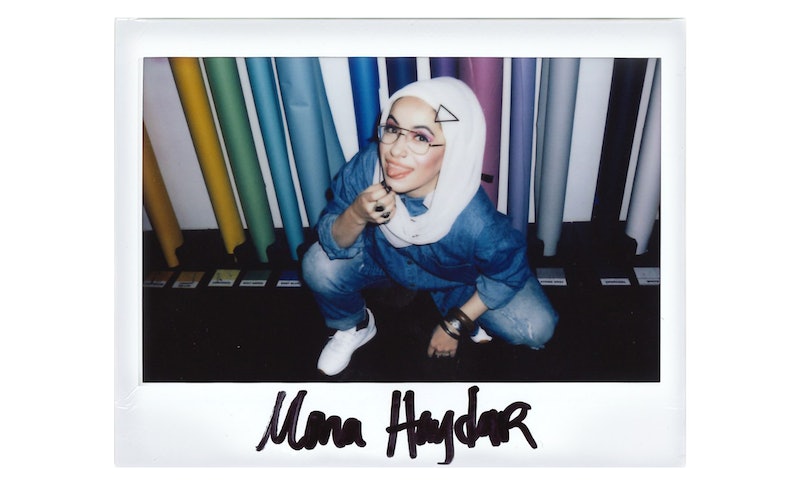 When celebrities hang out at Bustle, we want to give them the chance to leave their mark. Literally. So we hand them a pen, a piece of paper, a few questions, and ask them to get creative. The rest is up to them. This time, rapper Mona Haydar is leaving her mark in the Bustle Booth.

Syrian-American, Muslim hijabi, mother of two, rapper, chaplain — it’s hard to sum up who Mona Haydar is in one word. She's small, but her huge smile and positive energy immediately fill the room when she enters Bustle’s New York office recently. She's just dropped her first EP, Barbarican, on Nov. 2, and when she settles in, she tells me all about the class she took while pursuing a Master’s of Art in Christian Ethics on postcolonial stories and decoloniality that inspired the title of the album.

“I was just really interested in the ways in which we can rewire our brains to be more like our ancestors and less like our colonizers,” she says, sipping on a cup of black coffee. “I'm more interested in thinking the way my great great grandmother did, who did not believe that blue eyes were more beautiful or fair skin was more beautiful."

Thus, the name Babarican was born. The five song-long EP, along with Haydar's previous singles, address a wide range of subjects from sexual abuse and suicide to religious critics and the rejection of Western ideals and white supremacy. And the artist somehow manages to cover all of this while still making bops.

“I'm so grateful I did poetry for 15 years before I started doing music,” she reflects. “It allowed me to speak about things that maybe are more serious in a way that is impactful without being so intense and heavy… I feel like I teeter the line as a person of color with very fair skin, where I can like make fun of white supremacy while also seeking and striving to use my privilege to dismantle it. Like, take it down with humor.”

Haydar has only been making music for a year and a half now, but her videos have millions of views and her debut song “Hijabi (Wrap My Hijab)” was named one of the “25 Top Feminist Anthems” by Billboard in 2017. Growing up in Flint, Michigan, she listened to hip-hop and rap regularly, and today she cites Mos Def and Talib Kweli as two of her favorite rappers and greatest musical influences.

“It's Black culture that gave me my voice, you know?” she explains. “And said ‘No, you need to speak your truth. And you're American and this is American culture and they're going to tell you not use your voice in a way that's authentic and true to you because they want to take away your power... They only want to do that because they don't want you to shine.'"

Yet while hip-hop has been a large part of Haydar's life for years, she concedes that she is “constantly thinking about appropriation and what it is to be a non-black woman of color doing this work.” But she feels good about the work that she is doing within the realm, even if not everyone digests and understands the messages that she’s attempting to spread with her music as much as she'd like. Still, “the people who it's for will get it and appreciate it,” she says. “And the people it's not for, they have their music that they like and listen to. Everything ain't for everybody.”

Through her songs and videos, Haydar seeks to authentically portray herself and her community — which she describes as “wildly intersectional, beautifully intersectional” — with diverse and dynamic visuals. As an independent artist with creative freedom, she sees it as her responsibility to do women of color justice in their media portrayal.

And when asked what exactly decolonization looks like to her, Haydar's response is almost immediate. “It looks like radical self love,” she says, nodding. “It looks like loving myself in spite of the colonial model, which is still in existence… loving myself while doing the really hard work of undoing white supremacy inside of myself, undoing anti-blackness inside of myself, because we're all raised in that… it means really being mindful and conscious of what I'm doing and what I'm putting out into the world.”

For more on Haydar, check out her Bustle Booth below.