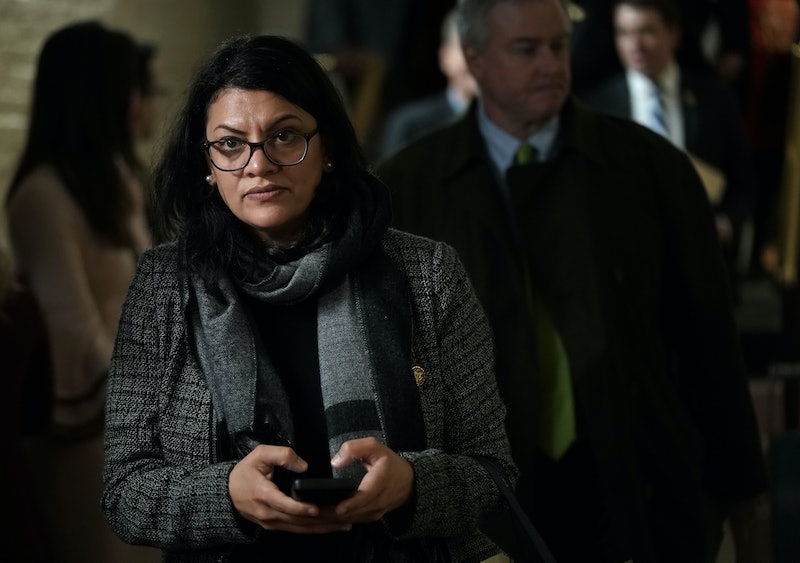 When Rep. Rashida Tlaib swore her oath of office and officially entered the House of Representatives in January, she became one of the first two Muslim women ever to take that oath. After a month and a half in Congress, Rashida Tlaib revealed the hardest part of her job, and explained how it's directly related to her identity.

"The hardest part of serving in Congress as a [woman of color] & as a 'first' is how people hear you differently," Tlaib tweeted on Monday. "No matter how much we take on the hate & stay true to who we are through our experiences, our voices are shushed and reduced. We aren't perfect, but neither is this institution."

She continued, doubling down on her commitment to working through the obstacles placed in front of her — also making a request for a change.

"There is no doubt that my life's work is centered on equality and justice. I am not easily bullied away from choosing peace and truth dialogue," Tlaib tweeted the same day. "It is the reason my residents elected me. I hope my colleagues see my presence as an opportunity for peace. I only ask to be heard."

After becoming one of the country's most prominent Muslim women, Tlaib has already found herself on the receiving end of Islamophobia. In January, for example, a city commissioner from Florida publicly posted a comment on a petition to remove Tlaib from office, saying "A Hamas-loving anti-Semite has NO place in government! She is a danger and [I] would not put it past her to become a martyr and blow up Capitol Hill," as USA Today reported.

Tlaib responded to those remarks by shining a light on the ways in which President Donald Trump and his party have encouraged such rhetoric.

"This sort of hateful anti-Muslim rhetoric doesn’t happen in a vacuum - this President embraced it and Republicans have happily gone along with it," Tlaib tweeted in response.

The comment came after Tlaib used an expletive to call for Trump's impeachment, a statement which caused a significant amount of blowback, as The Washington Post noted. This included a "We the People" petition to remove her from office and questions from the far right about her motivations for running for office.

She's not alone in receiving increased scrutiny that sometimes veers into outright attacks, however. Fellow freshman Rep. Ilhan Omar has also become a frequent target of criticism, specifically over what some have claimed is a pattern of anti-Semitic tropes in various statements of hers, as The Guardian described. Both Tlaib and Omar have criticized Israel and its actions towards Palestine, and many observers have described those critiques as anti-Semitic. The two Muslim congresswomen have repeatedly declared their support for American Jews.

Tlaib's statements on how her presence in the House has been received, though, reflect the optimism for change and determination that brought her to Congress in the first place. Perhaps more than anything else, her comments recognize the particularly difficult position she's in — and in that recognition, show that she's prepared to keep working.