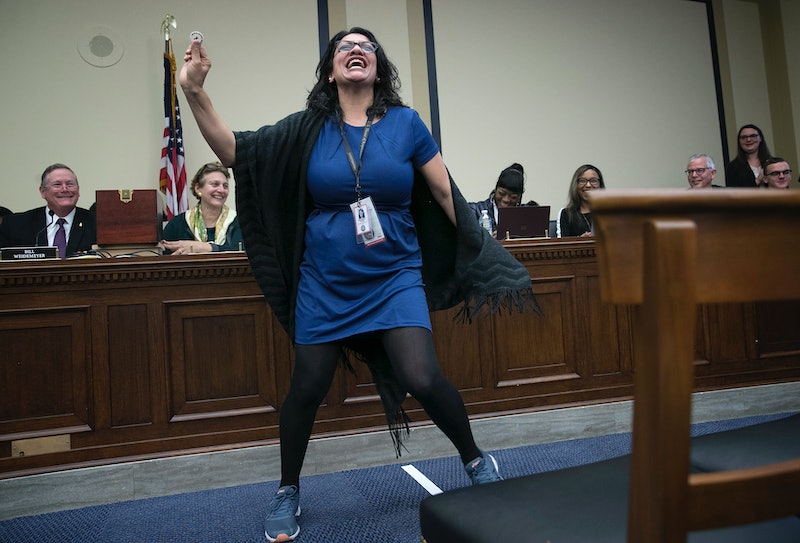 During the 2018 midterm elections, Rashida Tlaib made history by becoming the first Palestinian-American woman to be elected to Congress. In a tribute to her heritage, Tlaib plans to wear a traditional Palestinian gown — called a thobe — to her swearing-in ceremony next month, and she has already shared a sneak peek of her thobe on social media.

On Friday, Tlaib posted a photo of her embroidered thobe to Instagram, with the caption, "Sneak peek: This is what I am wearing when I am sworn into Congress." She also included the hashtags #PalestinianThobe and #ForMyYama, which according to CNN is the Arabic word for "mother." The thobe that Tlaib plans to wear is her mother's, The New York Times reported earlier this year.

Tlaib, a Michigan Democrat, will — alongside Minnesota Democrat Ilhan Omar — be one of the first Muslim women to serve in Congress. For Tlaib and other Palestinians, wearing a thobe is a way to show pride in their Palestinian heritage, and this heritage is one of the driving components of Tlaib's politics. She told The New York Times in August that her relatives' fight to access health care and education in Palestine inspires her to fight for economic and social justice here in the U.S.

Tlaib is not the only newly-elected official to wear traditional clothing to her swearing-in ceremony. Earlier this month, Ruth Buffalo — the first Native American woman to be elected to North Dakota's state legislature — wore traditional Native American dress when she was sworn in, The Hill reported. A member of the Mandan, Hidatsa and Arikara Nation, Buffalo told The Huffington Post that she also carried a fan made with eagle feathers to pay homage to her heritage, and that some of the women in her family who attended the ceremony wore traditional ribbon skirts.

“It’s part of my identity and who I am,” Buffalo told The Huffington Post. “It was to honor my ancestors, those that have gone before me, and the future generation.”

Like Buffalo, Tlaib wants to use her swearing-in ceremony to honor her heritage and traditions. According to CNN, Tlaib is the daughter of Palestinian immigrants from Beit Our al-Foqa, a West Bank village near Ramallah. The embroidery on her mother's thobe, as with any thobe, is unique, and is designed to represent the city her family is from.

It is not the first time that Tlaib has publicly paid respect to her Palestinian background, either. When she won the race to represent Michigan's 13th District last month, she attended a celebration rally with a Palestinian flag draped around her, prompting Palestinians in the West Bank to cheer her on from afar. Alongside Omar, Tlaib has also publicly voiced her support for the Palestinian-led Boycott, Divestment, and Sanctions movement against Israeli occupation, in what appears to be a first for Congress.

After she is sworn in, Tlaib reportedly plans to lead a congressional delegation to the Israeli-occupied West Bank, in lieu of the the trip freshman lawmakers typically take to Israel.