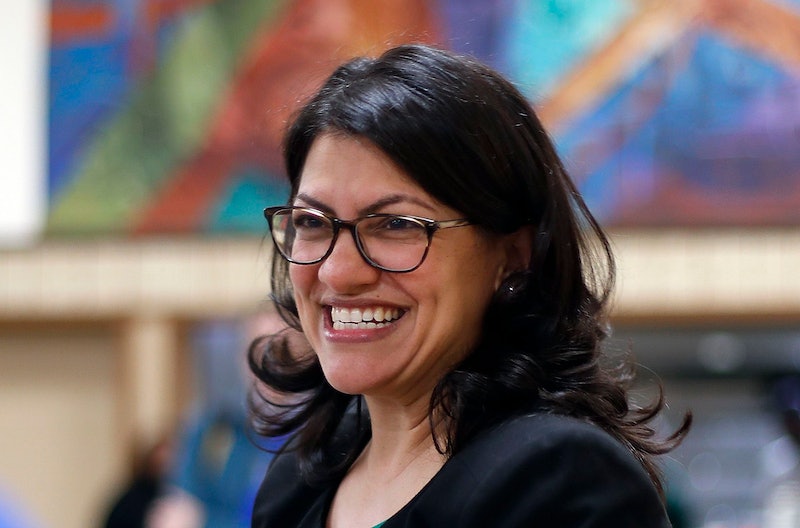 Swearing in a new member of Congress is a big deal. And on Jan. 3, the incoming congresswoman representing Michigan's 13th district, Rashida Tlaib, will be sworn in with a Quran. But it's not just any Quran: it's George Sale’s translation of the Quran from 1734, which belonged to Thomas Jefferson himself, according to the Detroit Free Press.

When Tlaib, who is one of the first two Muslim congresswomen along with Minnesota's Ilhan Omar, is sworn in as a House representative, this specific copy will be retrieved from the Rare Book and Special Collections Division at the Library of Congress. Tlaib told the Detroit Free Press that using the Quran for her oath ceremony is meant to familiarize Americans with Islam as a faith.

Over the years, researchers have attempted to understand the public's view on Islam. In 2017, for example, a Pew study revealed that although generally Americans' attitudes toward Islam had gradually warmed up, most polled American conservatives still viewed the religion in negative terms.

"It’s important to me because a lot of Americans have this kind of feeling that Islam is somehow foreign to American history," Tlaib told the Detroit Free Press. "Muslims were there at the beginning. ... Some of our founding fathers knew more about Islam than some members of Congress now."

Placing her hand on the Quran on Jan. 3 isn't the only decision she's made for her swearing-in ceremony; Tlaib will also don a traditional Palestinian gown on the special day. She gave her followers a glimpse of the red "thobe" on Instagram.

Although Tlaib is one of the two first American Muslim women to be sworn in to the House, she is certainly not the first Muslim to use Jefferson's copy of the translated Quran for a swearing-in ceremony.

That much is false. According to historians, there is no rule that a new member of Congress has to use a specific kind of book to be sworn in. If they want, they don't even have to use any book at all.

It's entirely up to the elected individual to decide what they would like to place their hand on during that important occasion when the House speaker asks them to, among other things, "support and defend the Constitution of the United States against all enemies, foreign and domestic."

Tlaib told the Detroit Free Press that she wasn't worried about the possible backlash that could come after her swearing in. "My mere existence," she said, "that I’m even of Muslim faith, is going to be a problem for them with or without me swearing in on any Quran."

Considering that the United States is a diverse country where Pew's 2018 research claims Muslims make up about 1.1 percent of the country's population, Tlaib's gesture may just deliver her message about celebrating diversity and accountability.