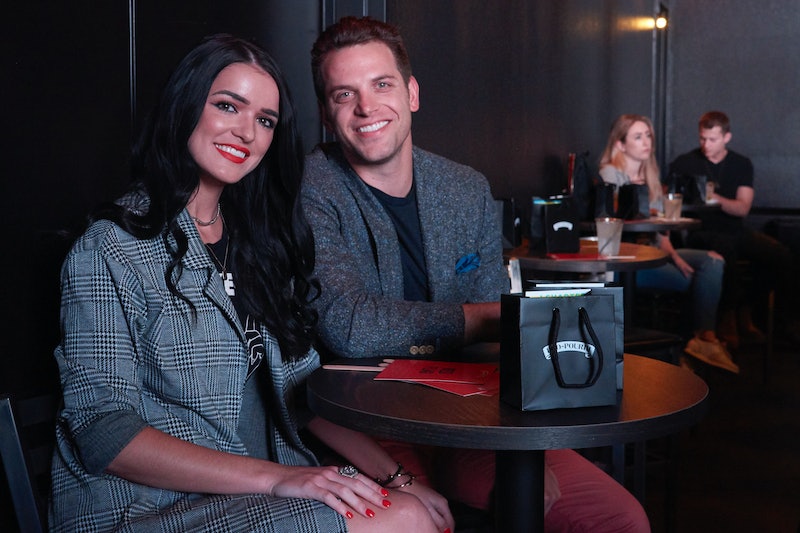 Adam Gottschalk and Raven Gates have been going strong since Season 4 of Bachelor in Paradise. They're currently living together in Dallas, Texas. So what's up next for the reality TV couple? Well, Adam teased an engagement to Raven happening sometime in 2019 during the Feb. 26 episode of Rose Buds: The Most Dramatic Podcast Ever.

Before discussing any plans to propose, Adam told the live audience, "Everybody has been waiting for ABC to pay for a wedding. We personally have been offered lots and lots of money to have a wedding televised and aired." Wait, what? They're not even engaged yet. But this needs to happen, right? Who doesn't want to see Raven and Adam back on TV?

Well, unfortunately for fans, that's probably not in the cards. Adam confessed, "We don't want to do it." Why not? He shared, "I feel like we are going to do things very organic."

And that led to the revelation that Bachelor in Paradise fans have been hoping for. Adam began, "And, I know you're going to ask this question later on, I'm going to just address it now." He then declared, "Sometime this year, in 2019, we will be engaged."

"We want to take the right steps to do that. We love sharing our lives with everybody here, but we want to stay private in our own respective way."

Raven chimed in with, "I think that's the first time you've ever said that." Aww!

Even so, that wasn't the first time that the BIP fan-favorites publicly discussed the possibility of an engagement. In an August 2018 Instagram post, Raven referred to her and Adam as a pair of "Dinks," which she defined as "Dual income, no kids." She concluded her Instagram post with, "PS marriage & kids are in the plan- you just gotta enjoy the stage your in!!"

Raven told the former Bachelorette, "I think that's coming soon. We're going to the temple this Friday to have interfaith counseling [about] family, engagement, and children." Raven is Christian and Adam is Jewish.

Raven explained that the counseling is to help them figure out the ins and outs of being an interfaith relationship. This includes "what they believe and how they're going to raise their children and everything like that." She even said it relates to "how we [would] have a wedding."

And it does sound like a wedding is going to happen, it just won't be as public as their relationship's reality TV origins. Still, the couple has been pretty open with their followers on social media, so it's likely that they will share some photos and videos when they actually do get married.

In her interview with Kaitlyn, Raven explained why she shares so much of her relationship on social media. She declared, "That's not a facade. That's not to get likes. That's just to show a glimmer of Adam and I really in love."

"People really have no idea how happy I am. When you post something or share something, don't do it for the validation of others. Let your personal life be so much more than what your Instagram shows. More than what TV can show. More than what social media could ever portray it to be."

That's exactly what Raven and Adam have: a love that is so much more than what TV could ever show. It makes perfect sense that they wouldn't want to televise their wedding. As upset as some fans might be by that, the major news here is that there's a marriage proposal coming in 2019.