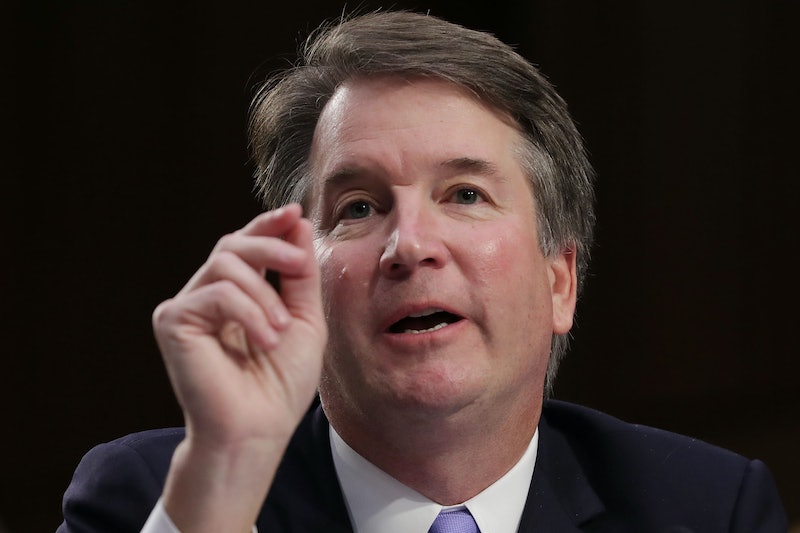 On Sunday, a second woman accused Supreme Court nominee Brett Kavanaugh of sexually assaulting her, this time while they were both at Yale University. In a Monday letter addressed to Sens. Chuck Grassley and Dianne Feinstein, which is now publicly available to read, Kavanaugh responded to the new accusation, unequivocally denying any wrongdoing, and promising that he will not back down from his nomination.

While Kavanaugh was originally scheduled to receive a confirmation vote from the Senate Judiciary Committee last week, that vote was postponed after a woman named Christine Blasey Ford accused Kavanaugh of sexually assaulting her while they were both teenagers. (Kavanaugh flatly denied Ford's allegation. "This is a completely false allegation. I have never done anything like what the accuser describes — to her or to anyone," Kavanaugh said in a statement.")

In light of the ongoing turmoil, Kavanaugh addressed the Senate directly. The full letter reads:

When I testified in front of the Senate three weeks ago, I explained my belief that fair process is foundational to justice and to our democracy.

At that time, I sat before the Senate Judiciary Committee for more than 31 hours and answered questions under oath. I then answered more questions at a confidential session. The following week, I responded to more than 1,200 written questions, more than have been submitted to all previous Supreme Court nominees combined.

Only after that exhaustive process was complete did I learn, through the news media, about a 36-year-old allegation from high school that had been asserted months earlier and withheld from me throughout the hearing process. First it was an anonymous allegation that I categorically and unequivocally denied. Soon after the accuser was identified, I repeated my denial on the record and made clear that I wished to appear before the Committee. I then repeated my denial to Committee investigators — under criminal penalties for false statements. All of the witnesses identified by Dr. Ford as being present at the party she describes are on the record to the Committee saying they have no recollection of any such party happening. I asked to testify before the Committee again under oath as soon as possible, so that both Dr. Ford and I could both be heard. I thank Chairman Grassley for scheduling that hearing for Thursday.

Last night, another false and uncorroborated accusation from 35 years ago was published. Once again, those alleged to have been witnesses to the event deny it ever happened. There is now a frenzy to come up with something — anything— that will block this process and a vote on my confirmation from occurring.

There are smears, pure and simple. And they debate our public discourse. But they are also a threat to any man or woman who wishes to serve our country. Such grotesque and obvious character assassinations — if allowed to succeed — will dissuade competent and good people of all political persuasions from service.

As I told the Committee during my hearing, a federal judge must be independent, not swayed by public or political pressure. That is the kind of judge I will always be. I will not be intimidated into withdrawing from this process. The coordinated effort to destroy my good name will not drive me out. The vile threats of violence against my family will not drive me out. The last-minute character assassination will not succeed.

I have devoted my career to serving the public and the cause of justice, and particularly to promoting the equality and dignity of women. Women from every phase of my life have come forward to attest to my character. I am grateful to them. I owe it to them, and to my family, to defend my integrity and my name. I look forward to answering questions from the Senate on Thursday.

As accusations against Kavanaugh continue to dominate public discourse, debate surrounding whether or not confirmation proceedings should continue has become an extremely divisive issue. As protests mount and rhetoric intensifies, what remains certain is that these events will undoubtedly mark an historic moment in modern American history.