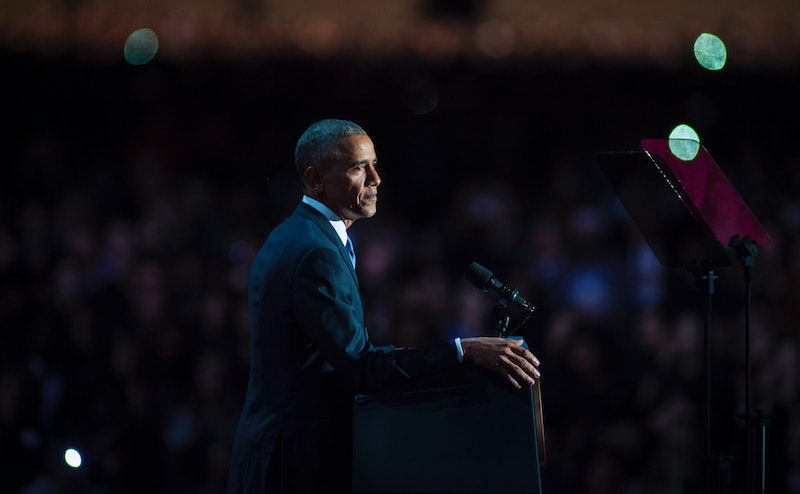 President Obama commuted Chelsea Manning's sentence on Jan. 17, just three days before he left the White House. Manning, who was sentenced to 35 years in prison for leaking classified information about the army to Wikileaks in 2010, will be released on May 17, 2017. You can read Manning's commutation statement from her application to President Obama for a better understanding of why she thought she deserved to walk free.

Obama has commuted the sentences of more federal inmates than the last 11 presidents combined, but his latest commutation will likely be one of his most high-profile cases. Manning has been in and out of the news since her 2013 sentencing. The documents she leaked in 2010 were considered "damaging to national security," according to White House Press Secretary Josh Earnest (though The New York Times did note that those documents were not "classified above the ... 'secret' level.") Moreover, she attempted to commit suicide twice throughout her seven years in prison; both instances made headlines.

Manning's commutation statement to Obama began with a reflection on her actions: "Three years ago I requested a pardon related to my conviction for disclosing classified and other sensitive information to the media out of concern for my country, the innocent civilians whose lives were lost as a result of war, and in support of two values that our country holds dear- transparency and public accountability," she wrote. "As I reflect on the prior clemency petition I fear my request was misunderstood."

Manning's entire commutation statement is nearly seven pages long. In it, she reflects on her past actions, as well as how she got involved with the military and what led to her eventual leaking of classified information.

"As I explained to the military judge who presided over my trial, and as I have reiterated in numerous public statements since these offenses occurred, I take full and complete responsibility for my decision to disclose these materials to the public. I have never made any excuses for what I did," Manning wrote. "I pleaded guilty without the protection of a plea agreement because I believed the military justice system would understand my motivation for the disclosure and sentence me fairly. I was wrong."

Manning went on to address her sentencing — 35 years — which, according to the Times, is much longer than any other U.S. sentence for leak cases. (They typically range from one to three years.) "The military judge sentenced me to thirty-five years confinement - far more than I could have ever imagined possible, as there was no historical precedent for such an extreme sentence under similar facts," Manning wrote. "My supporters and legal counsel encouraged me to submit a clemency petition because they believed the conviction itself coupled with the unprecedented sentence was unreasonable, outrageous and out of line with what I had done. In a state of shock, I sought a pardon."

Although she initially sought a pardon, Manning concluded her statement by rescinding that ask:

I have served a sufficiently long sentence. I am not asking for a pardon of my conviction. I understand that the various collateral consequences of the court-martial conviction will stay on my record forever. The sole relief I am asking for is to be released from military prison after serving six years of confinement as a person who did not intend to harm the interests of the United States or harm any service members.

I am merely asking for a first chance to live my life outside the USDB as the person I was born to be.