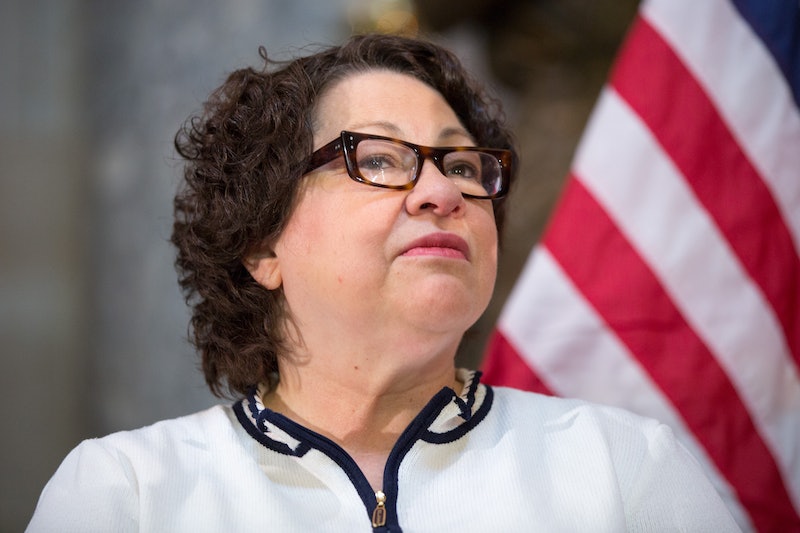 Justice Ruth Bader Ginsburg agreed with Sotomayor's assessment that the travel ban is not only unconstitutional, but was also "motivated by anti-Muslim animus." You can read the full dissent on the Supreme Court's website starting on page 65 of the 92-page opinion. Unlike Justice Stephen Breyer’s dissent, which said he found "evidence of antireligious bias," Sotomayor's much longer dissent blatantly says the policy is discriminatory.

Citing quotes from the president saying the ban was meant to keep Muslims out of the country, she claims that the travel policy "masquerades behind a façade of national-security concerns." Making her stance very clear from the beginning, Sotomayor began her dissent by writing:

"The United States of America is a Nation built upon the promise of religious liberty. Our Founders honored that core promise by embedding the principle of religious neutrality in the First Amendment. The Court’s decision today fails to safeguard that fundamental principle."

Sotomayor specifically calls out the president for enacting the policy in question after that heated intro — as well as her fellow justices for "ignoring the facts, misconstruing our legal precedent, and turning a blind eye to the pain and suffering the Proclamation inflicts upon countless families and individuals, many of whom are United States citizens," as she put it.

"It leaves undisturbed a policy first advertised openly and unequivocally as a 'total and complete shutdown of Muslims entering the United States' because the policy now masquerades behind a façade of national-security concerns. But this repackaging does little to cleanse Presidential Proclamation No. 9645 of the appearance of discrimination that the President’s words have created. Based on the evidence in the record, a reasonable observer would conclude that the Proclamation was motivated by anti-Muslim animus."

She outlines the numerous times Trump explained his plan as a ban on Muslim visitors, both during the 2016 election and after taking office. Yet she explains that it wasn't the court's responsibility to "denounce” these offensive statements," but rather to decide whether the primary purpose of the policy is to discriminate against Muslims. Sotomayor argues that was clearly the primary purpose.

"Moreover, despite several opportunities to do so, President Trump has never disavowed any of his prior statements about Islam. Instead, he has continued to make unrelenting attack on the Muslim religion and its followers. Given President Trump’s failure to correct the reasonable perception of his apparent hostility toward the Islamic faith, it is unsurprising that the President’s lawyers have, at every step in the lower courts, failed in their attempts to launder the Proclamation of its discriminatory taint."

"This formal repudiation of a shameful precedent is laudable and long overdue. But it does not make the majority’s decision here acceptable or right. By blindly accepting the Government’s misguided invitation to sanction a discriminatory policy motivated by animosity toward a disfavored group, all in the name of a superficial claim of national security, the Court redeploys the same dangerous logic underlying Korematsu and merely replaces one 'gravely wrong' decision with another."