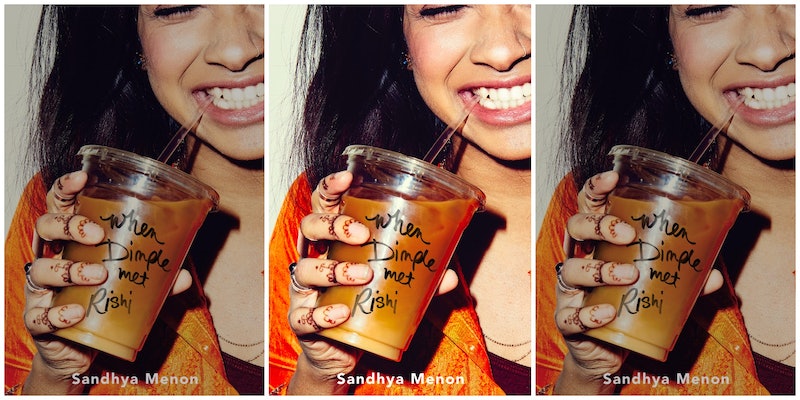 If you're into YA, or just book news in general, you have most definitely heard people talking (and raving) about Sandhya Menon's debut, When Dimple Met Rishi; and now it's time to read it with Bustle's American Woman Book Club this June. As you know if you've been following along for a while, every month this year the club has come together online on Goodreads, and in person at The Strand Bookstore in New York City, to discuss a timely read that speaks to some aspect of the incredibly diverse experience of being a woman. In June, we get all of that with a side of laugh-out-loud rom-com that will give you the feels while also introducing you to the Indian-American families of Dimple Shah and Rishi Patel. Trust me when I say it's the perfect beach read.

Dimple Shah has it all figured out. With graduation behind her, she’s more than ready for a break from her family, from Mamma’s inexplicable obsession with her finding the “Ideal Indian Husband.” Dimple knows they must respect her principles on some level, though. If they truly believed she needed a husband right now, they wouldn’t have paid for her to attend a summer program for aspiring web developers…right?

Rishi Patel is a hopeless romantic. So when his parents tell him that his future wife will be attending the same summer program as him—wherein he’ll have to woo her—he’s totally on board. Because as silly as it sounds to most people in his life, Rishi wants to be arranged, believes in the power of tradition, stability, and being a part of something much bigger than himself.

Dimple and Rishi may think they have each other figured out. But when opposites clash, love works hard to prove itself in the most unexpected ways.

When Dimple Met Rishi is the perfect summer contemporary read; romance lovers will swoon over Dimple and Rishi's connection, while also learning so much more about their Indian heritages, watching them come to respect and honor their traditions while also being true to themselves. If you like your teen love stories with diversity and a whole lot of real-world truth, you're definitely going to want to pick up a copy and follow along with Bustle this month!

To join Bustle's American Woman Book Club, all you have to do is follow us on Goodreads and take part in with the discussion!