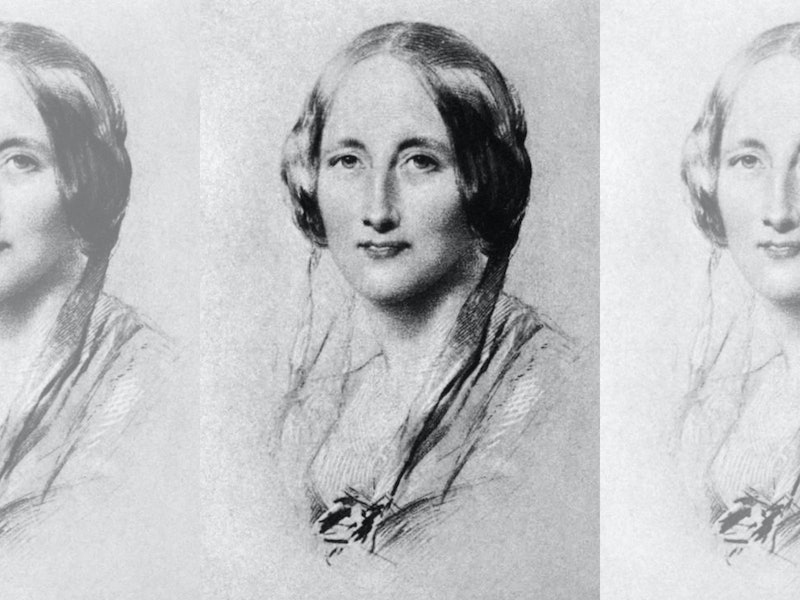 Even if all your Netflix suggestions come from the “emotional period dramas with a strong female lead” category, you might not have read Elizabeth Gaskell. One of the most active and prolific writers of the mid-1800s, she pioneered the social justice novel alongside peers like Charles Dickens. Now, she's more like an overlooked younger sister of better-known contemporaries like Jane Austen and Charlotte Brontë. Her heroines are less quippy than Austen’s and less odd than Bronte’s; her narratives are overtly religious and often moralizing, and they don’t easily translate into the modern adaptations.

Nowhere is this more the case — at least, apparently — than in Gaskell’s sprawling family saga, Wives and Daughters. I finally sat down with the book last month, hoping it would be a respite from the tense Brett Kavanaugh Supreme Court hearings that had commandeered my newsfeed and most of my attention. The novel centers on two stepsisters thrown together by their parents’ sudden marriage: cute, sweet, and annoyingly docile Molly, and the sexy, worldly, and alarmingly strong-willed Cynthia.

As the stepsisters grow closer to one another, Cynthia reveals her troubled past to Molly: years ago, as a lonely 16-year-old, Cynthia became involved with a much older man, Mr. Preston, who groomed her with money and presents and eventually convinced her to become secretly engaged to him. Cynthia once adored Preston and wrote him a series of love letters to prove it, but now that she’s older and realizes what a creep he really is, she wants to ditch him and accept the proposals of Roger, the town’s paragon of male virtue, with whom — oops! — Molly is also in love. In retaliation, Preston threatens to publicize the letters, which will irreparably smear her character. For a marriageable Victorian girl, it’s bad to be caught in a secret liaison but even worse to be known as a “jilt,” a woman who accepts and then refuses a man’s attentions. While the revelation of the letters won't do Preston any favors, it will destroy Cynthia’s, making it impossible for her to marry anyone.

The scenario here and the “incriminating” material may seem quaint. In an age where unsolicited nudes have replaced love letters and men can blackmail former partners with revenge porn, who cares what G-rated endearments Cynthia was throwing around? However, the story and the stakes are still relevant. Whether they've experienced such behavior themselves or followed this year’s barrage of #metoo scandals, readers will recognize the plight of young women who can neither safely accept nor reject the advances of older, more powerful men. Until, recently, when such stories go public, damage to character and career usually redounds upon the woman, rather than the man.

...readers will recognize the plight of young women who can neither safely accept nor reject the advances of older, more powerful men.

Many Victorian novels portray women who are besieged by men they don’t like (one of the comedic gems of Austen's classic Pride and Prejudice is the protagonist's disgust with her bumbling cousin's proposals) but Wives and Daughters is especially relevant to the current dialogue about the nuances of sexual conduct, because it portrays a complicated heroine, one who at first desires and then repudiates her suitor. Victorian mores held that a woman could commit to only one lover, and that to change her mind even once was evidence of a deceitful or even sexually loose character. Preston can’t even conceive that woman might change her mind after falling in love; he argues that since Cynthia loved him once, she’s obligated to do so again. More importantly, Preston weaponizes these social strictures against Cynthia. She’s not worried about landing a role or a promotion, but in a world where women can’t work at all it’s imperative that she preserve her reputation long enough to get married.

Preston can’t even conceive that woman might change her mind after falling in love; he argues that since Cynthia loved him once, she’s obligated to do so again.

Similarly, even today any hint of sexual desire or invitation of male attention can be used against women who come forward with accusations of sexual assault. The #metoo movement has been most successful in mobilizing support for the most flagrant and highly corroborated instances of sexual assault. It required 87 women presenting similar cases of assault to take down Harvey Weinstein. On the other hand, an anonymous woman who accused Aziz Ansari of sexual misconduct was roundly attacked for the allegations of assault; having consensually entered Ansari’s apartment, her detractors said, she had invited his advances and forfeited her right to complain about what came next. Likewise, when Dr. Christine Blasey Ford came forward with allegations against Brett Kavanaugh, her credibility was compared favorably to Anita Hill, who brought similar allegations against Clarence Thomas, another Supreme Court nominee, in the 1990s. While Blasey Ford was able to demonstrate that she was never involved or even friends with Kavanaugh before or after the alleged assault, Hill’s detractors successfully contended that since Hill opted not to quit her job after being harassed, she demonstrated a kind of consent. When an accuser has been involved with a man, flirtatious or even friendly towards him, her behavior can be interpreted as justifying – even inviting – any kind of sexual behavior.

Gaskell isn’t always kind to Cynthia. Her darling is Molly, who falls in love once and for all and never gives any man the wrong impression. Eventually, Roger too realizes that Cynthia’s “inconstant” character isn’t good enough for him and transfers his affections to Molly (incidentally, no one ever faults him for changing his mind). What prevents the novel from becoming a depressing morality tale is Cynthia’s modest triumph. Victorian novels often consign coquettish women to bad marriages — or worse, spinsterhood. On the contrary, Cynthia marries a wealthy lawyer, Mr. Henderson, who accepts and admires her complexities. While Cynthia felt constrained by the docility Roger expected from her, when she tells Henderson plainly that "I know I'm not constant," he responds firmly that he likes her the way she is. Not only does Cynthia secure a husband, she does so without “improving” herself at all. In a society that makes marriage the ultimate test of a woman’s character, this outcome validates Cynthia.

Not only does Cynthia secure a husband, she does so without “improving” herself at all.

While Gaskell never openly questions Victorian norms, she implicitly makes room at the table for Cynthia’s complex sexual identity. One of Cynthia’s most striking characteristics is her unswerving confidence in herself. Even when Molly loses respect for her, she refuses to justify her behavior or admit to any wrongdoing. To Molly, this is evidence of Cynthia’s willfulness and pride; to me, it reads as a poignant defense of the right to a complex and evolving inner life in a society that demands that women’s desires and intentions remain fixed and static. It’s inspiring to come across such a modern heroine in a faraway time, but less so to realize that, a 150 years later, we’re still fighting Cynthia’s battles.