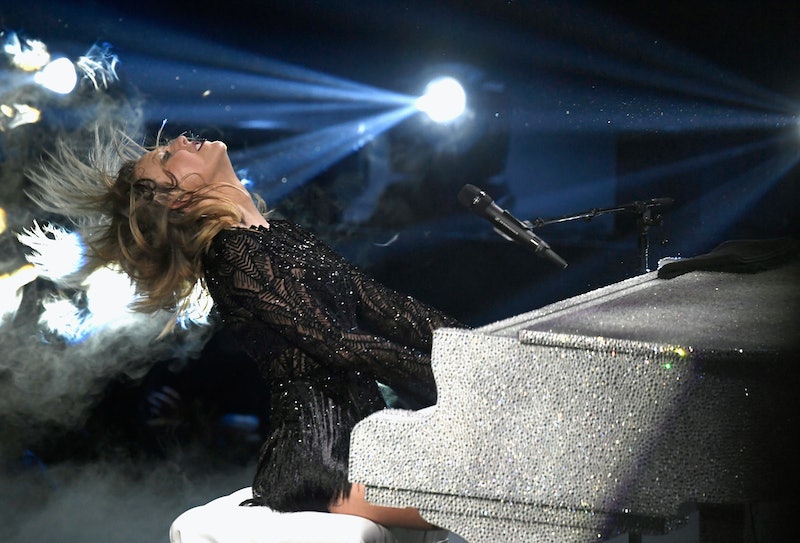 On Saturday night, Taylor Swift surprised her fans by unexpectedly dropping a new single off her forthcoming album Reputation. In the song, titled "Ready for It," Swift showcases her rap abilities, which excited many fans. But what's equally exciting about Swift's new single is that in "Ready for It," Swift takes back control of her love life — or suggests that she's going to, at least.

In "Ready for It," which is essentially a pop song with short segments of rap, Swift portrays herself as a force to be reckoned with when it comes to romantic interactions. "Me, I was a robber," she raps. "First time that he saw me / Stealing hearts and running off and never saying sorry / But if I'm a thief then / He can join the heist." Describing herself as someone who steals hearts is a far cry from the most popular songs off her first albums. Compare the lyrics of "Ready for It" with those from "Teardrops on My Guitar." In the hit song off Swift's 2006 debut album, Swift sings about unrequited love for her best friend. "He says he's so in love, he's finally got it right," Swift sings in that 2006 tune, in her country twang that brought her to stardom. "I wonder if he knows he's all I think about at night."

Being in love with someone who doesn't love you back is a theme Swift returned to her next album Fearless, released in 2008. In "You Belong With Me," Swift deprecates her own appeal, which has gone seemingly unnoticed by her best friend and love interest:

Again, early Swift portrays herself as an ignored girl, relegated to the friend zone. And what's even more pronounced in "You Belong With Me" than in "Teardops on My Guitar," is just how little Swift — at least as illustrated in her singer's persona — is willing to do to pursue the person she longs for.

Swift's transformation from an ignored girl full of longing to a woman who acts upon her desires can be seen in "Speak Now," the namesake track from her third album. In the song, Swift is at her former lover's wedding, where he will marry a woman Swift finds repugnant. As the ceremony commences, Swift hides behind a curtain and interrupts the matrimony when the pastor asks for all present to "speak now or forever hold your peace," Swift bursts out from her hiding place and begs her former lover not to marry his bride-to-be. He is shocked but pleased by Swift's appearance and abandons the other woman at the altar. Nonetheless, though Swift speaks her desire, she does so hesitantly, highly conscious of behaving like a polite woman: "I am not the kind of girl, / Who should be rudely bargin' in on a white veil occasion," she sings in her repeating chorus, as if to emphasize how bad she feels about acting on her own wishes.

To fast forward to a more recent incarnation of Tay: In the 2010 "Speak Now" Swift's persona was ready to pursue her beloved, albeit highly cautiously. But for the next iteration of T-Swift, falling in love comes at a price: sometimes, it means being treated badly. In the 2014 hit song "I Knew You Were Trouble," Swift does let herself fall for another, but after the affair is unsuccessful, she is full of regret. Placing herself as the victim of a cruel lover, Swift blames herself: "I knew you were trouble when you walked in," she sings. "So shame on me now." And furthermore, rather than focusing on what she gained from the unsuccessful love affair, Swift focuses on what her victimizer gained: "A new notch in your belt is all I'll ever be," she sings. "And now I see, now I see, now I see."

But "Ready for It" as well as in the other single dropped from Reputation "Look What You Made Me Do" signal a major shift in Tay's conception of herself as a lover. She not only comes off as an active agent in her own love life — someone willing to pursue her desires — but she also does not see herself as a victim of a cruel lover. In "Look What You Made Me Do," Swift suggests that she's done being a fool for love. Her song opens with: "I don't like your little games / Don't like your tilted stage / The role you made me play / Of the fool, no, I don't like you." And later on, Swift says she's done with unfortunate love affairs with unkind lovers. "But I got smarter, I got harder in the nick of time," she says. "Honey, I rose up from the dead, I do it all the time." Like a phoenix from the ashes, Swift, it seems, is reimagining herself as a powerful woman when it comes to romance, leaving behind the jilted girl character. Whether or not this plays out in actual life, we will have to see.