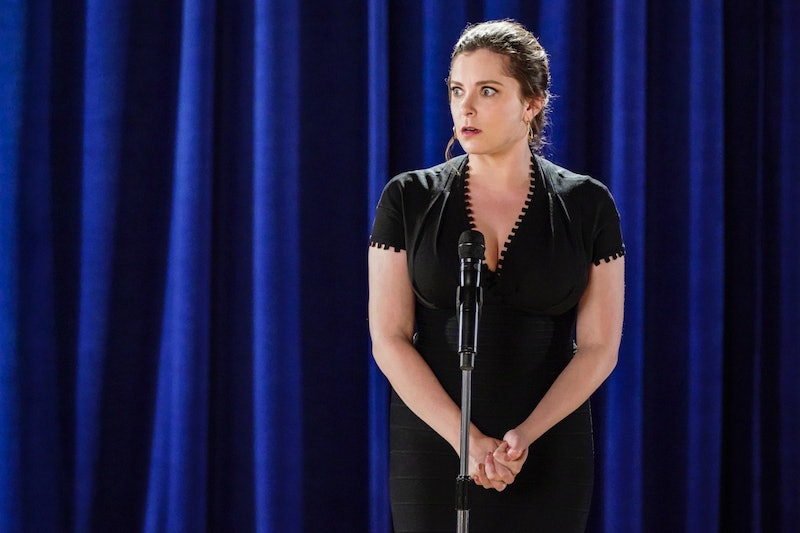 Spoilers ahead for Crazy Ex-Girlfriend Season 4, Episode 7. Online dating is notoriously difficult, but did Rebecca really have to use her prison mug shot as a profile picture? In Crazy Ex-Girlfriend Season 4, Episode 7, the West Covina favorite begins practicing radical honesty in the name of self-improvement. And while her intentions are good, she begins making people uncomfortable with her truth bombs, which she drops seemingly without warning. However, after some much-needed advice from her friends, Rebecca learns that honesty doesn't necessarily mean oversharing — a lesson that, frankly, the whole of the internet could use.

Case in point, her dating app (which is called Stranger Arranger, by the way) description, where Rebecca's "hobbies" include "Group therapy for Borderline Personality Disorder" and warns that she's been known to stalk her ex-boyfriends. "Wow," Josh says after reading Rebecca's bio. "That is an...honest profile." "Look, lying is bad for me!" Rebecca responds. "It's a slippery slope! I tell one little lie, and next thing you know, jail." Josh astutely points out that white lies are OK sometimes, explaining that he doesn't mention how gluten makes him gassy or that his back handspring needs work on his own dating profile. In other words, coming on too strong can sometimes be just as bad as burying the lede. It's all about nuance, which Rebecca should understand more than anyone.

That said, there is a time and a place to be completely forthright. In this episode, Rebecca returns to New York because her mom, Naomi (Tovah Feldshuh), is being honored by her Jewish charity. And since the two women have a complicated relationship, Rebecca is dreading what she knows will be a tough conversation. However, she's surprised to learn that Mrs. Bunch already knows about all her latest penitentiary-related escapades. "What, you think that I don't have a Google Alert for Rebecca Bunch?" her mom balks. "You think that I'm not reading the comments section of the Daily Covina?"

However, Naomi is upset to learn that Rebecca has left her job, and performs an angry song called "Forget It." While the musical number doesn't even come close to the heralded Naomi Bunch classic, "Where's the Bathroom?" it still includes the choice line, "You haven't caused me so much pain since my episiotomy." Naomi is then joined by four other upset moms, all of whom echo her disappointment, except for a passive-aggressive, Midwestern woman, who weakly smiles and insists that "everything's fine."

However, the show must go on, and Rebecca proceeds to help her mom plan the event. Except, as luck would have it, Rebecca's old New York rival shows up. That's right, Audra Levine — with whom she'd previously JAP battled — shows up with her mom to help out (read: gloat over and make digs at the Bunch women). Not only is she pregnant with triplets (all boys!), but she and her husband had to move into an even bigger Tribeca apartment to accommodate their growing family! However, Rebecca promised not to embarrass her mom, so she bites her tongue and doesn't mention her latest career move.

Later, Beth and Valencia ask Rebecca if she came clean to her mom's friends, but she says no. "I don't need to tell everyone everything all the time," she reveals. "I mean, really — using my mug shot as my dating profile pic? What's that about? I don't need outside approval from others, and I certainly don't need outside judgment from people I frankly don't care about." This is a great point, since telling Audra about Rebetzel's would only make things worse and invite more judgment on herself. And while she later tells Josh that she doesn't care what anyone thinks, it's also important that she protect herself from unwanted commentary, too.

But that's not the only progress Rebecca makes in this episode. She also puts her foot down when her mom tries to get her re-hired at her old law firm. "Now you respect me and my boundaries, or we will have no relationship at all," she demands. "Do I make myself clear?" And for once, Naomi agrees to her daughter's terms. It looks like honesty really is the best policy, after all — at least, in the appropriate doses.