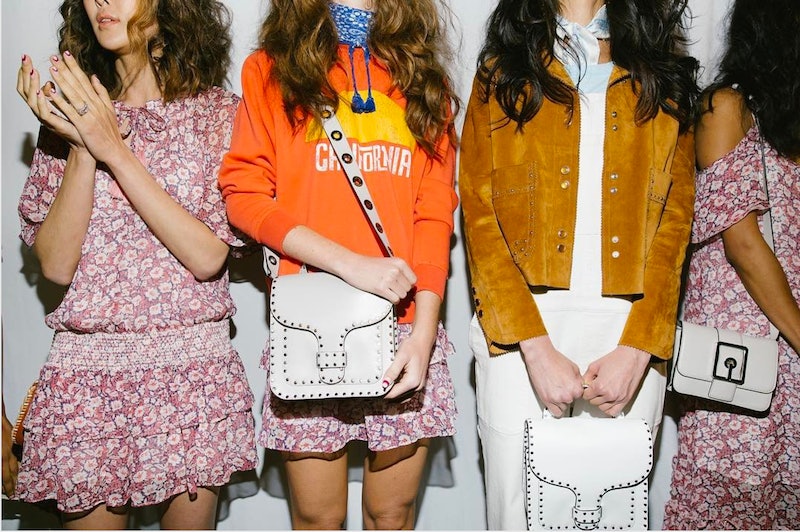 New York Fashion Week is about to begin in just a few days and fashionistas all around the world are getting excited. But while most people are headed to the Big Apple to get their fashion fix, many others gathered in Los Angeles to witness Rebecca Minkoff's Spring 2017 collection last Friday.

As part of the "See Now, Buy Now" concept, Minkoff showed her most recent collection at The Grove shopping mall. Minkoff's collection was inspired by the women of 1970s California and her Southern Californian roots, which led to her decision to show in Los Angeles this year. Carefree, effortless and simply cool — you could feel and see that energy in both her collection and the beauty looks of her models.

"[Rebecca's] whole collection is all about effortless beauty, so it's definitely one in which the makeup really had to reflect that, it couldn't be overly done. One of the phrases she said was 'California sunset,' and she had me at California sunset," Smashbox's Global Pro Lead Artist Lori Taylor tells me.

"What you'll see on the girls with a fair to medium tone — they have more amber and gold tones on which are so reminiscent of the perfect sunset. And then the girls that are a little deeper medium-dark, there's has a little tinge of orange and maybe a hint of something that has a little bit of cranberry. It's almost that six or seven o'clock hour when the sun gets ready to set."

"One of things Rebecca said about the collection is that it's all about female empowerment, so she really wanted the girls to look like themselves, to own their look," Taylor says. Taylor also put some primer on the eyes and cheeks to create a natural glow to the skin and added some freckles to create a more youthful look.

For the nails, Minkoff, Essie's global color designer worked with the nail polish brand's Michelle Saunders to keep the pattern of "California sunset," using warm pinks, nudes, and a deep wine to create a rainbow pattern, mimicking the tones of a sunset. The carefree vibe from the '70s, the California surf scene, and retro graphics of the time also inspired the runway nail look.

As a part of the "See Now, Buy Now" experience, Essie released the exact bundle of colors used on the models on Amazon, where you can get all the colors needed to create the art at home.

Perhaps the most buzzworthy part of the show, however, were the models. Minkoff enlisted some of her best fashion friends and influencers to participate in the show, including Aimee Song, Coco Rocha, Victoria Justice, Jamie Chung, and Pyper America Smith. The models arrived onto the scene after riding a trolley and then descended down the runway to a wicked playlist that finished off with a live performance from MILCK and the #ICantBeQuietChoir, who performed that the Women's March in Washington D.C..

The collection included breezy, bohemian dresses and vibrant colors, which paired perfectly with the loosely waved, voluminous hair provided by Glamsquad. As they walked, the group of fearless, carefree women oozed effortless confidence, which is the true signature of Minkoff's style.

The best part? You can buy the adorable dresses and handbags from the runway right now. As part of the new "See Now, Buy Now" concept, everything shown on the runway was available at the Rebecca Minkoff pop-up store on location, and is available online now. Yay!