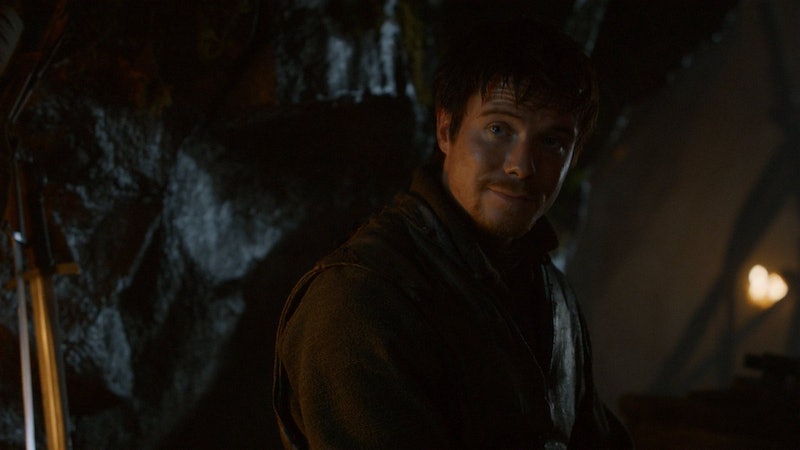 As far as the citizens of Westeros are concerned, House Baratheon is extinct, but true Game of Thrones fans know that there's a certain Flea Bottom boy on a boat who could represent this noble family in the war to come. What has Gendry been up to on Game of Thrones? Robert's grown-up bastard son is officially returning in Season 7 to continue his underdog journey, so here's a quick recap of where he started.

The first time we saw this potential front-runner for the Iron Throne, he was a humble blacksmith with a custom-made bull helmet who kept getting bothered by Hands of the King with questions in King's Landing. Jon Arryn came asking questions about Gendry's parentage a few weeks before he died — and then Ned Stark did exactly the same thing while investigating Jon's death.

King Joffrey may have had no problem finding (and killing) Robert Baratheon's many bastards, but this one was more of a mystery. Granted, I think Jon Arryn's research had more to do wth recessive genes than one paternity test. He was trying to prove that the King, with his dark features, could not produce blonde children with any woman. Gendry's mother had yellow hair just like Cersei, but he didn't look like Joffrey, Myrcella, or Tommen. That is, of course, because they are all Jaime's children and Lannisters. Gendry may be a bastard, but he's the only true Baratheon left.

He managed to escape Joffrey's purge of King's Landing by joining a group headed to the Night's Watch. What other highborn hero was hidden among those ranks? The youngest Stark girl, disguised as a boy named Arry. Clever fake name, Arya.

Anyway, the two of them bonded on the road. Arya was not even a teenager at the time, but I was still kind of future 'shipping them. Their friendship is one of the purest on the show. They were captured by the Lannister army, lead by Tywin, for most of Season 2.

They spent some time in Season 3 captured by the Brotherhood Without Banners — at which point, Gendry decided to part ways with his would-be lady and join the Brothers. Not only are they the only family he has ever known, but they are more about democracy than servitude. Arya was crestfallen. My heart broke right with her. It was all very sad.

Unfortunately, while the Stark girl joined The Hound for another hilarious road trip, Gendry's journey took a turn for the worse. The Brotherhood sold him to Melisandre for two sacks of gold. She took him to Dragonstone, told him the truth about his father, seduced him, and stole his Baratheon blood using leeches. She used that blood for a spell that, if you believe in such things, resulted in the death of Robb Stark, Balon Greyjoy, and Joffrey Baratheon.

After being used by the Red Priestess, Gendry was locked up in a cell. In the final episode of Season 3, Ser Davos helped to escape by rowboat. He hasn't been seen since, though there are memes a'plenty that imagine him rowing along.

Where has he been all this time? It's possible that he was able to join the Brotherhood Without Banners as he originally wanted, and just hasn't been seen yet. After they sold him out, I doubt he'd want to go right back to them. It's also possible that he's still hiding away in Dragonstone, and didn't get very far in that rowboat.

All will be revealed when Gendry returns. With Stannis and Shireen gone, it will be interesting to see what happens to the final Baratheon next — and who he meets up with in Season 7. Arya could use a friend right now, and both his lineage and political beliefs open up some interesting possibilities for the future of Westeros.