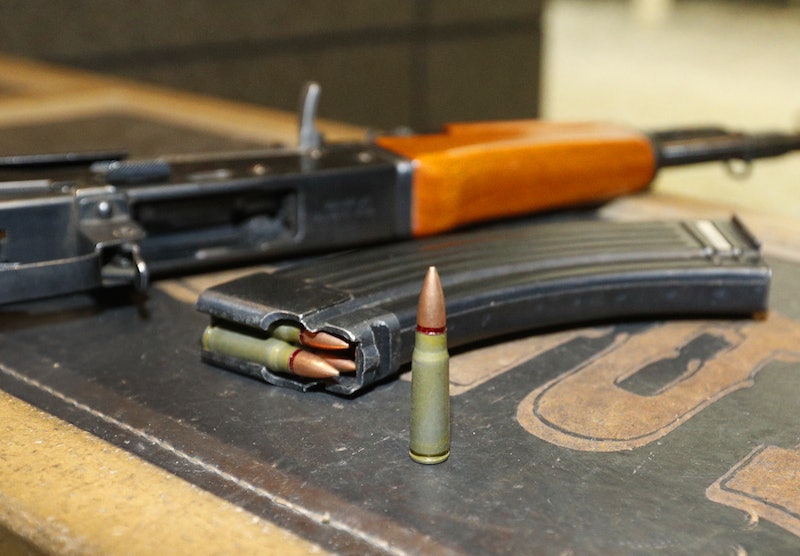 Just when you think the gun control debate in America has reached peak levels of horror, it goes up another notch: the latest recording of a New York Times reporter getting threatened with an AK-47 over the phone is flat-out scary. The incident is one of multiple instances to occur recently, where mainstream reporters have been threatened with serious violence via anonymous phone calls. This time, the threat was to Kenneth Vogel.

The threat was released by Vogel onto his Twitter feed later, when he referenced a "voicemail from a fan."

Hey Ken, just watching you on MSNBC ... you're a genius. Your insight is just genius. I mean, let's face it: Hillary lost. You supported a criminal. You still support that criminal. You’re the problem. You are the enemy of the people. And although the pen might be mightier than the sword, the pen is not mightier than the AK-47. And just remember Ken, there’s nothing civil about a civil war.

Vogel has not yet released any sort of statement on the incident, beyond his tweet about it. However, the reference of a "pen being mightier than a sword," and of an AK-47 being "mightier than a pen," is one that's been used more than once against other reporters, leaving some to wonder if it's been the same person behind more than one threat.

New York Times columnist Bret Stephens received similar threats from an anonymous caller who also referenced the mightiness of weaponry over pens. In an op-ed for The New York Times, Stephens wrote that his voicemail said,

Hey Bret, what do you think? Do you think the pen is mightier than the sword, or that the AR is mightier than the pen? I don’t carry an AR but once we start shooting you f—ers you aren’t going to pop off like you do now. You’re worthless, the press is the enemy of the United States people and, you know what, rather than me shoot you, I hope a Mexican and, even better yet, I hope a n— shoots you in the head, dead.

Journalist Sulome Anderson was the one who first made the connection between the multiple calls potentially all coming from the same caller, as she tweeted in response to Vogel's tweet, "Didn’t @BretStephensNYT get the same call?"

She added in a subsequent tweet, "If this guy is repeatedly calling journalists and saying the same thing, something needs to be done. This is dangerous."

But even if Vogel and Stephens' threats come from the same man, it's assuredly not one person making all of these calls. On Aug. 5, a C-SPAN caller threatened to shoot hosts Brian Stelter and Don Lemon in a televised phone call, saying, "[Stelter and Lemon] don’t even know us. They don’t even know these Americans out here and they’re calling us racist because we voted for Trump. They started the war. If I see ’em, I’m going to shoot ’em. Bye."

While sharing the call (which can be heard in the clip above), Stelter pointed out that the call occurred immediately after Fox News' Sean Hannity played a clip in which Stelter questioned if racial anxiety had been a contributing factor to Trump's rise to power. “I don’t know if the C-SPAN caller watched Hannity," Stelter said, "I’m not blaming Hannity. I just thought the timing was odd.”

In his op-ed for The New York Times, Stephens pointed out what he believed to be an inevitable conclusion to the rising violence against reporters, in the wake of such threats, as well as the Capital Gazette shooting.

"[Some of Trump's supporters] didn’t get the memo about taking Trump seriously but not literally," Stephens wrote. "A few hear the phrase “enemy of the people” and are prepared to take the words to their logical conclusion. Is my caller one of them? I can’t say. But what should be clear is this: We are approaching a day when blood on the newsroom floor will be blood on the president’s hands."