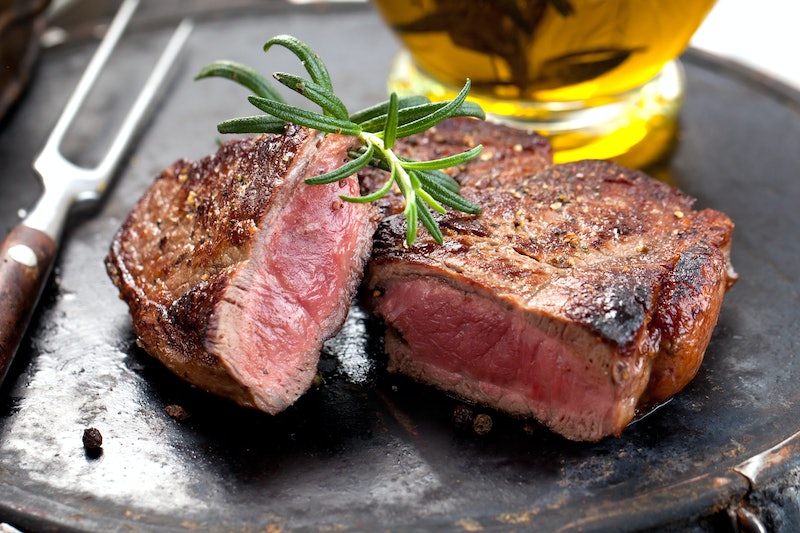 For years, dietary advice has suggested that people should lower their intake of red and processed meats because of potential health issues, including higher risk of cardiovascular illnesses and cancers. Now, a new and controversial review of the science around meat consumption has been released by a consortium of scientists, and it claims that the evidence for lowering your red and processed meat isn't strong enough to alter your diet. However, other nutrition researchers aren't necessarily convinced by the consortium's findings.

The review was published in the Annals of Internal Medicine by a panel of scientists who performed five systematic reviews of studies involving 4 million people and their red and processed meat consumption. They delivered a surprising conclusion: the idea that cutting down on either could help health, they said, isn't based on enough evidence to be taken as universal advice.

“The certainty of evidence for these risk reductions was low to very low,” Bradley Johnston, a lead researcher in the group and epidemiologist at Dalhousie University in Canada, told The New York Times. (Johnston did not respond to a Bustle request for comment.)

One of the most attention-getting areas of the study is their conclusion about randomized trials. "For our review of randomized trials on harms and benefits (12 unique trials enrolling 54,000 participants), we found low- to very low-certainty evidence that diets lower in unprocessed red meat may have little or no effect on the risk for major cardiometabolic outcomes and cancer mortality and incidence," the study says. In other words, according to the scientists' interpretation of the data, the people in those studies who either ate red and processed meat or ate little to none didn't see much difference in their heart health or cancer rates, contrary to previous evidence from other sources that showed the opposite.

The response to the findings from other scientists has supported the previous recommendations, which is that red and processed meats are harmful to health.

"This study does not change what we know about eating red and processed meat: heavy consumption of both of these foods places a burden on our health and places us at higher risk for chronic disease," physician Dr. William Li, author of Eat To Beat Disease, who was not involved in the study, tells Bustle. Dr. Li says that the methodology of the study should be closely examined. "The use of a systematic review technique to examine evidence when there are very few studies available is a big methodological weakness. The quality of the conclusions are as good as the quality and number of the studies used for the research."

More troublingly, scientists at Harvard's T.H. Chan School of Public Health said in a public statement that the researchers behind the new recommendations may have misinterpreted the data of the studies they were examining. "Among the five published systematic reviews, three meta-analyses basically confirmed previous findings on red meat and negative health effects," the Harvard scientists said in their statement. "Existing recommendations are based on solid evidence from randomized controlled studies with cardiovascular risk factors as the outcomes, as well as long-term epidemiologic studies with cardiovascular disease, cancer, type 2 diabetes, and mortality as outcomes."

Cancer authorities in particular have rejected the new recommendations. Dr. Giota Mitrou, director of research at the World Cancer Research Fund, told The Guardian that these new recommendations “could be putting people at risk by suggesting they can eat as much red and processed meat as they like without increasing their risk of cancer." He added that the Research Fund stands by its research over the past 30 years, which recommends cutting back on red and processed meats.

So why the big disagreements? A large part of the issue here, commentators explain, is that there's a big difference between interpreting data and turning it into dietary recommendations. Aaron E. Carroll, Director of the Center for Health Policy and Professionalism Research at the University of Indiana, who summarized the findings for the Annals, wrote in an editorial for the New York Times, "When the U.S. Preventive Services Task Force lacks sufficient evidence to publish recommendations on prevention, it gives recommendations an “I” rating, and says the current evidence is insufficient to assess the balance of benefits and harms. That’s all. Maybe that was preferable here, instead of publishing recommendations that people continue their current meat consumption." Dietary science is also complicated, because humans don't eat in a vacuum; they also have many other habits, preferences and health conditions that can affect them in many different ways, and can also misremember the food they've eaten when asked by scientists.

For Dr. Li, the new review doesn't undo the considerable amounts of data that suggest eating high amounts of red and processed meat, which are common in the Western diet, can have poor health outcomes for some people. "The average person should know that eating small amounts of meat occasionally will probably not be harmful, but the overwhelming body of evidence shows that regular consumption of high quantities of meat can compromise your body’s ability to defend against many chronic diseases," he tells Bustle.

The conversation about red and processed meats should not ignore environmental consequences; while beef cattle aren't as bad for the environment as we once thought, the U.S. cattle industry still creates significant greenhouse gas emissions and consumes a lot of water, according to data from 2019. Cutting down on red meat may be good for the environment, though campaigners make it clear that small dietary shifts may actually be more sustainable than pressuring everybody to give up meat altogether.

Ultimately, if you want to cut down on red meat, then there's no reason not to. If, however, you love a bit of bacon or some tasty saucisson every once in a while, it's worth remembering that dietary guidelines are general, and that it's best to make choices based on your own individual needs and health.