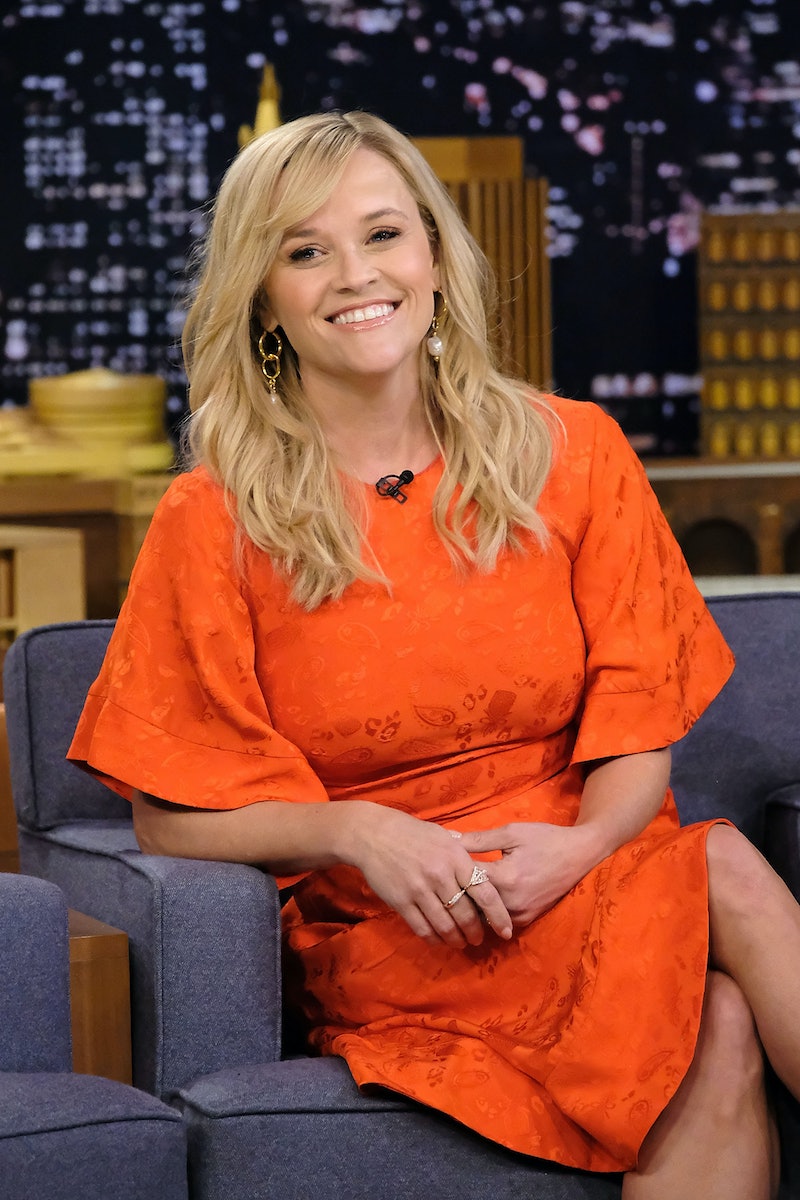 She may have nailed the bend and snap as Elle Woods, but Reese Witherspoon dancing at a Harlem Globetrotters game takes her dance skills to a whole new level. On Feb. 17 at the Staples Center in Los Angeles, the Oscar-winning actor took to the basketball court with Globetrotter Ant Atkinson and showed off some seriously impressive dance moves, as pointed out by Entertainment Tonight. After you watch her in action, you'll definitely want to hit the club with Witherspoon.

Atkinson pulled the producer out onto the court (she also attended the game with her husband, Jim Toth, and their son, Tennessee), but Witherspoon appeared a bit hesitant at first. Believe it or not, she didn't want to leave her purse behind. Who knew Witherspoon channeled Sophia from The Golden Girls?

The Big Little Lies actor quickly forgot about her purse, because Atkinson changed the topic to informing Witherspoon, "When I was sitting over there with you Reese, you rocked my world." Before the audience knew it, Atkinson and Witherspoon were dancing it out together — and doing a really good job at it too.

There's no denying the Legally Blonde star is extremely talented in a variety of fields, but Witherspoon's clearly been keeping her amazing dancing abilities to herself. Just watch for yourself (around the 20-second mark), and you'll understand.

Eventually, Atkinson stopped the music and joked that her moves were too scandalous for the family event. He yelled, "Reese! There are kids in here!"

The best part of Atkinson and Witherspoon's dance session is that in the background Charlize Theron was rooting on her fellow colleague. Theron can be seen to the left of Atkinson in the white shirt and baseball cap. Take a look:

She immediately started smiling and clapping to the beat of the song and, most likely, for Witherspoon being such a good sport by letting out some top-notch dance moves. Theron's daughter, August, also got into it by moving her arms to the music with help from her mom.

In addition to Theron, Laurence Fishburn (to her left) was also clapping for Witherspoon and letting out a hearty laugh. As the Harlem Globetrotters tweeted on Feb. 17, Witherspoon, Theron, Fishburn, and Usher all attended the same game.

If you think Atkinson let Witherspoon sit down after they finished dancing, you're wrong. He pulled Toth onto the court and had the couple dance to The Temptations' "My Girl," as he serenaded them in honor of their nine years of marriage. It definitely made for a cute and memorable moment.

Oh, and when Toth and Witherspoon completed their dance, one of the Harlem Globetrotter players walked over the her purse. How funny and kind of him, right?

As you can see above, Witherspoon also danced it out in her seat with several of the players, including Bull Bullard who took her phone and filmed a video. She captioned the Instagram, "When one of the #harlemglobetrotters steals your phone #danceitout."

What does all of this mean? Witherspoon needs to make a movie involving dance somehow immediately, and maybe even with Theron. Thank you to Atkinson for getting her to bust a move and letting the world know how fantastic of a dancer she truly is.