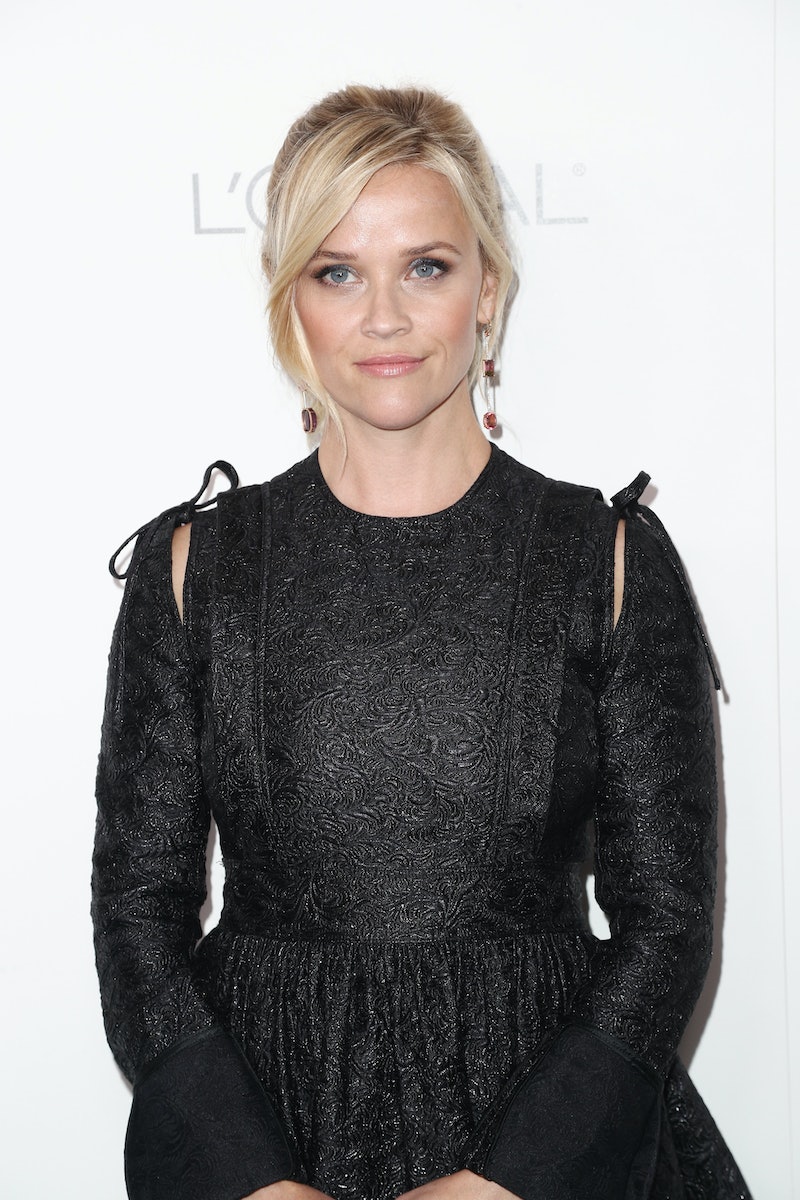 In 2017, the entertainment industry confronted it's culture of sexual harassment and abuse. It was a long-overdue and defining moment, and many women in the Hollywood are committed to continuing the conversation and promoting change. Reese Witherspoon & Eva Longoria will lead the Time's Up Movement at the 2018 Golden Globes on Sunday, Jan. 7, in a show of solidarity with women working in entertainment and other industries. The Time's Up initiative was spearheaded by influential women in Hollywood, and published a mission statement on New Year's Day 2018. The website reads: "TIME’S UP is a unified call for change from women in entertainment for women everywhere. From movie sets to farm fields to boardrooms alike, we envision nationwide leadership that reflects the world in which we live." Time's Up will act as a legal defense fund and look to fix systemic injustice in the workplace. Witherspoon and Longoria will champion the cause on the red carpet for the Globes and throughout the awards.

The Golden Globes has a responsibility to center women and their experiences in the entertainment industry, which is notorious for gender inequality and the Time's Up is offering a way forward for the industry. The awards on Sunday will be a chance for the movement to raise awareness and gain further momentum, with Longoria and Witherspoon leading the charge. In December 2017, many nominated actors and presenters announced the plan to wear black to the awards. The founders of Time's Up want to make it clear that the statement isn't about style but rather showing solidarity with the victims and survivors. "This is a moment of solidarity, not a fashion moment," Longoria told the New York Times. "For years, we’ve sold these awards shows as women, with our gowns and colors and our beautiful faces and our glamour. This time the industry can’t expect us to go up and twirl around. That’s not what this moment is about."

In the past, Longoria and Witherspoon spearheaded the #AskMeMore campaign, which encouraged reporters to ask women more thoughtful questions on the red carpet. In 2015, Witherspoon became a major advocate for the movement before the Oscars and offered alternative questions hosts could ask in lieu of "who are you wearing?". In the past, men have been offered the opportunity to discuss their careers during red carpet pre-shows, but for women, the conversation usually ended at their fashion choices. This double-standard represented another inequity in the industry, and hopefully red carpet reporters will keep the campaign in mind as they conduct interviews on Sunday.

On Jan. 1, Time's Up published a letter outlining the organization's mission. The founders recognized the enormous privilege of their platform, and committed themselves to elevating the voices of women in other industries who don't have the same opportunity to speak out. It was signed by over three hundred women in Hollywood. The Golden Globes will likely provide a platform for Longoria, Witherspoon, and other actors to raise awareness for the movement and further its goals.

In addition the wearing all-black ensembles, viewers are likely to spot many stars wearing "Time's Up" pins in support of the movement. Witherspoon reportedly asked costume designer Arianne Phillips to design the pin during the meeting where Time's Up was founded. According to the Hollywood Reporter, Witherspoon invited Phillips to the gathering and approached her about designing the pin.

"Reese asked me to come to the actors' group, and told me they were going to be wearing black and would I consider creating a pin for the nominees and male presenters. We were up against the holidays, but I said I could do it," Phillips told THR. "“I met so many great women, and it was such an honor to be called to action." The designer, who has worked on films like Nocturnal Animals and styled stars like Lenny Kravitz and Madonna, also called on the fashion industry to donate to the Time's Up legal fund.

The fund has already raised over $15 million according to its GoFundMe page. This number is certain to go up after Longoria and Witherspoon raise awareness at the Globes on Sunday. The red carpet begins at 6:30 pm EST, where the two actors will lead the march. The show begins at 8 pm and host Seth Meyers, as well as nominees and presenters, are likely to bring up Time's Up initiative as well.