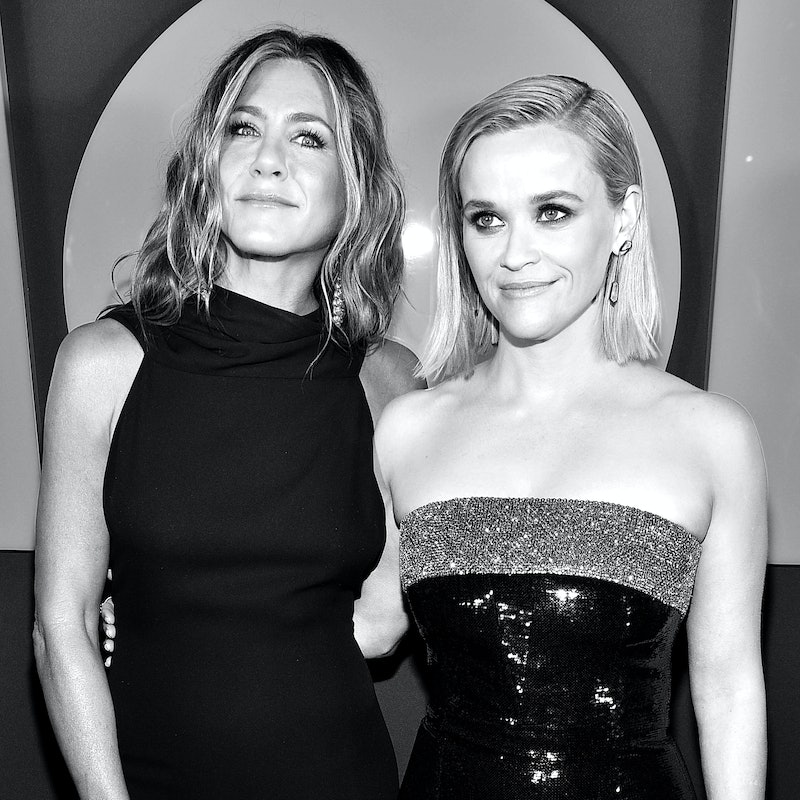 When it comes to TV dream teams, I can’t think of one much stronger than Jennifer Aniston and Reese Witherspoon. They’re two of the most talented women on screen and now they've joined forces for a new series, The Morning Show, which offers powerful commentary on the #MeToo movement. In an interview for the series, Aniston said that online streaming offers more "creative freedom" and Witherspoon agreed, saying it helped open up female roles beyond "wives and girlfriends."

The Morning Show airs on Apple TV+ and Witherspoon and Aniston both starred and were executive producers on the show. In an interview with BBC's Newsbeat, Aniston and Witherspoon explained the ways in which their new series addresses what’s gone on in the #MeToo movement over the last few years. The Morning Show follows the story of on Alex Levy (played by Aniston) and her colleagues as they come to terms with the fact that Levy's co-host for over a decade (played by Steve Carell) has been accused of sexual harassment.

Speaking about the central storyline Aniston said to the BBC, “‎It would feel irresponsible not to address it, considering it was happening in the culture as we were telling ‎the story. We were all made very aware that darker stuff than I could ever imagine was going on."

She also said, ‎"I think we're all finding our way in this cultural shift and learning what role we play, so it was important to ‎have men be part of that conversation. Steve Carell being part of the show was a huge thing. It was how ‎he decided to join the conversation about sexual harassment and sexism and ageism."

When asked by the BBC whether it was "difficult" to go down the streaming route, Aniston said "no, it was easy, because of the creative freedom that we have as storytellers is so much greater." Witherspoon added:

"They have empirical that audiences are out there and they're are very diverse. They're 50% women, ‎and those stories weren't being told. Women had a narrow range of things to play. A lot of wives, a lot girlfriends, and that's just not the full spectrum of the female experience. So I've found, with the emergence of streaming, we're getting much more diverse storytelling."

You can catch The Morning Show on Apple TV+, which is available on Apple for £4.99 a month.