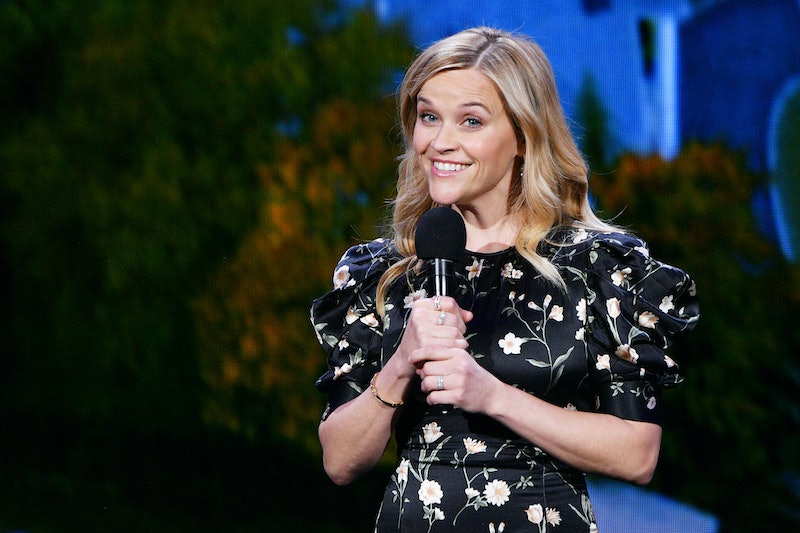 The pending launch of Apple TV+ means that a vast array of new streaming content will soon be at your disposal. But out of all the projects currently in the works, the buzz surrounding The Morning Show, which stars Reese Witherspoon and Jennifer Aniston, is palpable, not only due to its star-studded cast, but because of its nuanced approach to the #MeToo movement. However, this wasn't the initial plan. During an interview with Harper's Bazaar, Witherspoon revealed how The Morning Show changed after #MeToo, and the important role she felt the media needed to play in the movement.

"When we started, the show was just a book, and nothing had happened with Harvey Weinstein or Les Moonves yet," Witherspoon told the outlet, referencing the sexual misconduct allegations against both men. "Then, in October 2017, all those stories started to break about the way women in media were treated." All of a sudden, the project changed. "We decided we needed to start from square one and redevelop everything with more of a slant about the truth coming out in media and people being held accountable for their behavior," the actor and producer explained.

However, that goal came with its own fair share of challenges, particularly when it came to depicting the side of the story from the standpoint of the man being accused of misconduct. But at the end of the day, Witherspoon's goal was to shown the humanity that exists within all sides of the narrative.

"As artists, we try to find the shreds of humanity in any crisis and open people’s minds to see all sides of things. What does it mean to be a person who loses their entire life? Their family. Their career," Witherspoon explained, referencing the emotional toll and impact that the movement has had on numerous households for both the accusers and the accused. "I can’t even imagine what it must have been like to be the spouse or the child of one of these people who was exposed." But make no mistake, the show will hold men accountable for their actions. "With the men, we ask, Where is the contrition? How are they supposed to behave? We deal with all of these questions as the season goes on," Witherspoon said.

But while the man's part of the narrative is certainly explored, it's not the driving force of the series. That honor goes to The Morning Show's two leading characters, portrayed by Witherspoon and Aniston. The trailer mostly shows them at odds with each other, but it was important for Witherspoon to explore their power dynamics in a way that didn't further feed into the common (and overused) female trope of "catty" behavior.

"Our characters are two people with very similar goals but different ideologies because of their backgrounds," Witherspoon explained to Harper's Bazaar, adding:

"Jen’s character existed in a world that was dominated by men. Just the fact that she existed was all that mattered. My character is like, 'Hold on, no, no, no. If you’re not bringing other women with you, what are you doing?' It’s not antagonistic or competitive. It’s second-wave feminism meets fourth-wave feminism."

Just as The Morning Show aims to show the nuances of the consequences of #MeToo in the workplace, it's also interested in depicting the differences in how women approach feminism. There is no one size fits all, in either case.